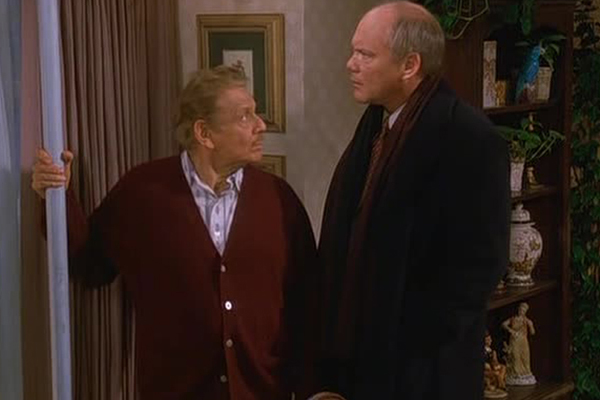 Man, it seems like Festivus gets here faster and faster each year. One day you’re putting up the aluminum pole, the next day you’re wrestling, and just like that, it’s over.

Festivus, as you recall, was started by Frank Costanza on Seinfeld after he nearly beat a man to death while fighting over a doll for his son (she was some doll). Celebrated every December 23, Festivus is a bare bones holiday with no decorations but a pole (tinsel is too distracting), and has great traditions like the airing of grievances and the feats of strength for the whole family to enjoy. It’s perfect for anyone who’s sick of the commercialization of the holiday season; truly, a Festivus for the rest of us.

We here at The Comeback got to thinking: what if the sports world celebrated Festivus this year? Who would air grievances, who would show their strength? And most importantly, who would wrestle at the end of the night to officially end the holiday?

The Airing of Grievances

Matt Stafford, January 4: The Lions and Cowboys were in the 4th quarter of a tight playoff game when a pass interference call against Dallas was overturned with no explanation from the refs. Stafford was wearing a mic and let the ref know what he thought.

Bryan Price, April 20: Reds manager Bryan Price really, really hates that the media asked him about the availability of his players. He’s got a lot of problems with you people, and you’re gonna hear about it.

Marcus Mariota, April 30: Mariota certainly is entitled to air a grievance or two when, on the biggest day of his professional life, the commissioner can’t even pronounce his name correctly. At least he didn’t call him Mulva.

Jim Tomsula, October 7: Look, the Niners are having a tough year. But instead of yelling and screaming about it, Tomsula has a different way to let the world know what he thinks about the season.

Kirk Cousins, October 25: Cousins was tired of… something, probably. Maybe the press doubting him? Who knows, but he aired his grievance in style.

The Feats of Strength

Brock Lesnar destroys everybody and everything, March 30: Sure, it’s WWE. But tell me it isn’t fun to watch Brock smash.

Wisconsin stuns Kentucky, April 4: The Wildcats looked unstoppable until they ran into the Badgers.

A’s vs. Royals, April 18: You could pick from a bunch of different Royals games this year, but this one seemed to perfectly sum up the Festivus feats of strength spirit.

Ronda Rousey destroys Bethe Correia, August 1: Probably the one moment this year Rousey would like to remember. An astonishing feat of strength.

McGregor drops Aldo in seconds, December 12: It was over before it even began.

OBJ goes crazy and fights Josh Norman, December 20: I will never understand throwing punches at the head of a guy wearing a helmet. Oh well.

That seems like a pretty good list. Did we miss anything? And who would face off in the ultimate feats of strength battle at the end of the night, like George and Frank did? I don’t know, but it probably should involve Donald Trump.

However, if there’s one play from 2015 that exemplifies the Festivus spirit – the airing of grievances, the feats of strength, and the damn aluminum pipe, it has to be Jose Bautista’s ALDS Game 5 home run against the Rangers, his epic bat flip, and the ensuing aftermath.