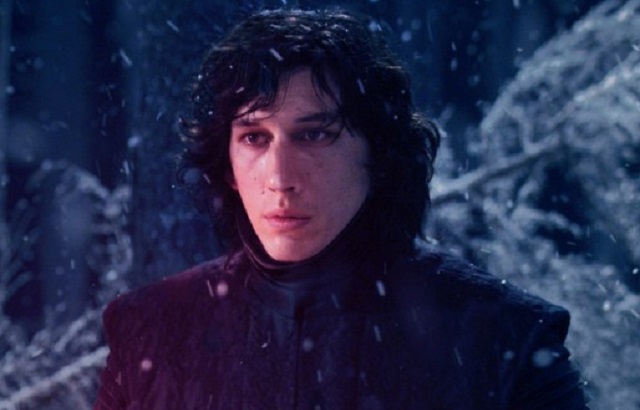 Though it would be fun and the timing would be right, there almost certainly won’t be a teaser trailer for Star Wars: Episode 8 attached to the release of Rogue One: A Star Wars Story this weekend. For one thing, the movie doesn’t even have a proper title yet. (Although a surprise teaser would be a great way to reveal one…)

Adam Driver, who played Kylo Ren in Star Wars: The Force Awakens, is currently doing press for his upcoming film Silence, directed by Martin Scorsese and co-starring Andrew Garfield. During an interview with CinemaBlend’s Sean O’Connell, the lack of an Episode 8 trailer came up, to which O’Connell asked Driver if he’d prefer no trailer coming out at all. Here’s how he responded:

“I think that’d be bold. I’d love it, yeah! Then no one would know anything. The less people know, I feel like, the more exciting… the more of an event it is.”

Of course, we all know that Driver is living in a dream world there, and O’Connell’s question was a playful one. But if there’s one movie that could be a huge success without a trailer, it’s probably the next Star Wars blockbuster.

Sure, there’s some basic information that the public needs to know, such as when Episode 8 is scheduled to hit theaters. (That’s Dec. 15, 2017, almost exactly a year from now.) Some basic story points are probably necessary to share, as well. Portions of the audience might need to be reminded of what happened in The Force Awakens, and there always needs to be at least a faint assumption that some people might be coming to a Star Wars movie for the first time.

(Would the general public know Rogue One was a Star Wars movie if the connection wasn’t made implicit in some of the marketing?)

Generating some excitement isn’t a bad thing, either. It’s a reminder, a peek behind the curtain that stokes anticipation for what’s to come. Two years ago at Thanksgiving, the release of The Force Awakens‘ first teaser trailer was a cultural event. It was fun, bringing together the global community of Star Wars fans excited for something new. That sort of shared joy shouldn’t be taken away. Never mind that the horse is out of the barn and ain’t ever coming back.

The problem is that promotion goes too far as studios get greedy and insecure. We have to reach every single person that can possibly be reached! So we get one or two teaser trailers, followed by two to three full trailers, each of which has to reveal just a little bit more — otherwise, what’s the point? And that doesn’t even include the blizzard of television ads, some of which could also have new footage. (Think of all the websites that derive content from every trailer release and each new TV spot that becomes available. It’s a business model and ecosystem.)

Driver brings up an intriguing point. How different and special could the moviegoing experience be if we didn’t see or learn anything about Star Wars: Episode 8 until seeing the film? I’ve often thought about that myself. For example, how fun would it have been if we didn’t see the new version of Spider-Man in Captain America: Civil War until he leaped onto the big screen? There have been more than a few superhero movies I’ve ruined for myself in recent years because I read and watched everything I could about them.

To Disney and Lucasfilm’s credit (along with Mr. Mystery Box himself, J.J. Abrams), there was a surprising amount of material and story developments in The Force Awakens that were not revealed in the avalanche of promotion. So the producers do appear to be trying to protect the audience from itself. But even something like Star Wars has to send a signal that needs to be heard through all of the pop culture noise out there. We could try to live in the world Adam Driver imagines and try to ignore all of that marketing, but how likely is that to happen?