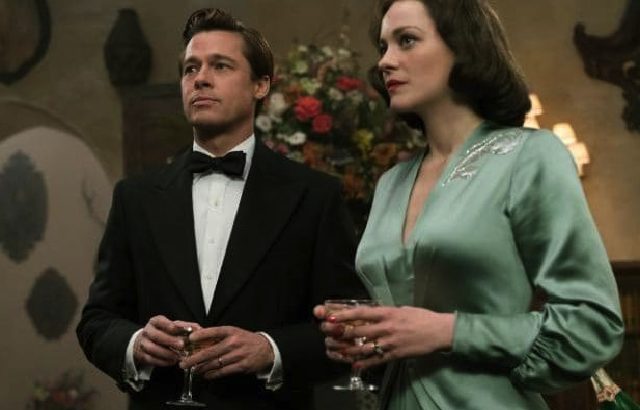 With Brad Pitt and Marion Cotillard starring in a spy thriller/action movie set in World War II, Allied certainly appears to be a film that could be both successful with audiences and a critical success that could garner major awards. The movie’s release in late November during Thanksgiving weekend — when plenty of people have time off and many families go to the theater — certainly seems to indicate lofty box office and awards ambitions for Paramount Pictures.

Unfortunately, Allied doesn’t fulfill those expectations and may compel many viewers to watch the other films that clearly provided inspiration.

Pitt brings his matinee presence to the film, but never seems engaged with the material. Perhaps it was an artistic choice to be buttoned-up and reserved in his role as Canadian intelligence officer Max Vatan, but throughout the film, Pitt seems almost bored, as if he was trying to figure out who this character was as the story progressed.

Is he a dashing soldier sent into French Morocco to kill a German ambassador and Nazi soldiers? Is he a cold, ruthless spy whose lifestyle has taught him never to become too attached to anyone or anything? Is he a devoted military operative? Or is he ultimately a family man trying to protect what little he has in a chaotic world?

The answer could be all of the above, but Pitt never seems interested in exploring the nuances of his character that the story presents. Maybe director Robert Zemeckis and screenwriter Steven Knight didn’t really give him the opportunity to do so, either. The problem might be that Pitt isn’t that great of an actor. Some might disagree with that, and he’s certainly done some excellent work in recent years (Fury, World War Z, The Tree of Life).

However, Pitt seems to thrive when he can zero in on an interesting quirk or all-encompassing drive to a character. Think of Billy Beane’s competitiveness in Moneyball. Rusty Ryan’s desire to scheme a great heist (and constantly munching on something) in Ocean’s Eleven. Or his consuming hatred for Nazis in Fury and Inglourious Basterds. There’s nothing about Vatan for Pitt to get a grip on, and maybe that’s why he seems almost disinterested here.

Even when Vatan presumably develops admiration, then affection, for Cotillard’s French Resistance fighter, Marianne Beauséjour, it just never seems believable that he’s falling in love with this woman. He never appears to feel any sort of devotion to the woman who progresses from his fellow spy to his wife, unless he says so in dialogue or the story requires him to take action in defying his superiors to defend her honor or save her life.

Thankfully, Cotillard is fully engaged with her character and is easily the most appealing aspect of the movie. Beauséjour is something of a badass when she’s first introduced. She looks stunning in formal party attire, but her appearance belies a sly, cunning nature that is acutely aware of human tendencies to observe and gossip. She’s also ruthless as a spy, noting that her success and ability to stay alive during her various missions comes from being able to sell the emotions of whatever role she’s playing. No one questions her identity and legitimacy, nor her ability to carry out the mission she’s assigned.

Beauséjour takes on something of a mentor role when the story begins with her and Vatan teaming up in French Morocco. She comes off as the consummate pro, who knows every corner where a Nazi adversary might hide and has considered virtually every potential threat to blowing their cover. She has fully embraced her role as the wife of a businessman whose husband runs a phosphate company and eagerly awaits his return. Their story has to be convincing, and Beauséjour has thought of every narrative, every performance that they must make as a couple in front of neighbors, friends and Nazi soldiers. The character is so intriguing that it often feels as if the film should have been entirely about her and the various missions we hear about, one of which went horribly wrong. That makes it all the more frustrating when Beauséjour is essentially put on the sideline during the film’s third act while Vatan’s story plays out.

Allied attempts to make us believe that the most intriguing aspect of Beauséjour’s character is her loyalty to the resistance against Germany, along with her devotion to her husband. When those loyalties are questioned later in the film, it’s a devastating revelation. That’s probably the one scene where Pitt actually shines, because his character is suddenly filled with uncertainty and rage. Has his marriage been a ruse the whole time? Was this perhaps the best example yet of Beauséjour keeping the emotions real in order to believably accomplish her objective? Or has there been a terrible mistake made by allied intelligence with intercepting and interpreting Nazi communications?

With the film taking place in French Morocco, the same setting as the classic film Casablanca, and Zemeckis clearly intends to invoke that iconic film with the scenery, period costume and set design, and his two extremely appealing stars. As a director, Zemeckis is a visual master, constantly pushing boundaries with digital effects. Several scenes in Allied look great, especially the early sequences in Morocco that recall films of a past era. The very first scene during which Vatan parachutes into the desert also serves to pull viewers into the movie. Yet by invoking Casablanca, the movie essentially compels viewers to think of a far better, more memorable film.

Yet there are also a few points where Zemeckis lets his affinity for digital wizardry take over at the expense of the film. Later in the story, a scene during which a house full of partygoers observe an aerial battle between allied and German soldiers seems strangely out of place. The actors are clearly looking up at a green screen with the scenery created in post-production, and it almost feels like a fantasy sequence. Are those people really there? Perhaps the point is to establish the dichotomy between a seemingly happy domestic existence and friends celebrating with one another while a brutal war continues to be fought miles away and in the skies above. Yet the scene feels strangely detached, even when it eventually results in what’s supposed to be a climactic moment.

Zemeckis had an opportunity to make the rare prestige drama that also doubles as an action film. Yet those scenes never pop as they might in the hands of a more capable storyteller. Again, he’s an amazing visual stylist. But during what should arguably one of the most engaging scenes of the film, the attempted assassination of a German ambassador, the gunplay and car chases feel standard, as if Zemeckis is simply trying to convey the necessary information to move the story along. Watching Pitt with a rifle gunning down Nazi soldiers will remind many viewers of Inglourious Basterds, in which the action was frightening and visceral. Once you’re reminded of that, you might feel compelled to go watch that movie instead.

That’s the biggest problem with Allied. It makes you think of better movies instead of joining them on that pedestal.