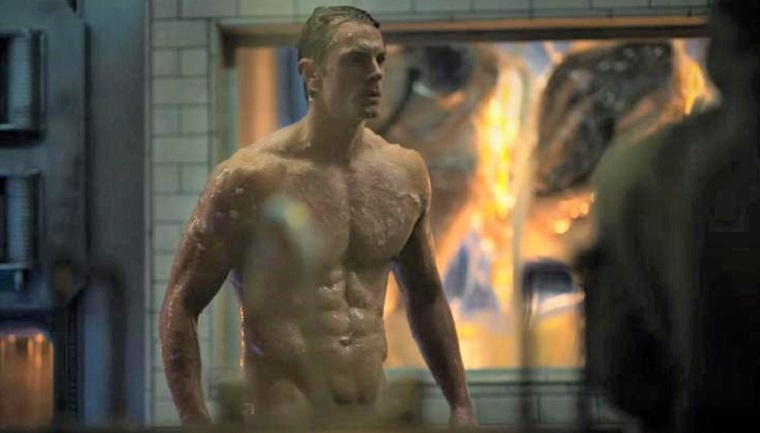 You can imagine that the people behind Netflix’s Altered Carbon were mighty bummed out when Blade Runner 2049 crashed and burned in movie theaters last year. Not only does their show take that franchise’s entire aesthetic, but also ramps up everything about it by about 1,000 percent. The techno-dystopian landscape. The rise of android-like tech and body modification. Musings on eternal life. A hard-boiled detective story at the center of it all. And a whole lot of violence.

One thing it takes to extremes that isn’t to be found all that often in Blade Runner? Nudity. And boy, do they ever. The show gives us naked people imagery so often and so in-your-face that it actually starts to get noticeable if 15 minutes go by and you don’t see someone’s bare ass.

It’s not just a bunch of extras writhing around in the buff, either. Three of the co-leads (James Purefoy, Martha Higareda, and Kristin Lehman) all go Full Monty at one point or another. As for show star Joel Kinnaman, if you were told after watching Altered Carbon that you would be required to draw his chiseled butt from memory, you could probably do a pretty decent job of it.

In most of those cases, the nude scenes are the kind you’d expect. Lovingly framed, meant to showcase the raw sexuality of the character, or perhaps the matter-of-fact nature of the world they live in. In other instances, however, the show presents nudity like it’s a weapon. In a world where the human body has become a commodity, the dehumanization of those bodies is often represented in scenes where naked characters are presented in extremely unflattering or unsexy ways. In those cases, we’re not meant to gaze or long for what we’re seeing. We’re meant to be repulsed by it. Or at least understand that this isn’t meant to titillate.

A scantilly clad prostitute is bloodied and beaten. Lifeless nude bodies are paraded like sacks of meat. A collection of fully naked women participate in a sword fight, full of blood, lost limbs, and complete carnage.

The nudity on display in Altered Carbon can feel, at times, essential to the themes of the story. Other times — perhaps most of the time — it feels gratuitious at best and eye-rollingly immature at worst. Certain scenes — especially those where random women writhe in the nude or the camera lingers on Higareda’s fully naked frame — call to mind the infamous Saturday Night Live sketch about Adam Friedberg, a 13-year-old boy who ensures that “there are lots of boobs in” Game of Thrones.

Game of Thrones is a show often criticized in early seasons for its use of gratuitous nudity and “sexposition.” While appreciated by a large sect of the audience, it was usually assumed that because the show is on HBO and can get away with pushing the boundaries on sexual content, they did so in search of boosting ratings. Eventually, the show toned down the sexual content, perhaps in part because of one too many rape and sexual assault scenes that made audiences wonder why they needed to keep seeing that kind of imagery.

Westworld is another HBO show that seems to weaponize nudity and sex and is perhaps the logical precursor to the story that Altered Carbon is telling. In Westworld, “hosts” have been created to look and act like humans, but are constantly being dehumanized by the theme park’s guests and staff. Graphic depictions of rape as well as mundane nudity are both used to drive home just how unsexual this makes the sight of a naked Thandie Newton or Evan Rachel Wood in this context.

Altered Carbon is telling a similar story in that regard. In an interview with GameSpot, showrunner, writer, and executive producer Laeta Kalogridis defended the overabundance of nakedness by saying that human bodies in the show have been devalued and, therefore, so has sex.

“Our worst instincts as human beings have to do with our carelessness with natural resources, and when the body itself becomes just one more of those resources, how will we treat it? Will we treat it with such indifference and with such depersonalization that it becomes more like a very fancy car than a repository of the self?” Kalogridis continued. “And that, I think, is one reason that the nudity itself is not gratuitous; it’s meant to reinforce to you, as a viewer, that the advent of this technology fundamentally and substantially changes people’s relationships with their idea of their own body.”

That’s a valid point and certainly a theme worth exploring. In a world where virtual reality and other technologies are transforming the human experience around sex and how we value our literal bodies, it’s interesting to ponder what it could mean for you to become a consciousness separate from one specific form and what that does to how you see physical sexuality.

There’s also something to be said for having TV shows that shove nudity and sex in our faces. America has a hard time coming to grips with its Puritanical roots and how that still informs the way we see sexuality. Having forms of entertainment that can challenge the idea that a naked body equals pornography is a good thing. If the nudity in Altered Carbon makes you uncomfortable, maybe that’s good no matter the intentions.

However, we also have to admit that at the end of the day, this is a TV show. It was made by people who want to make money (Netflix) and exists on a streaming platform that allows them not to adhere to any kind of family-friendly regulations. Therefore, it would be silly to deny that part of the reason there is so much nudity in Altered Carbon is to be titilating and sexy.

The show certainly wants to say something with the way it weaponizes sex and nudity, but it also wants to use time-tested methods for getting people all hot, bothered, and interested in watching the show. Almost every female lead in the show has at least one scene where they are naked, and we mean the full frontal kind. You can say there’s a message behind that, but the way the camera pans says otherwise.

And that’s fine. There’s nothing wrong with some good, old-fashioned shots of some good, old-fashioned attractive people being good, old-fashioned naked. It’s just that if you’re going to paint a TV show’s abundant use of nudity to drive home narratives around “depersonalization” and “technology,” you also have to admit that some of that nudity is simply there because you knew the bosses would be happy if you showed off some breasts and butts. You can have your cake and eat it too, but don’t try to tell us that you’re making a prestige TV show chock full of naked bodies and part of that isn’t about the fact that you can and your bosses want you to.

In a way, denying that your gratuitous nudity is gratuitious gives Altered Carbon a meta-level that it didn’t even know it was working on. Kalogridis says it’s about how this modern technology dehumanizes the human body so that it becomes a commodity, and TV shows like Altered Carbon are themselves commodities for large corporations who count on things like nudity in order to drive viewership. So the show is living the very theme it’s trying to explain to you is so bad, at least on some level.

As Julie Muncy at io9 said, “the problem is that two value systems need to be dealt with here: the value system of the people in the world of Altered Carbon, and the values of the viewers looking in on it.” Try as you might to separate the two, you can’t. Ultimately, the delivery system for commentary is itself a commentary because of how it’s received.