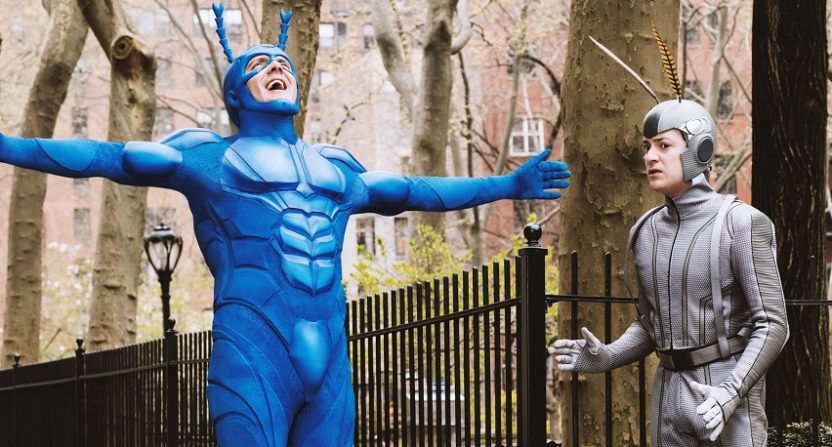 Amazon’s reboot of The Tick probably comes at an even better time than the first live-action attempt at bringing Ben Edlund’s doofus superhero satire to life.

When Fox’s version of The Tick, starring Patrick Warburton, superhero movies had only begun to penetrate the culture. The parody of comic book tropes, poking fun at what these costumed heroes do in their spare time, and iconic figures like Batman and Wonder Woman, was ahead of its time. People were still accepting comic book superhero standards. they weren’t quite ready to make fun of them.

Superhero movies and TV have engulfed the culture 15 years later, putting masked heroes with various superpowers on virtually every screen we can watch. That’s a far better environment for satire to succeed. After all, if you have to explain the joke — which Edlund thankfully never tried to — it’s not going to be funny.

Yet what might be most surprising about this new version of The Tick is that it’s not always funny — and that’s not a bad thing, because it’s not always trying to be funny. There is a tragicomic element to this series that spreads an underlying layer of sadness to the narrative. That’s not to say that the first six episodes which Amazon made available in a somewhat strange release schedule are a bummer. Far from it. This is still very much a comedy.

But maybe coming back to The Tick and superhero parody after so many years made Edlund more interested in exploring the inherently sad nature of superheroes and the mission they’ve undertaken. Look at virtually any superhero movie and TV series. These characters have had to give something up. Living a normal life is next to impossible. That especially applies to grim heroes like Batman and Daredevil. But it’s also the case for Spider-Man, Superman, Luke Cage, Oliver Queen, The Flash, Captain America and so many others. Hell, Wonder Woman gave up paradise to try and save mankind from itself.

One key difference in this rebooted series is a focus on Arthur (Griffin Newman), the meek superhero wannabe who has previously been portrayed as The Tick’s sidekick and rather unsuited to take on supervillains and fight crime. In the animated and previous live-action version of the show, Arthur just wanted to be a superhero and presumably made a moth outfit for himself (so many superheroes are inspired by bugs) that many often mistake for a bunny costume. Who would want to settle for being an accountant and live a supposedly normal life, even if it meant playing sidekick to a super-powered imbecile like The Tick?

This time around, the story is essentially built around Arthur’s origin story. He has an obsession with superheroes — or more specifically, supervillains — having lost his father during a battle that ended up taking five of the world’s greatest superheroes. The villain who extinguished those heroes, and taunted Arthur just as he lost his father, is The Terror, an amalgam of every big bad guy like Lex Luthor, The Joker and Magneto played by an unrecognizable Jackie Earle Haley.

(Maybe I just wasn’t paying close enough attention. Haley’s name is in the opening credits, and you could figure out which role he plays by process of elimination. But it didn’t occur to me until it became completely obvious. Maybe I was channeling The Tick as I was watching his adventures.)

The world believes that The Terror is dead, having been annihilated in a battle with Superian (guess which superhero he’s satirizing). There are frequent mentions of his teeth being found in the walls of a crater where the climactic showdown took place. However, Arthur is convinced that The Terror is still alive, based on similar crimes he used to commit occurring around the world.

Finding him has become his life’s obsession. For one thing, it would uncover the villain who’s gone into hiding and have him brought to justice. But it would also prove that Arthur isn’t crazy. His family — particularly his sister, Dot (Valorie Curry) — thinks he’s delusional, likely traumatized by what happened to him so early in life. He’s on medication as a result, and Dot frequently checks in with him to make sure he’s all right.

While investigating a crime in progress that The Terror is surely behind, Arthur encounters the big, blue behemoth who is about to become a significant part of his life. The Tick’s first appearance and several subsequent scenes create the impression that this new superhero could be a figment of Arthur’s imagination. Is this another take on a story point that we’ve seen in The Leftovers, Mr. Robot, and the novel and movie which popularized characters seeing imaginary people, Fight Club? Fortunately — and I don’t believe it’s a spoiler to say this — the series only flirts with that notion to tease the viewer and doesn’t fully go in that direction.

During the shootout that ensues when The Tick breaks up whatever evil transaction is taking place — and inadvertently causes an explosion which destroys any hope of establishing a crime scene — he gets his hand on an experimental suit that was being transported. The Tick believes it’s a sign of destiny. Arthur wants to be a superhero, something he fiercely denies, and now here’s a high-tech suit that gives him the ability to fly, makes him bulletproof, and includes a wealth of other features that have yet to be discovered because the on-screen instructional viewed through the suit’s goggles is spoken in Ukrainian.

However, that suit also becomes the driving force of the narrative. It doesn’t belong to Arthur and the bad guys who originally had it want it back. (Is it supposed to go to The Terror? Stay tuned, true believers.) Someone else who wants it is anti-hero Overkill, a funny take on murderous vigilantes like The Punisher and Zack Snyder’s version of Batman. Arthur doesn’t want the suit because he doesn’t know how to use it, only learning about the suit’s operating system and moth wings that enable flight capabilities accidentally. He also doesn’t want the suit because if he uses it, he essentially becomes a superhero and the normal life that he’s tried so hard to build and maintain will fall apart.

Naturally, this seems absurd to The Tick. Why wouldn’t Arthur want to be a superhero, especially when fate has seemingly dropped the opportunity in his lap?

But there may be a story behind The Tick’s cluelessness too. Something has happened to him that’s left him with no memory of whatever life he may lived or how exactly he came to be a superhero who dresses like a giant, blue bug. The Tick doesn’t seem particularly interested in learning what happened to him or where he came from. His purpose is clear and that’s all that matters to him. He’s come to The City to kick bad guy butt and protect those in greatest need of it. Yet even the hint of a backstory for The Tick is something that the previous animated and live-action series never touched on. Whatever made him a superhero and brought him to The City didn’t matter and the lack of any solid answers there was a joke in itself.

Longtime fans of The Tick will surely wonder if Peter Serafinowicz (Guardians of the Galaxy) can fill the big blue boots previously occupied by Patrick Warburton in the Fox series. That was a role Warburton seemed born to play, taking advantage of his imposing, square-jawed physicality and the general perception that he’s a dimwit. On first impression, Serafinowicz might seem miscast. But he’s certainly big enough to convey The Tick’s large presence, while also bringing a greater sense of morality and justice to his portrayal. Think of him as a less intelligent version of Adam West’s Batman. He knows enough to look both ways before crossing the street and will tell anyone to mind their obligation to follow the law. But he’s hopeless when it comes to finding a supervillain or trying to figure out his or her scheme.

The biggest complaint that comes to mind about The Tick is Amazon’s curious decision to only release the first six episodes, with the subsequent six to come sometime in 2018. Edlund and his writers are self-aware enough to make fun of leaving viewers with a cliffhanger, implying that maybe this was the decision all along. (Of course, it could have been added later once Amazon decided to split this first season.) With each episode only a half-hour long, it’s easy to breezily binge through what’s available and leave you wanting more. It also may compel you to watch the previous Tick series, which is also available on Amazon, and compare it to this reboot. This one is better, though.