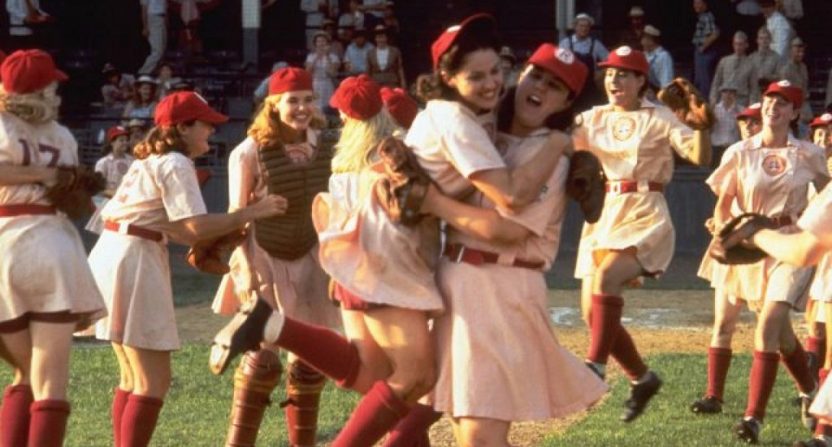 A reboot of the 1992 film A League of their Own is in the works at Amazon, according to The Hollywood Reporter.

The report does clarify that this would be “less as a traditional reboot and more as a modern look at the story” that the movie was based on, which was the real-life All-American Girls Professional Baseball League (AAGPBL) that was formed in 1943 when World War II threatened to shut down Major League Baseball. The film was directed by Penny Marshall, and featured a star-studded cast including Tom Hanks (fictional manager Jimmy Dugan), Geena Davis, Madonna, and Rosie O’Donnell.

The Amazon series is set to be a half-hour comedy that will be co-written by Will Graham and Abbi Jacobson. The Hollywood Reporter has been told that Amazon reached out to Penny Marshall and Geena Davis to get the go-ahead on the series, which will be produced by by Sony Pictures Television Studios.

The series — like the film — will focus on the Rockford Peaches, but will not feature the film’s main characters Dottie (Geena Davis) or Kit (Lori Petty).

Here’s Amazon’s official summary of the series (according to The Hollywood Reporter):

“A League of Their Own is a half-hour comedy infusing the warmth, humor and DNA of the classic film, while taking a contemporary spin on the stories of the women surrounding the All-American Girls Professional Baseball League. The show will begin with the formation of the league in 1943 and follows the Rockford Peaches, season to season as they struggle to keep the team alive through close games, injuries, late night bar crawls, sexual awakenings, not crying and road trips across a rapidly changing United States. The series dives deeper into the issues facing the country while following a ragtag team of women figuring themselves out while fighting to realize their dreams of playing professional baseball.”