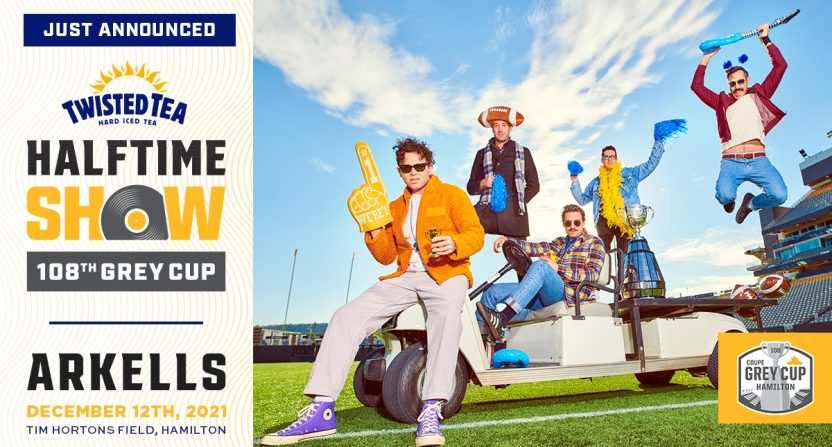 Sunday’s 108th Grey Cup in Hamilton (6 p.m. Eastern, TSN/ESPN2), the first one held in that city since 1996, will feature a local band in the halftime spotlight. Arkells, formed in Hamilton in 2006, have won plenty of national (including the 2021 Juno Award for Group of the Year) and international (including platinum status for the High Noon album and for singles Leather Jacket and Knocking At The Door) recognition, and now they’re playing the Twisted Tea Halftime Show at the biggest annual sporting event in Canada. But this is just part of their long history with the CFL, which includes playing pre-game at the 2011 Grey Cup, playing at the 2012 Grey Cup train launch, teaming with the Tiger-Cats for “Ticats Are Hummin‘” in 2012, and even working with the league to rearrange a kickoff time in 2019 so fans could see a game and a concert. Arkells’ bassist Nick Dika (seen at right in mid-air above) spoke to The Comeback this week via email about their CFL history and what they’re excited about ahead of Sunday, and said the CFL fits well with the band’s philosophy of creating fun, engaging shows.

“Whenever the band performs we want to put on the kind of show where everyone shares and participates in it– we never want it to just be about the band up there banging away onstage,” Dika said. “It’s why we love sing a-longs and dancing at our shows. When we’ve partnered with the CFL it’s because they share that similar mission about creating a fun, upbeat community-based atmosphere at their games and events.”

Dika said it’s especially fun for to get the chance to play the Grey Cup halftime, as he and lead singer Max Kernan in particular have a long history of watching the game and the halftime together.

“I remember watching the Grey Cup and the halftime show every year in college with Max. Our friend Chris would host a benefit and we would watch it at a bar with all his friends and family. Nickelback (pyro, pyro, pyro) [in 2011] and Alessia Cara [in 2018] were two of my more recent faves.”

Sunday’s show will also feature The Lumineers and K.Flay (who Arkells collaborated with on recent single “You Can Get It”). Dika said they’re excited about playing with those guests, and this is a neat chance to reconnect with them, something that’s been difficult with the COVID-19 pandemic’s impacts on touring.

“A lot of our favourite halftime shows had special guests and we wanted to continue the tradition. It’s always an honor to share the stage with musicians and performers as talented and accomplished as The Lumineers and K.Flay. It’s another opportunity to learn from pros doing their thing up close. And given that we have toured far less than we normally would, it’s a great chance to get to see friends that we normally cross paths with much more frequently.”

This is just the latest sports connection for Arkells, as they’ve been featured on five EA Sports NHL series soundtracks and countless sports montages and bumper music bits (both in Canada and in the U.S., where CBS and NBC NFL coverage in particular has featured them). Dika’s a notable sports fan himself, and he has done some writing for FanGraphs. He said it’s a neat feeling to hear their music catching on in sports.

As for Sunday’s halftime performance, Dika said there will be plenty of cool visual flourishes involved.

“Because most of our performances aren’t normally for TV we’ve been able to experiment with some production things that we don’t normally get to – to hopefully connect with the TV audience. And we tried to get the CFL to give as much pyro as possible – we even said we’d skip dinner on game day so they could put just a bit more money into the pyro budget.”

Dika said this halftime show is an opportunity he didn’t expect to ever get, but that’s true with a lot of where the band is now.

“I definitely never thought this was something I’d be doing. Although, at this point in my life, I feel like a broken record saying it.

The Grey Cup broadcast will begin at 6 p.m. ET Sunday on TSN and ESPN2.