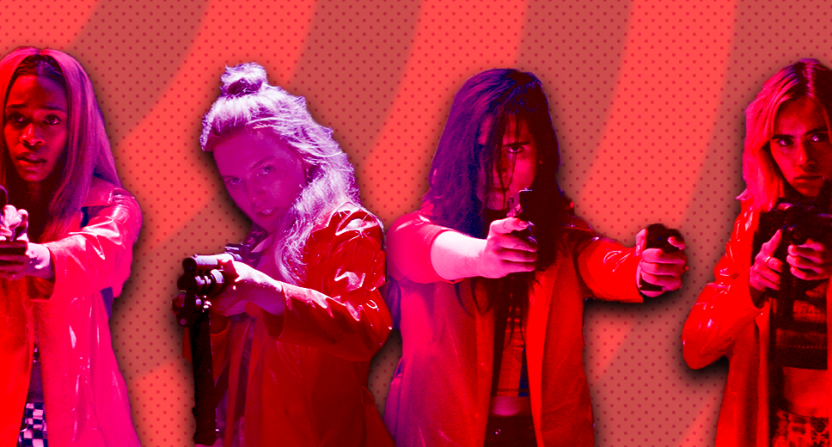 Making a non-formulaic movie in 2018 is a tough ask.  If it isn’t a reboot or a large movie property, it is tough to get your film in front of the masses. Assassination Nation is on its own plane right now. It is pulpy and has a lot of modern references that put it into this weird time capsule. Does that make it into a gimmicky movie, or a movie that is taking advantage of the current zeitgeist?

The film is supposedly based off of a true story. In reality, it is supposed to be a modern interpretation of the Salem witch trials, so the based off of a true story tag is a bit of a misnomer. Nonetheless, the story involves four young women that are all facing their own types of adversity as they go through high school. When a hacker releases photos of people in the town bit by bit, the girls then come into focus as the reason for the hack, and it makes for a very messy situation.

Naturally, as has become the norm for modern movies, social media comes into play. And not only does it come into play, but a lot of the norms around the apps are discussed, and it talks about the absurdity of it all. Not many teens are as self-reflective as the main characters of the film. It doesn’t matter though since the topics and discussions are pointed enough to leave a lasting effect. Instagram is talked about like a mausoleum of perfection and how it warps your own self-worth. As they ponder this, you’re given a landscape that looks like it is put through a million Instagram filters itself. It is a stunning and beautiful juxtaposition to what is being said on the screen.

Coming into a film with no expectations and realizing that you’re watching a well-constructed piece of work is an odd sensation. It is a testament to trailers and advertisements that you come in prepared to feel a way about a film. Teen names like Bella Thorne, Maude Apatow, Odessa Young, and Suki Waterhouse doesn’t exactly inspire confidence when looking at the cast, but the script doesn’t put any of them outside their collective comfort zone, and you find superficial people acting surprisingly genuine.

Director Sam Levinson helps ensure that everyone is put in a position to succeed, and even actors with bit parts like Joel McHale and Bill Skarsgard have roles that are fully fleshed out. And he also brings some flourishes; one of the more impressive scenes and one of the most distinct moments in the film is a home invasion that takes place, seen from outside the house. The feeling of being a bystander peeping tom is both horrifying and also gripping in a way that hasn’t been felt this year in film. You’ll catch yourself clenching your fist without even realizing it.

The metaphors and moments feel like reaches at times, but the film can also can be on the nose when it could beat around the bush a little more. The surprises aren’t necessarily surprising as they can be seen from a good bit of distance away. Depending on the demographic watching it, it will be a polarizing film. From that standpoint alone, it could be propelled to cult status.

But there’s enough here to make it worth checking out, and fun, inventive movies are within our grasp. It may just come in a package you don’t expect.