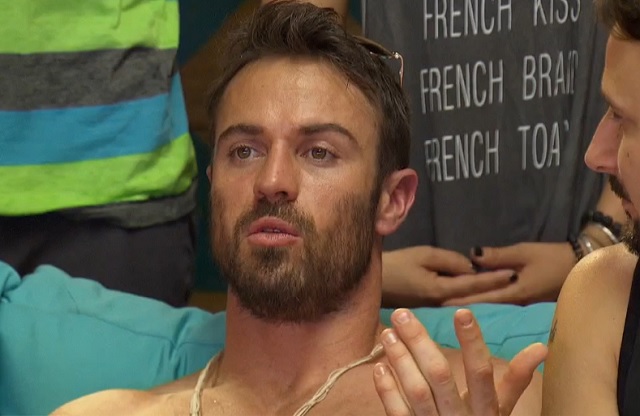 You know how The Bachelor and The Bachelorette both put on this elegant facade in order to mask the fact that they’re basically just giant shit shows?

This year, the third season of Bachelor in Paradise, things got off to a fast start. With that, let’s get right into this week’s Power Rankings.

It’d be easy to sit here and make fun of Chad, again. He certainly provided plenty of material, from his continued obsession with protein to him drunkenly pooping his pants.

He growled at sea animals, cursed out Lace and referred to Sarah, who has one arm, as a “one-armed bitch.”

So, yeah, it came as a surprise to no one when Chris Harrison gathered the group the next morning to inform them, and Chad, that Chad was being sent home after just one day in “paradise.”

Here’s my problem, though, and why I actually feel bad for Chad, even though he’s clearly an ass: Most Bachelor contestants use the show for their own benefit. Chad, on the other hand, is being used.

Every preview for Bachelor in Paradise focused around “the return of The Chad.” Every time Chris Harrison mentioned Paradise during the live episodes of the recently-completed Bachelorette, he’d make a joke at Chad’s expense. The entire first half of Tuesday night’s episode centered around Chad’s impending arrival.

Chad is ratings gold and because of that, Harrison and his crew seemingly couldn’t wait to bring him onto the island and drown him in alcohol so that he could be unleashed.

Chad’s not blameless here. Nor as his actions excusable. But the same thing should be said about Harrison and the show.

“Fuck you, Chris Harrison,” a visibly hurt and worried Chad yelled as he walked off.

That might have been one of the rare moments where Chad had a point.

Lace certainly came out strong. First she threw some smiles towards Grant and planted that seed. After that and about 30 shots, it was time to dry-hump Chad in the jacuzzi.

With Chad gone, Lace now holds the title of Most Combustable. She spent the majority of her time on The Bachelor drunk and seems to be heading down a similar path.

I can’t decide if I’m excited or scared to watch.

God, this guy is the worst.

Our favorite Canadian weirdo returns. Daniel kicked off the episode complaining that he wasn’t attracted to a single girl there.

“An eagle doesn’t settle for a pigeon,” he said. “It settles for an eagle.”

Later on, he made himself a wolf and said all the girls on the island were poodles. He must have visited a zoo the previous day.

Eventually, though, Daniel found his eagle:

Unfortunately for him, that eagle was sent home the next day.

“Last season’s Bachelor was my first time dating someone since having my kids and getting divorced,” Amanda told the cameras early on in the episode, as if that was something to be proud of and not worthy of shame. “Being sent home was tough, but I have no regrets.”

That sentence right there should be more than enough to get social services invovled.

“I feel so lucky to get a second chance at love,” Evan said to the cameras. Someone should tell him there are ways to find a life partner that don’t involve going on reality TV.

Anyway, Evan, shockingly, spent the majority of the episode talking about Chad, even though Chad opened up the episode apologizing to him.

Also, he now has a new red shirt.

The good news for Jared: he’s clearly in demand and got to go on the first date.

The bad news: based on the previews, we know that Ashley I. is on her way.

The good news for Jubilee: Jared accepted her date card. Also, because this is Paradise and not The Bachelor, the color of her skin no longer prevents her from finding love.

The bad news for Jubilee: I’m not sure she’s quite ready for the Paradise experience.

I do like how we’re not even pretending that Emily and Haley are two separate people. And I LOVE all the foreshadowing going on as they repeatedly mention how they don’t plan on going for the same guy in Paradise.

My money’s on Daniel.

“Sure, she seems kind of crazy, but she’s hot,” Grant said of Lace. Finally, one guy with his priorities straight.

Nick has already been on The Bachelorette twice. Why he’d put himself through this nonsense again, I have no idea.

“I’m coming to Paradise because I’m curious and hopeful to see what it will bring,” he said to the cameras. I’m guessing herpes.

I have no idea who this person is…

…but she seems to have gotten off to a fast start, as her and Vinny are already locked up.

My question, though: will his mother still be proud after watching him drink and make out on TV?

Vinny's mom is all of our moms IRL
"He's still siiiingle"@BacheloretteABC #TheBachelorette pic.twitter.com/98A4FXxaL2

“I don’t give up on anything,” she said, explaining why she’s back on Paradise.

It might be a good idea to make an exception for everything Bachelor-related.

The lone victim of the night. You know you were truly wronged when you get an apology from Chad.

I should've never ever EVER said that abt @sarahherron tonight. I was a dic k im disappointed in myself pic.twitter.com/6hV2suBHRY

Lines of the Night

“At least all those people were rich.”— Chad, on Adolf Hitler and Benito Mussolini