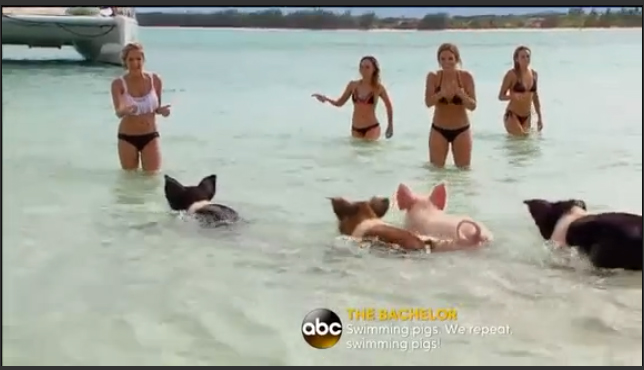 So much to cover, where should we begin? Week 6 of the Bachelor served as a strong punctuation for the first half of the season. A climax, if you will. There was lots of build up, even more action — crying, backstabbing, pigs running — and some shocking revelations right before the curtain fell on Act I. We now enter Act II of this glorious opera. And shit’s about to get real.

This week’s episode picked up right where last week’s left off: with a flustered Ben pulling Olivia aside to discuss the accusations being lobbed at her by all the narcs in the house. Olivia, though, is no amateur. She knows how to play the game and responded with a strong and brilliant counter.

“I got the first group date rose from you,” she said to Ben. “After that I had a target on my back.”

You see that, that’s someone who’s been studying the Bachelor playbook. Instead of stooping to the level of the rest of the girls in front of Ben she flipped the script. I’m not the problem, they’re all just jealous of my awesomeness. A genius move from a strong talent who could step right into any Bachelor Paradise season and steal the show. Things might not have worked out for Olivia this year – more on that below – but if you look at this season as audition, well, suffice to say she passed.

After that quick Ben and Olivia heart-to-heart, it was time for the rose ceremony. There, Ben said goodbye to Jennifer, who might have said 12 words all season. That narrowed the field down to 10, all of whom joined Ben in the Bahamas.

The episode featured three dates: a one-on-one with Caila, a grouper with Amanda, Becca, JoJo, Lauren B, Leah and Lauren H, and then a two-on-one (!!!) with Olivia and Emily.

The one-on-one with Caila was essentially the same date Ben’s gone on with every girl this season: a day trip — only this one was on a boat instead of a plane — and a dinner that felt and sounded like a job interview. The one difference: we learned that Ben has a strange tattoo under his left shoulder. And that he likes wearing jean shorts.

The group date, though, was anything but conventional. Someone somewhere thought it’d be fun to have the ladies feed pigs. In the ocean. In bikinis, of course. It went about as well as you would imagine.

But the fun didn’t last. Shocking as it may be, some of the girls find the process of sharing one man emotionally draining. Ben, of course, can’t understand why being on the show might be a tough situation for someone and why the ladies don’t all just want to swim and enjoy the day. After all, what girl wouldn’t leap at the opportunity to date him, even if it means dating him at the same time as five other girls? No, he didn’t say this explicitly, but, well, he might as well have.

The one struggling most with the situation was Leah. She had yet to go on a one-on-one and this week got passed over, again. That was the last straw. After that the claws came out and they were sunk them into the cream-colored skin of Lauren B. Why Leah chose Lauren B Leah is unclear. But this is, essentially, how her smear-job went down later that night.

Leah: I don’t like to say names, but I think the person in the house who you have the strongest connection with is a bitch.

Leah: Fine, you twisted my arm. I’m talking about Lauren B.

Ben, being the slab of wood that he is, thought telling Lauren B. that someone in the house was going after her was the way to go. Dude might be the biggest drama queen of the group. Lauren B. later confronted Leah, who responded with a denial worth an Oscar-nomination.

Leah really perfected the "I am guilty" reaction for this one…@BachelorABC #TheBachelor pic.twitter.com/VNQOcDMnyA

Planting some doubt in Ben was a smart step. Showing up at his room later that night to pile on Lauren B even more, not so much. Ben might love gossip, but even he has his limits. “I feel like we’re just talking about Lauren B,” he said to the camera. A few minutes later a teary Leah was making her way to the door.

And with that it was time for the main event, Emily vs. Olivia, winner stays on, loser goes home. The loser, it turned out, was Olivia, which means the girls in the house are now going to have to set their targets on someone else.

In total four girls were sent home in this episode, while six remain. Below are the power rankings for the remaining ladies, (with last week’s ranking in parenthesis). 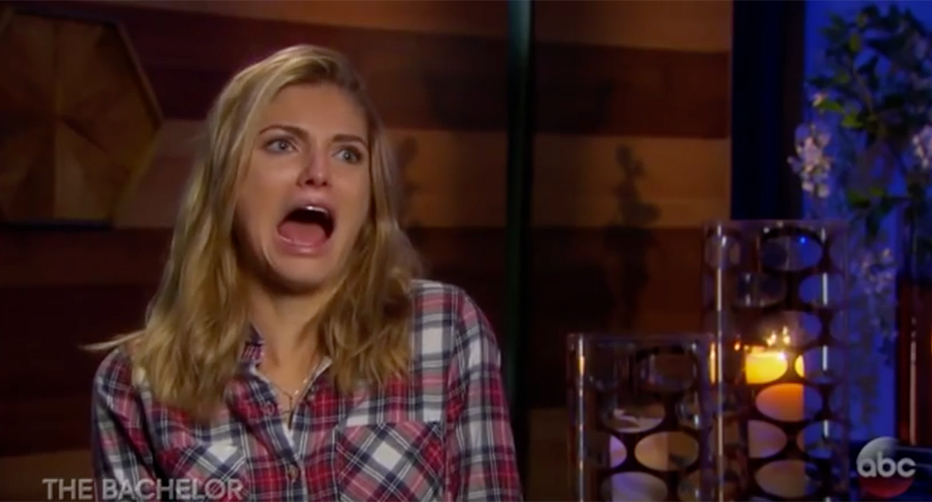 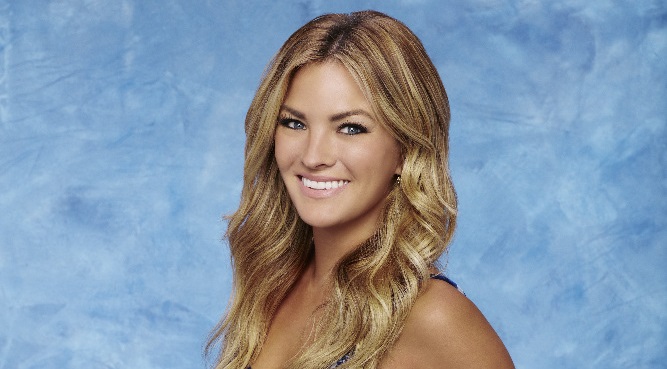 1. Becca (2): First off, we know Ben likes the way she looks. After all, she’s skinny and blonde. That she only spent about two minutes talking to Ben this week is of no consequence. She got some quality makeout time in during the group date and is the only lady left without a glaring weakness, assuming Higgins is cool with the virginity thing and all.

2. Lauren B. (2): She was the first one Ben pulled aside during the pig date. Then she found herself in Leah’s crosshairs. Laruen B’s still in great shape. But her prospects aren’t quite as high as they were last week.

3. Caila (3): Well that was a strange evening. The good: Caila was the first gal to get invited to a second one-on-one date. She refused to narc out any her housemates, even though Ben, being the catty 12-year-old that he is, essentially begged her to. Then again he seemed to be focused on other areas while speaking to Caila.

Ben lookin like he should take a sip of that water cuz he's #thirsty! #TheBachelor pic.twitter.com/bf4riKnAn9

Also, Caila told Ben that she’s falling in love with him. Well, kind of. That’s actually where things got weird. It started, of course, with Ben putting Caila on the couch during the nighttime portion of their one-on-one. His issue, if I understood it clearly: she’s too happy and smiley and it bothers him. Normally that’s where the girl caves and opens up and reveals her deepest and darkest secret – her brothers’ dog died 12 years ago and since then she’s been holding herself back emotionally, for example – to Ben and then thanks him for helping her get over it.

Not Caila, though. “I feel a little put on the spot to cry on your shoulder,” she responded. Then she rambled on about loving him but not being sure she could love him but feeling like she did but yet not quite feeling it. I don’t know, it was hard to follow. Ben looked confused. I know I sure was. It was time for a commercial. It felt like I was watching an episode of General Hospital. It seemed like Caila might be heading home.

When we returned from the break it was if if the little voice inside Caila’s head perked up and scolded her for possibly throwing her reality TV career away. She quickly changed her tune and put a more positive spin on things. It was actually an impressive display.

Where this leaves our resident sex panther going forward is unclear. But for now Cailia appears to still be in good standing. 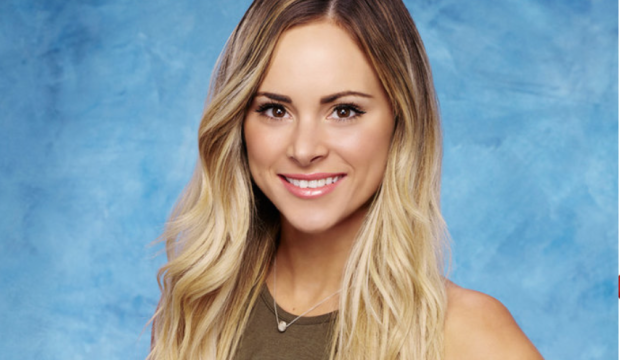 4. Amanda (4): Amanda was mostly relegated to the background during this action-packed episode, though she did manage to nab the group date rose. She’s got everything going for her. Except the two kids part. Amanda might have forgottenabout her children – when was the last time they were mentioned? — but you can be sure Ben hasn’t.

5. JoJo (6): Got in the first hug while greeting Ben before the group date, which is always a good sign. It shows determination and athleticism, two important traits for any wife. But, with the field now down to six, she’s going to have step up her game if she wants to stick around.

6. Emily (7): “I don’t want him to think I’m dramatic and causing problems,” she said. You know what might solve that issue? Not being dramatic and causing problems! And yet, somehow Emily was able to pull off the upset and take out Olivia. That she endeared herself to Ben by stabbing her sister in the back – “you’ve really been at a new level since Haley left,” Ben said at one point – doesn’t exactly portray her, or Higgins well. But that’s neither here nor there. All that matters is that Emily is still around.

Of course the odds of this 23-year-old Vegas girl who lists her profession as “Twin” still being around two weeks from now aren’t very good.

1. “I like reading books and thinking. I want to talk smart things.” — Olivia.

Consider this the Bachelor version of Omar Little’s famous, “You come at the king you best not miss.” Only thing is: Emily didn’t.

Damn you, Higgins! First you chase Lace away. Now you take Olivia away from us, have you no decency?