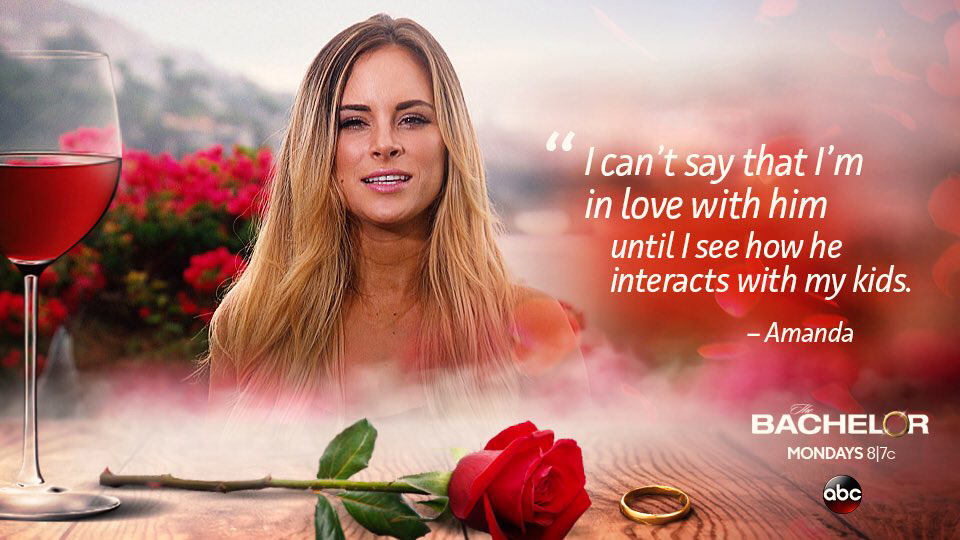 Four ladies, four trips to their respective homes. What could go wrong, right?

The first hour-and-a-half of Hometown Week was relatively quiet. Ben visited Amanda in Laguna Beach and morphed into Super Dad. He visited a whiskey library with Lauren B. in Portland, Oregon. He made a toy house with Caila somewhere in Ohio. About 217 bottles of wine were uncorked.

And then there the was the trip to Dallas to meet JoJo’s family, a fireworks filled visit which rewarded us loyal Bachelor viewers for hanging around despite all the snooze-inducing scenes early on.

This Rose Ceremony is going to be tough! #TheBachelor pic.twitter.com/0CPNOyqpsS

We’re down to the home stretch now. Just three ladies left, and Fantasy Suite week is around the corner. So where do our remaining gals stand, and what went wrong for Amanda? Below are our updated power rankings, with last week’s ranking in parenthesis.

Amanda (4): On the one hand you couldn’t help but feel for Amanda and her kids and how hard this whole situation must be for all involved. On the other hand, I’m still not so sure that the best way for a single 25-year-old mother of two to find her children a new father is by entering a reality TV contest that will keep her away from her kids for months. But hey, what do I know?

The date started with a little gathering on the beach. Ben and Amanda hugged, Amanda got to touch and play with her kids. The whole thing had a real prison visit sort of vibe. Amanda also felt comfortable declaring Ben a man suitable of being a father figure for her children after seeing him interact with them for maybe, oh, 45 minutes? But again, what do I know?

All of the feels here. Too cute. @BachelorABC #TheBachelor pic.twitter.com/TVGdy3IrRg

After that it was time to pack the little ones into the car and make the short drive over to Amanda’s Laguna Beach home where Ben could meet her sister and parents. He had a heart-to-heart with her father while Amanda debriefed her mom, who appeared to be very puzzled by the whole situation.

“He’s a great guy, I’d be very happy to see you with him,” she said at one moment. It sounded as enthusiastic as it reads.

But in the end Amanda never really had a shot. Ben could run around in the sand with the kids, and say all the right things, and put on a good face, but there was just no way he was going to choose the mother of two. He’d never admit it, and that wasn’t the reason he gave for sending her home. But we all knew Amanda’s journey was going to come to an end sooner rather than later. She actually lasted longer than most experts thought. (Ed note: experts?) Now she’ll have to go back to spending her days actually being a mom and taking care of her kids. Poor woman.

1. Lauren B (1): At this point it’s her game to lose. She heard her name called first during the Rose Ceremony — always a good sign. An even better sign: when the Bachelor breaks down while trying to describe why exactly it is that he likes you.

Either these feelings are legit, or Higgins has been taking classes from Daniel Day Lewis. I’m going to guess the former, though I guess you can never be one hundred percent sure.

As for the pre-meet-the-parents portion of their date, they seemingly spent it eating every fatty and carby food Portland’s food trucks have to offer. It was the first time all season we saw Ben put food in his mouth. He and Lauren B also shared a run-of-the-mill heart-to-heart. Lauren B. admitted that she was still scared of this process. Higgins threw his Freud cap back on and responded with a “what scares you?” Things pretty much went as expected.

Later on the two made their way over to Lauren B.’s house. There we met Lauren’s seemingly thirsty sister who was WAY too prepared to be on TV and who I think we can expect to see on future seasons of the Bachelor. We also met Lauren B’s parents and younger brothers. To be honest, I don’t remember a single thing about her parents or the evening other than everyone making sure to carry a glass of wine wherever they went. That, and the Line of the Night (see below) delivered by her younger brothers post-credits.

First I want to rewind the tape and try to unpack what exactly was going on with JoJo’s ex-boyfriend, Chad. A quick refresher: a vase of roses and a handwritten note greeted JoJo as she approached a house which we assume is where she lives. She giddily picked them up, opened the letter and began to read it. She assumed it was from Ben — until she got a few sentences in and realized that it was apparently from some dude she used to date named Chad. This confused her.

"The only way this is going to work, or not work, is if I allow myself to feel." – JoJo #TheBachelor

After that it was time to visit the rest of the JoJos, who, judging from the size of the family’s house, are quite rich. The matriarch of the family is also a golden character, one who could star in her own reality series. Any rich woman who forsakes wine glasses should.

She also seemed baffled by the fact that there were other ladies competing with her daughter for Ben’s heart, which was kind of strange. While all this was going on JoJo’s brothers tossed Ben under the interrogation lights and accused him of sounding “coached up” with his answers. That critique was right on, and Ben didn’t exactly do a great job in alleviating their concerns. But their methods overall were certainly a bit, shall we say heavy-handed?

“How can you fall in love with someone on two dates?” one of them asked JoJo. It’s a fair question, though the fact that it came from the mouth of a man who just two years ago also went on a reality TV show to find love kind of invalidates it.

By the end of the night Ben managed to gain the blessing of JoJo’s father, though the brothers remained unimpressed. As for the mother, well…

3. Caila (3): She might be a bit of a fraud, but she did treat Ben to the coolest date we’ve seen all season — a trip to her family’s toy factory where Caila and Ben were able to literally build a toy house. Not put together, but actually build, in a factory, with tools and gear.

An Officer and a Ben?

The one strange part: Caila never name-dropped her dad’s business. This has nothing to do with Ben but it still worth pointing out. A major missed opportunity. (Ed note #2: Was it McDonalds? We know how you feel about McDonalds. Maybe she was just being safe because she knew you were watching.)

As for the second half of their date, Caila also has a big house. It seems like Ben, or the ABC producers, really know(s) how to pick ‘em. Her dad decided orange pants was the way to go while appearing for the first, and likely only time, on national TV. Caila’s mom, clearly unfamiliar with Ben’s whitebread background, asked him if he knew any Filipino people. That was funny. And then, after explaining, in intricate detail, the significance of all the food she had prepared, pulled him away before he could even enjoy a single bite.

Seriously. Will someone let @benhiggi just take ONE bite of his dinner? Come on!@BachelorABC #TheBachelor pic.twitter.com/3ZDG3oLwaN

The next 20 minutes was spent listening to Caila whine about whether or not she should tell Ben she loves him. Also, Ben used the phrase “our connection has been really cool” while trying to explain to Caila’s father what it is he likes in her daughter.

No one ever said love wasn't crazy.

In the end Caila didn’t tell Ben she loves him, in my opinion, not because she’s scared but rather because she doesn’t actually like him. She’s here for the spotlight, and is playing her cards well thus far. There have been a few slipups, a few moments where she let her guard down. But for the most part Caila has been on her game. Given that Ben views her as a Sex Panther, the Fantasy Suite could end up providing her a big boost.

Imagine if this was the advice a dad gave his son.

Any time you combine the words “Ben” and “brain” you lose me.

This was, I think, my favorite moment of the season. Did you see how flustered Ben was, how he tried reverting back to his standard talking points? It was like listening to Marcu Rubio fend off Chris Christie during a debate.