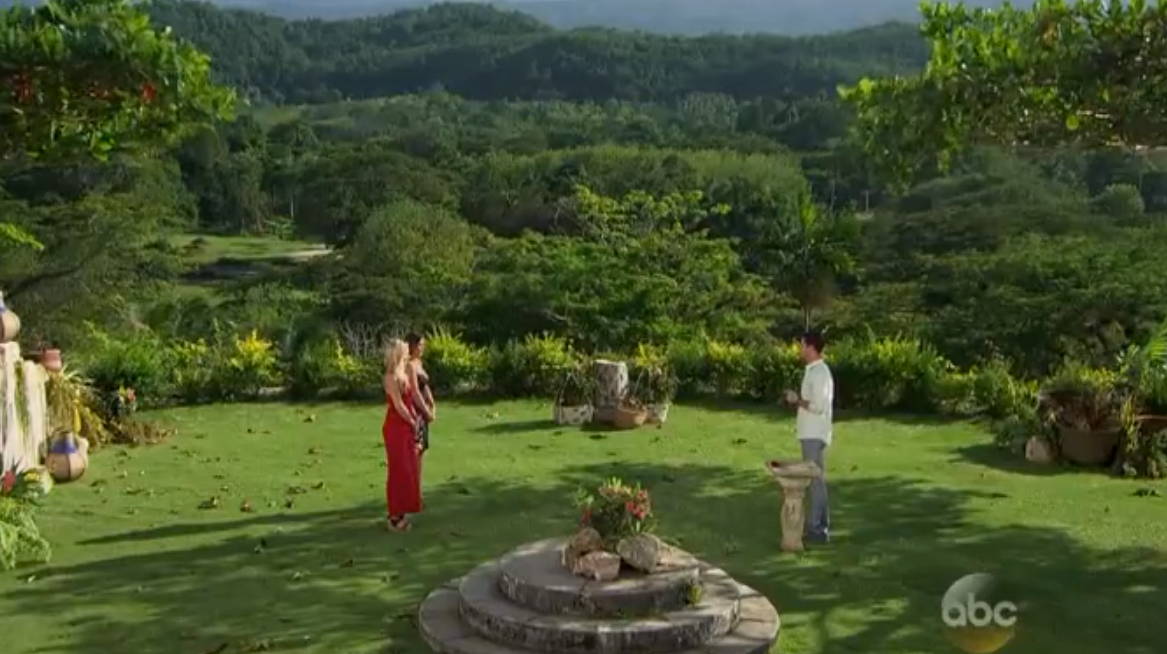 If you like watching make-out sessions, hearing couples confess their love for one another and seeing people in pensive poses then this week’s episode of The Bachelor was for you. The word “love” was muttered approximately 851 times. Three girls said it to Ben. He broke the unwritten Bachelor rules and said it back to two of them.

Oh, and he got to have lots and lots of sex.

The episode started with Ben welcoming us to Jamaica, the fifth location we’ve heard him label “paradise” this year. “It’s gorgeous, it’s open,” he added. Apparently he compliments girls and countries the same way.

Then it was time for the dates, each of which made it seem like the episode was running on a loop. Ben and Girl see each other and lock lips for a bit. Ben tells the camera he noticed Girl is being a bit cautious. Girl tells camera she loves Ben but is holding back. Ben asks Girl what’s wrong. Girl acknowledges she’s holding back. Ben says the last thing he wants is for Girl to hold back. Girl tells Ben he’s perfect. Girls tells camera she wants to tell Ben she loves him but can’t yet. Girl tells Ben she doesn’t want to be vulnerable. Ben answers with some armchair psychology gibberish. Girls tells Ben she loves him. Ben and Girl kiss. Ben and Girl go swimming.

When you decide to takes the plunge together! #TheBachelor pic.twitter.com/w2HF1gaT6b

Of course, this being The Bachelor, things were a bit more complicated than that. Though not by much. So, with that in mind, let’s dive into this week’s Power Rankings, with last week’s rankings in parenthesis. 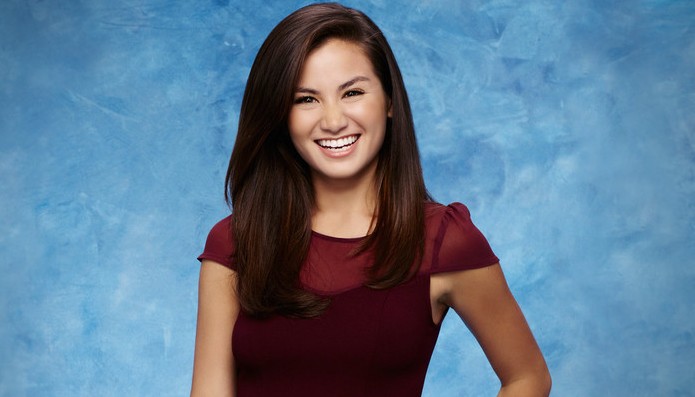 Caila (3): I have a feeling we’ll be seeing a lot more of Caila over the coming years; she’s making a strong push to get herself named the next “Bachelorette.” She’s got all the physical tools and is zany enough to make things interesting.

But that discussion is for a different time.

Caila and Ben’s date started with some kind of boat ride through a river in some jungle. Then they pulled over to talk and sip coconut juice out of actual coconuts. Caila was quiet for the first half hour – Ben described her as “melancholy,” and even used it in the proper context. Dude’s been hitting those books. He then astutely pointed out to the camera that something was clearly on Caila’s mind. Perhaps it could be the fact that she’s in this cracked-out reality TV show where her love life is observed by millions people and where she has to fight off 21 girls to get one guy to fall for her? But what I do know, maybe she had a rotten coconut or something.

Ben responded the way he normally does — he put her on the couch and under his faux microscope, got her to confess her love for him, then invited her to the fantasy suite. Suffice to say, Caila was down.

"Should you choose to forgo your individual rooms…" #TheBachelor pic.twitter.com/J37YxMeoax

Things were looking good for Caila, until we saw Ben say, “I love you” to Lauren B. first, and then JoJo. By that point it become obvious that Caila’s time was winding down, obvious that is to everyone except Caila. That’s when things got awkward.

The morning after his date with JoJo, Ben told us that he realized it was time to send Caila home. Clearly he wasn’t impressed with what he saw in the Fantasy Suite. At the same time the producers seemingly convinced Caila that going over to Ben’s place and surprising him would be a great idea. Man, those people know how to exploit emotions to get some great TV.

Ever wonder what it looks like when a guy’s not happy about a surprise?

A few minutes later Ben told Caila that it was time for her to go home. She cried. It was sad. Then she hit him with the million-dollar question:

Did he know he was dumping her before he, well, you know.

“No, I wouldn’t have gone through this week if I knew,” he answered.

Whatever you say, big guy.

One addendum: before we go feeling sorry for Caila, let’s remember that this is a woman who said in Week 1 that she fell in love with Higgins while watching him on last year’s Bachelorette and dumped her longtime boyfriend because of it. That’s to say: Caila ain’t exactly the sharpest tool in the shed, or she is the most calculated contestant on this show in history. One or the other. Or both. 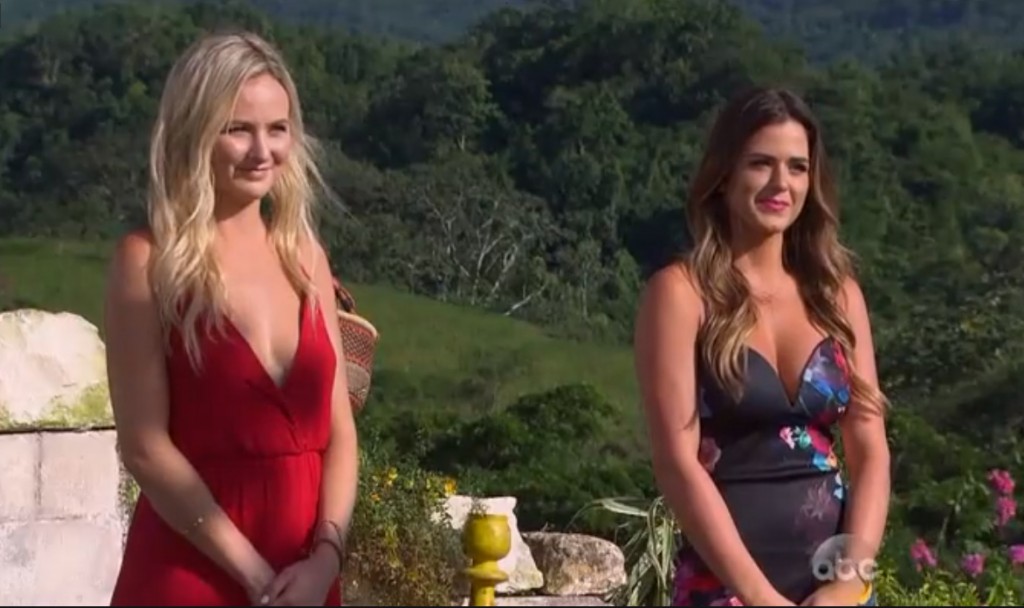 1. Lauren B (1): And then there were two. And never in Bachelor history have there been two so neck-and-neck.

But Lauren B. will always have the title of being the first woman this season to hear “I love you” from Ben. That magical moment occurred on a beach, just after a romantic first date of playing with baby sea turtles. So, for those keeping track, Caila got a boat ride, JoJo got a waterfall.

Lauren B got a school field trip.

After that there was some more opening up, some more discussing of vulnerabilities and love and fear and blah blah blah. You’ll be shocked to learn that Lauren B. was holding back a bit. Then she told Ben that she was completely in love with him and that he was the man of her dreams. He said…I love you back?! That’s not supposed to happen, but Higgins doesn’t have time for your stinkin’ rules, he’s here to find love. And have sex. Because nothing leads to more sex on The Bachelor then telling a girl you love them.

His plan worked to perfection.

“Last night, I was able to get confidence in her feelings and she was able to get confidence in my feelings,” Ben said to the camera the next morning. It would probably be easier if he just came out and said the sex was great. Either way, it was a strong start to the week for Higgins. Two nights, two girls, one more to go. But there was no time for a rub down or hot bath. The next morning it was time for Date No. 3.

2. JoJo (2):  She’s certainly got the whole run-into-his-arms thing down, that’s for sure. And she seems to carry around an infinite amount of bikinis. But you can’t make fun of JoJo. She managed to endear herself to Ben despite a wacky trip last week back to her hometown.

That trip, and specifically JoJo’s crazy-ass brothers, did spook Higgins, but not enough to keep him from extending JoJo an offer for the fantasy suite. Of course JoJo had to prove herself to Ben before that, which meant going on yet another helicopter ride with him, then going swimming with him, again— and then professing her love moments after telling the camera “it’s hard for me to say it.”

It’s like all these girls studied the same script.

That then led to one of the most adorable moments of the year: Ben saying “I love you” back, and JoJo reacting with shock.

Best. What? Ever. #TheBachelor https://t.co/MBLgZ9zzIM

Now let’s take a moment to process just how sick all this is. Here you have a woman telling a man she loves him, then hear those feelings reciprocated, only to react with shock because of how things usually go on this inane show. These people are all sick, and scenes like that are the very reason I don’t believe a single of the fluffy words that come out of Higgins’ mouth. This whole thing is crazy.

Retweet if this is one of the most awkward GIFs ever!

(Man, I can’t wait for the finale in two weeks!)

1. Lauren and I are actually helping turtles survive, and that’s a very important thing.”— Ben

If this weren’t network TV the phrasing of this question would be VERY different.