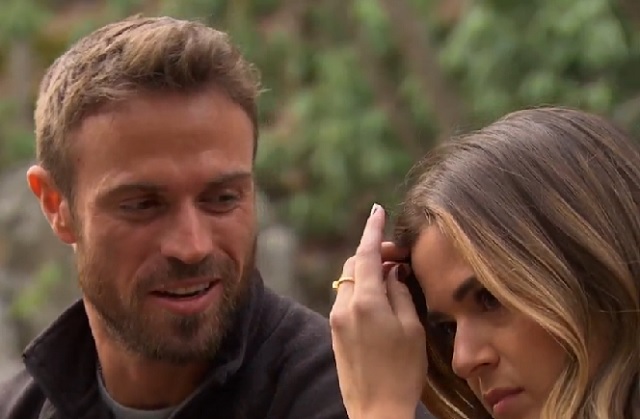 And so we say goodbye to The Bachelorette version of the Cobra Kai. Or do we…?

Tuesday’s episode kicked off right where Monday night’s left off: with Chad being told by Chris Harrison to apologize to the rest of the fellas for all the ‘roid ragin’ he’s been unleashing. That went about as well as you’d expect. Steroids aren’t exactly known for stimulating personal awareness. Chad tells the guys he’d appreciate if they just left him alone. He asks tiny little Evan — who’s about the size of one of the drumsticks Chad ate during last week’s Rose Ceremony — to stop bullying him. Everyone just shakes their head.

The doorbell rings. It’s JoJo. There’s going to be a pool party instead of a pre-Rose Ceremony cocktail hour. They all take shots and she tells everyone to take off their shirts. They respond by asking, “What’s a shirt?” I might have made that part up. The boyzzz momentarily forget about the enraged maniac threatening all of them. JoJo, after all, is about to be in a bathing suit—and, more importantly, this is the perfect time to whip out that synchronized dive they’ve apparently spent hours upon hours working on.

These guys know how to make a splash! Dive in to #TheBachelorette now! pic.twitter.com/vmcL0Bj33N

The drinks flow. JoJo speaks to Evan and Chase about Chad. They tell her that he’s insane. She’s tells us, again, that she can’t believe the cuddly and sensitive teddy bear that she likes might have two sides. She’s a really good judge of character.

The pool party ends. The Rose Ceremony begins. Ali, Christian and Saint Nick are sent home (more on them below). After that JoJo announces that it’s time to leave the mansion. The dudes are PUMPED. Surely they must be going to Hawaii or Vegas or some sort of exotic island. 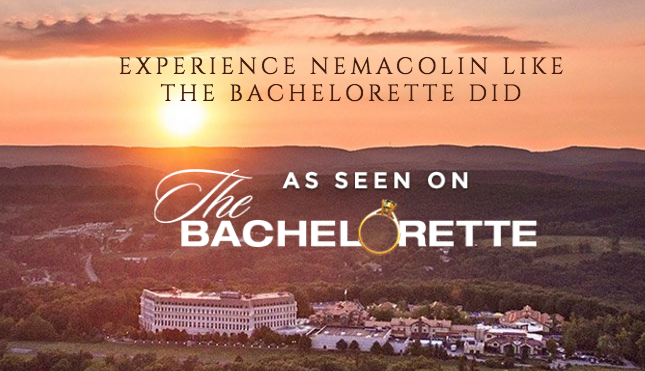 Nemacolin is apparently a place in Pennsylvania. The show moved to the woods. And first up was the group date: a trip to Heinz Field to chill with some members of the Pittsburgh Steelers, including star quarterback Ben Roethlisberger. Because any time you can get love and dating advice from a man who’s been accused of sexual assault twice, you just have to do it. If one of the contestants starts walking around with his dick flapping around and asks a bodyguard to drag a drunk JoJo into a back bathroom, well, we now know who to blame. 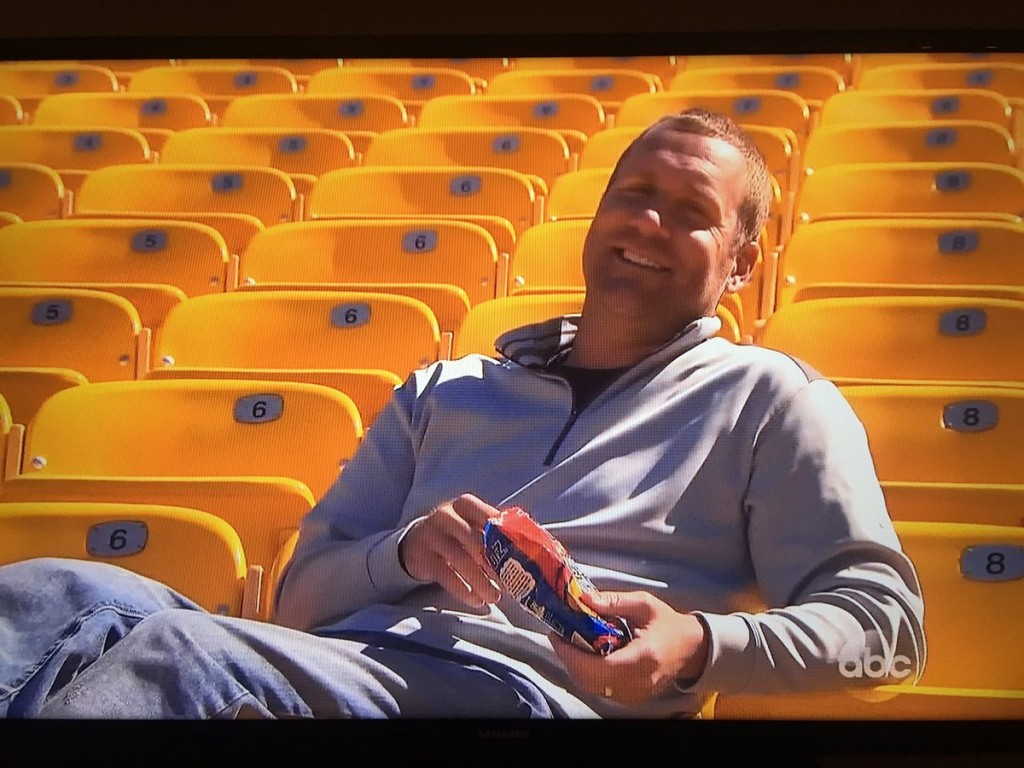 As for the football itself, Jordan, I think, threw for 1,234 yards and 72 touchdowns. But those stats might not be exact. There were vicious tackles and brutal hits. There was even blood. The blue team won. For a second, it looked like they were about to take Roethlisberger’s advice.

Meanwhile back at the house, Alex and Chad prepared for their two-on-one date. Jordan was AMPED!

Who got the date rose, and who was sent home? Glad you asked.

1. Chad: Goodbye, Chad, we will miss you. Seriously, we will. The first half of the season, when everyone gangs up on the token villain, is always vastly more entertaining than all the love bird fluff that dominates the second half. Now that Chad’s gone, the focus of the show will turn back to love. Barf!

What finally did Chad in? It could have been him threatening to hunt Jordan down after the show and go… hurt him? Kill him? I don’t know; he wasn’t really clear about that part, but he sounded serious.

It also could have been his decision to take out this poor and lovely pink flamingo. JoJo didn’t specify.

Say what you will, that is one tough flamingo. #TheBachelorette pic.twitter.com/ZBtDIlxruP

At this point, what else is there to say about Chad? Was he playing up to the cameras? Did the producers single him out as a man perfect to target? Was, as JoJo emphatically pointed out, all this his way of dealing with his mother dying just six months ago? Perhaps it was all three. (Though I’d argue that it might not be a great idea to sign up for a reality TV show while you’re mourning but again, what do I know?)

Either way, this was what the house felt like when Chad was around:

And this is how they reacted when they found out he wasn’t coming back:

They survived the Chadageddon…
Or did they?
See you in two weeks! #TheBachelorette pic.twitter.com/fyn5zc87pW

What’s that you say, not coming back…?

OK, yes, this looks scary. One caveat though: the previews for Tuesday night’s episode made it seem as if Chad was about to go native and turn the pool party into some sort of bloodbath. What actually happened? Tiny little Evan got a nose bleed and James Taylor got cut while playing football. Chad had nothing to do with either incident. My point being: I’m not buying this whole “Chad turns into Freddy Krueger thing” that this clip is trying to play up.

2. Ali: He said, I think, 10 words all season, all while reading the date card Monday night.

3. Christian: Christian had everything you look for in a Bachelorette contestant. Except white skin.

4. Saint Nick: Originally showed up in a Santa Claus suit. I can’t remember a single thing he’s done since.

1. Jordan Rodgers (1): Look at this clip and tell me that Jordan is not the clear-cut favorite. I dare you.

Listen, JoJo likes Jordan. She wants him. She needs him. She just can’t say so yet. We got a whole season ahead of us. There needs to be some drama, and so JoJo made up some flaws for Jordan.

“You’re so smooth and great,” she said. That was phrased as a problem. She added that she wished Jordan would open up to her more. Jordan, though, knows how to play this game. What’s the best way for a contestant on The Bachelor to respond to this?

“I think I’m falling for you,” he said. That earned him a group rose, his second of the season.

Yeah, I’d say Jordan has got things locked up. 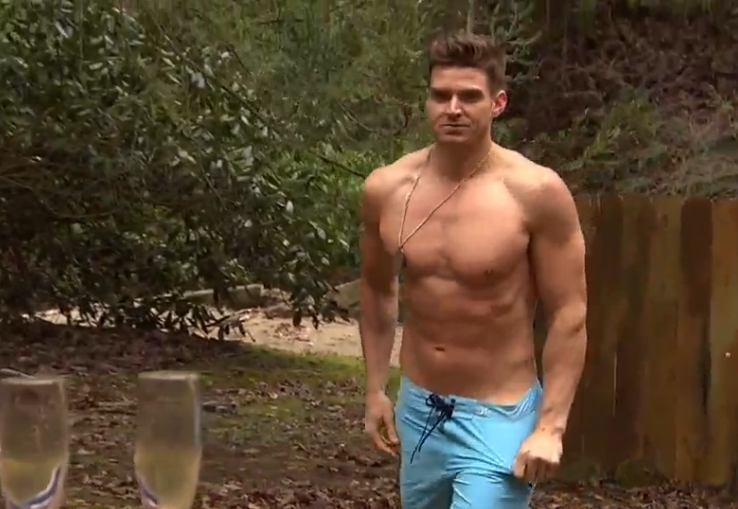 My favorite part about Luke and JoJo’s one-on-one date/hike through the woods: HOT TUB SIGHTING! No one is better at coming up with random and crazy places to set up a hot tub than the producers of this show. A 100-degree desert? Sure. An airplane? Why not. The middle of the woods on a chilly day? Perfect!

It was such a romantic sight. JoJo and Luke both stripped down to their bathing suits, perfect bodies glistening in the sunlight. JoJo strolling over to the hot tub, setting up the Bachelorette camera shot that she’s perfected—only to forget the hot tub was actually, you know, hot, and burned herself. Luke, on the other hand, seemingly has dragon blood or something and just climbed right in. 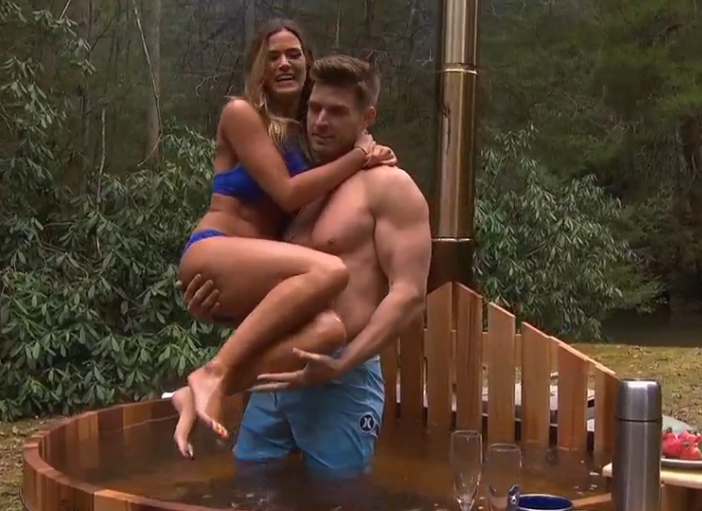 It was then time to open up. Luke talked about his time in the military and his friend who was killed in action. Does that mean I can’t make fun of him anymore? God, I hope not. JoJo fed him strawberries. Do people actually want to be fed strawberries? That seems highly annoying.

Later on, they pretended to eat at dinner and then went to some concert by some band named Dan+Shay. They danced and made out in front of hundreds of people.

So romantic! Luke and JoJo end their date with a kiss and a performance by @DanAndShay @BacheloretteABC pic.twitter.com/i9DCLIh4Us

Luke’s here for the long haul.

3. Derek (4): The most impressive thing he did all episode was hold his own against Chad. That, and strip Wells and score a touchdown on the final play of the football game.

JoJo also mentioned to Roethlisberger that Derek was one of the dudes she was feeling. I can see why.

4. Chase (3): Was part of the losing football team and then proceeded to throw all his teammates under the bus when asked about the game by the show’s producers. Not a good look.

5. Robby (5): He actually made it on camera. And spoke! And even kissed JoJo. In a sexy way (by lifting her onto a pool table in movie-fashion). And his hair remains impeccable.

6. James Taylor (6): Poor James Taylor. Dude’s a lover, not a fighter. He’s a singer-songwriter. Artists aren’t meant to play physical sports and this is why.

7. Grant (8): Fairly quiet in this episode. But still good-looking. Still funny. Unfortunately for him: still black, too.

8. Wells (9): Wells, Wells, Wells. I know you’re about 5-foot-9 and 130 pounds, but you can’t be getting stripped on the final play of the football game. HOLD ONTO THE BALL! JoJo was paying attention, too. That her voice went high when she announced his name during the Rose Ceremony, the way it would if you were talking to a baby, doesn’t scream sexual attraction either.

9. Alex (13): All season, I’ve been making fun of Alex for leading the “We Hate Chad” brigade. But I have to admit: making Chad’s ‘roid rage the primary topic during his two-on-one date private chat with JoJo was a brilliant move. He didn’t have to get JoJo to choose him; he just needed her to realize that Chad was insane. JoJo finally did and Alex gets to stay for another week.

Just don’t expect him to be around for much longer.

11. James F (12): How do you stand out at a pool party when you’re not rocking an eight-pack like the rest of the guys?

A different kind of wetsuit!

12. Daniel (15): We actually saw him speak to JoJo! I think that was the first time. Sadly, Daniel didn’t engage in any geopolitical discussion in this episode. I’m also worried how he’ll handle no longer having his boy Mussolini around.

Well, Chad certainly is one for the history books… https://t.co/0rId8GTgrK

13. Evan (16): Why am I so sure that JoJo was forced by producers to give Evan that group date rose last week?

What’s the saying, a picture’s worth a thousand words?

That Evan breaks out into a nose bleed every hour and kept asking Chad to replace the shirt he ripped ain’t making a strong case for his masculinity, either.

LINES OF THE NIGHT

I know, it’s shocking that in the 10 minutes you’ve spent together you don’t already know Luke’s entire life story and what he’s about.