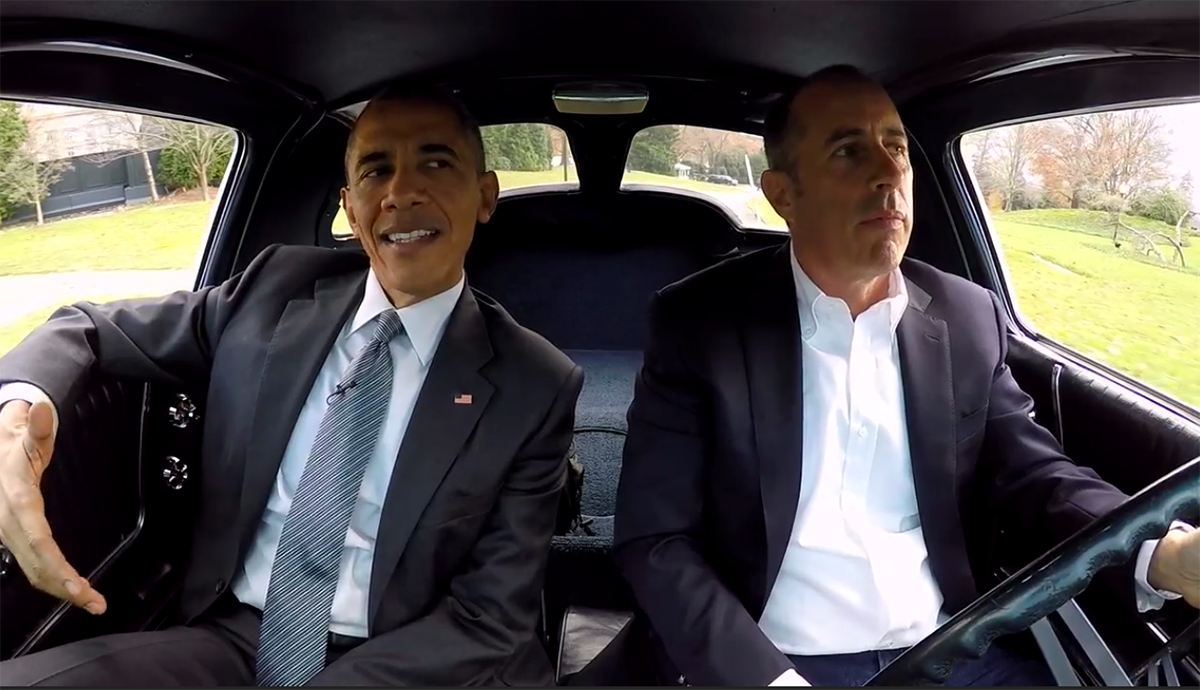 “I always wanted to be in a show about nothing, and here I am.”

“There is nothing more nothing than this.” 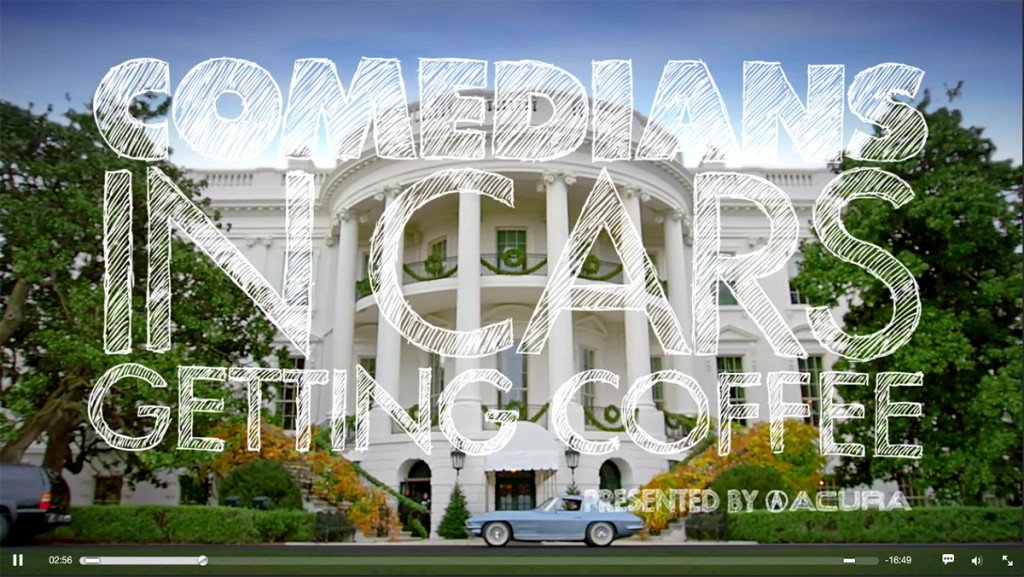 Jerry Seinfeld’s Comedians in Cars Getting Coffee is one of the great shows on the internet because it is, at it’s core, a show about nothing. Two people (and sometimes three) talking about life and work and things today and how they compare to yesteryear while sipping a coffee and/or having a snack; it’s the show Seinfeld always wanted to do, and he gets to do it while driving super cool cars and talking to his friends.

In the first episode of season seven, Seinfeld talks to someone a little more important than most of his friends: the leader of the free world. 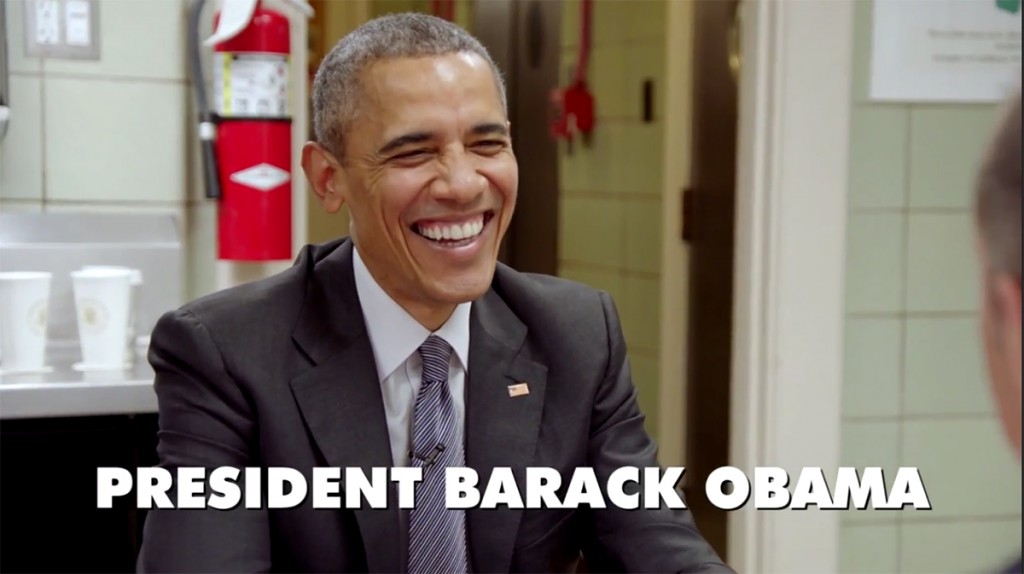 President Barack Obama kicks off this season, and his episode is as good as any you’ll have the benefit of watching. Sure, there are a few moments of “wow this is the president” but Seinfeld’s show keeps true to its format, even if the “driving” was limited just to the White House lawn. 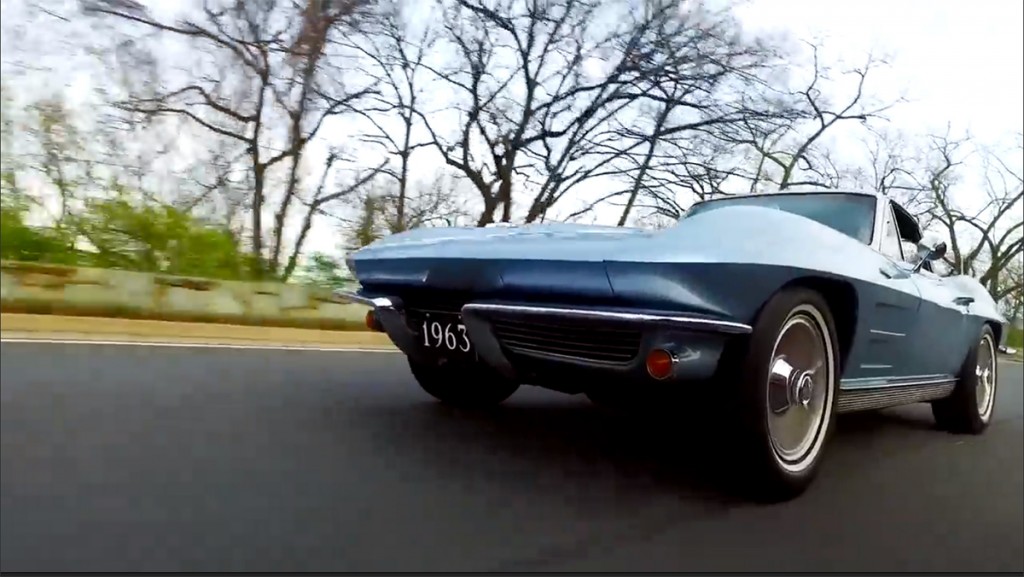 Jerry knocks on the Oval Office window, then gets to come in through a side door while the President finishes some work. So what does Jerry do? He steals an apple, takes a bite, asks if it’s washed and then leaves it on the table. Staged as it was, it’s a pretty hilarious moment to start the show. 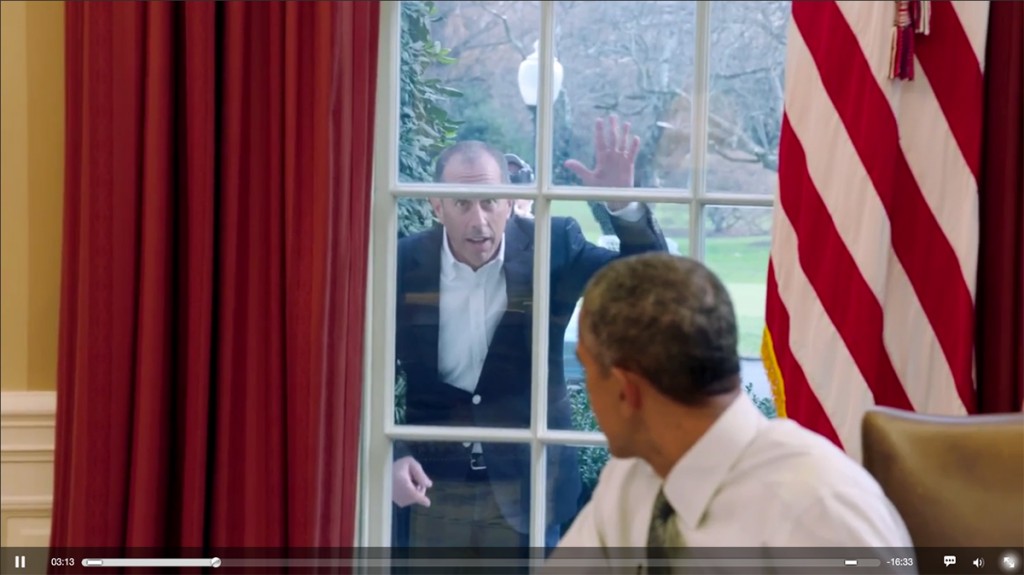 Seinfeld has become something of a master interviewer, if a reluctant one, making the show more a conversation between two insanely successful men and less a comedian getting the chance to talk to the President like we see on most of the late-night talk shows. Seinfeld starts by asking Obama if he’s okay with knowing that everyone he ever meets is putting on an act for him. 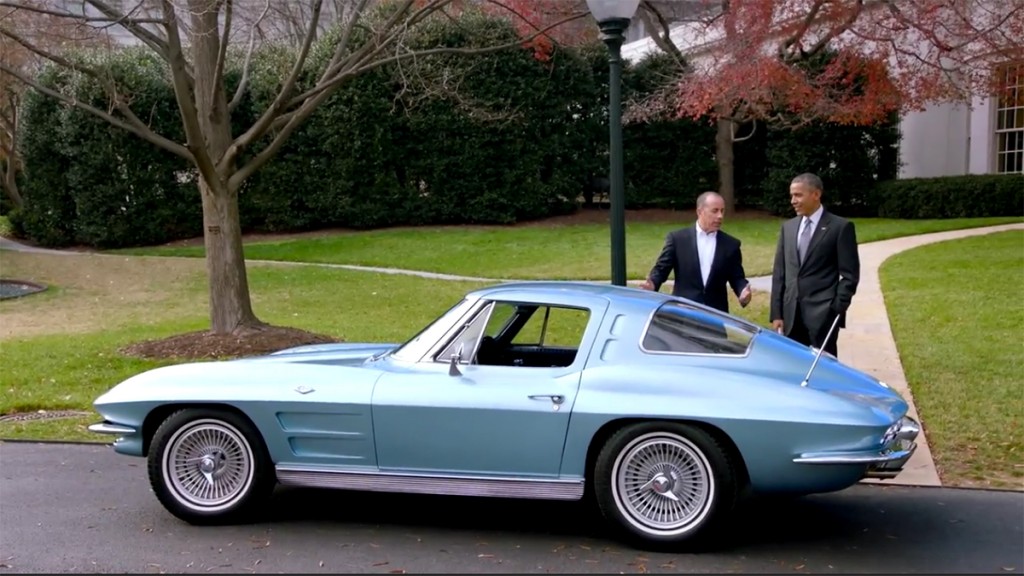 Do kids always love the president when they grow up, and do they love this president?

“I do really well with the zero to eight demographic,” Obama says. “They love me. Partly because I think my ears are big, and so I look a little like a cartoon character. And then little kids love saying my name. But it’s all one big name: ‘BarackObama.’ It’s a Nickelodeon thing. ”

They leave the Corvette Stingray and enter The Beast, an armor-plated tank of a Cadillac that has both the ability to order nukes and, as the President explains, seat warmers. So there’s that. 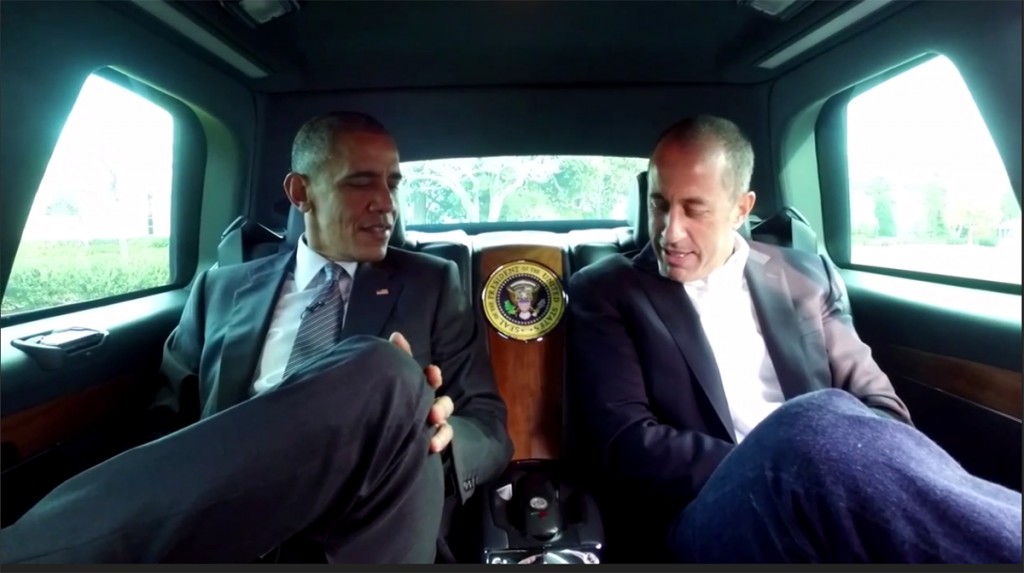 Seinfeld asks if Obama has something he wishes he could do. The answer was, essentially, take a walk in the park.

“That moment when you lost your anonymity,” the president says. “And anonymity’s not something you think about as being valuable.”

“With all due respect, I remember very well not being famous,” Seinfeld retorts, “It wasn’t that great.”

They leave the car to go get coffee, and Obama has helpers hand him a disposable cup in what seems like another planned bit. He jokes (jokes?) that he had a little nip of gin, which helps him get through the day. 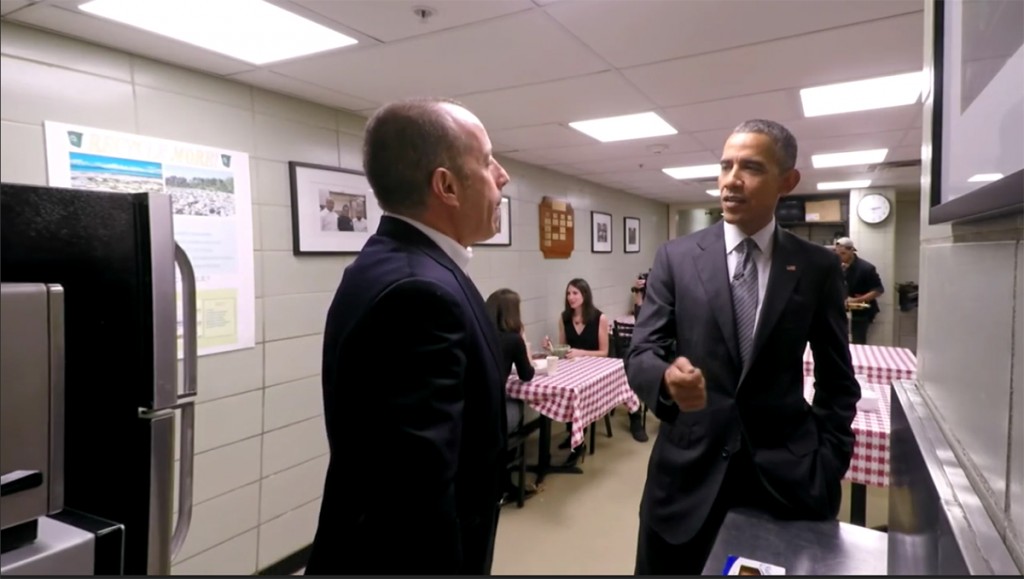 The President and the comedian take a walk through the White House, talking about Obama’s day. He gets a daily wake-up call, brushes his teeth, shaves, puts on work-out clothes, works out —”Shave before the work out?”

“Yeah, I believe in shaving before the work out, because that’s how I do it, and I don’t really need a reason.”

They go to a basement cafeteria to talk about how weird it was to sleep in the White House for the first time. “You look around and you’re thinking ‘what the hell is this?'” 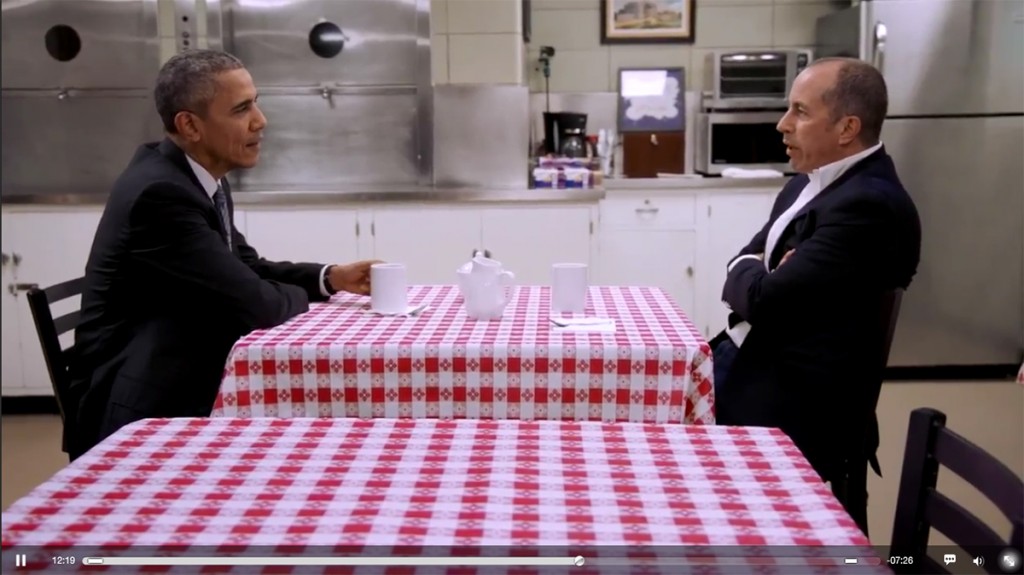 There were several underwear conversations. And talk of suits. “I have a closet like normal people.” It’s not all hard-hitting.

“What’s the coolest President commemoration to get? Because you’re in line to get something great…”

“–would be interesting, but that’s pretty exclusive real estate.”

They talk about the people Obama deals with on a daily basis and if he considers them smart or just ‘headstrong and foolish.’ The president says it varies, like any job or walk of life, which is hard to believe if you’ve listened to anyone in Congress talk for more than five minutes, let’s be honest. 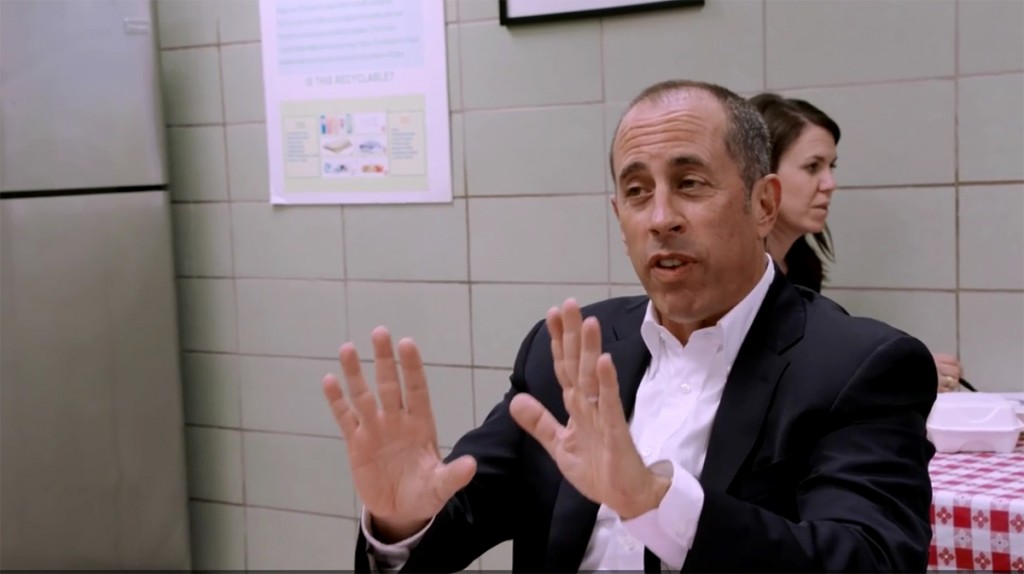 The Larry David sunscreen story is worth the price of admission. And it’s Obama, not Seinfeld, who tells it.

“What sport politics? Is it chess, is it liar’s poker?”

“That’s a good question. It’s probably most like football.”

“Football. A lot of players. A lot of specialization. A lot of hitting. A lot of attrition. But then every once in a while you see an opening.”

They discuss the percentage of world leaders who have just lost it, and the longer someone has power, the crazier they get. “Privilege is toxic,” Seinfeld says. Obama does not disagree, then turns the questions on Seinfeld, asking him how he calibrated his life dealing with being a regular old comedian who became one of the richest men in show business.

They talk about hecklers and if Seinfeld ever had the urge to make a “Jewish Citizen Kane” which now I want to see made, Jerry, I mean come on you made Bee Movie for crying out loud. 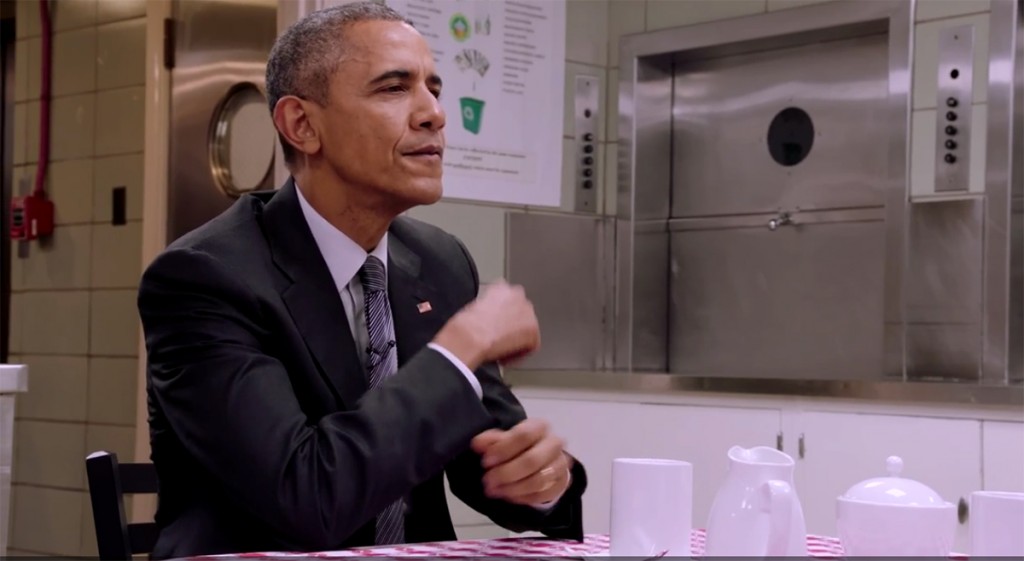 And speaking of curses, they do a half-hearted accidental but probably on purpose plug for ObamaCare before going back out to the car for more driving.

The show ends with Obama getting to drive the Vette. He peels out and drives with his wrist, stating, “I’m appreciably cooler than I was two minutes ago.” He’s not wrong. He’s just not wrong. 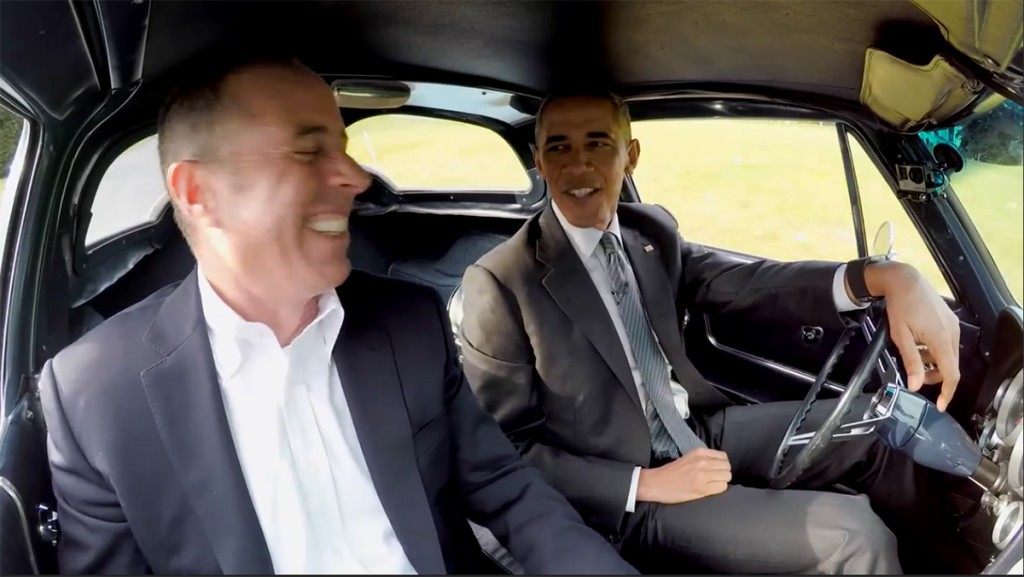 The post credits cut is pretty funny too, setting up the first scene of the show, in which Obama tells his security not to shoot the man looking in the window. “My poll numbers will go down if you do harm to Jerry Seinfeld.”

In ranking all the episodes of Comedians in Cars, this is not the best—that distinction forever goes to either Larry David or Mel Brooks and Carl Reiner, with a distant race for third—but it certainly falls in line with most of the episodes produced, which is to say very good, well shot and insightfully entertaining.

Or entertainingly insightful. Perhaps both.

This was episode 42 of the show, and there are only a handful that were bad, with many—probably more than 30—that are worth watching time and time again. The season premiere with President Obama immediately falls into that category.