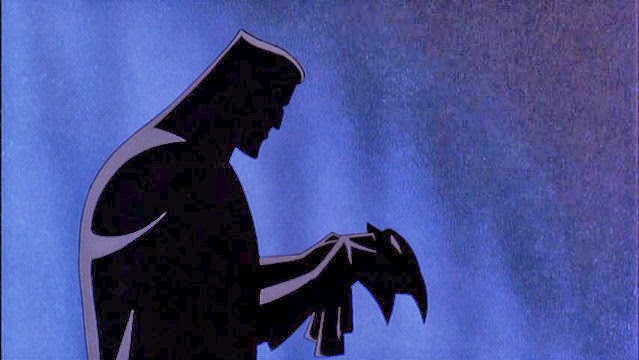 Nearly 25 years ago, long before Christopher Nolan got his hands on Batman and revitalized the Dark Knight with his movie trilogy, there was some sentiment among fans that the best Batman film had actually been made in the early 1990s. No, they weren’t talking about Tim Burton’s 1989 Batman or 1992 Batman Returns, but an animated film that was influenced by Burton’s take yet was a far more faithful adaptation from the Caped Crusader’s comic book mythology.

Batman: The Animated Series debuted in 1992, after Batman Returns premiered in theaters, and far exceeded what most would have expected from a weekday Batman cartoon. This wasn’t just a show for kids, but also found appeal among adults and critics for its darker tone, film noir and art deco stylings, and more complicated themes for its characters.

The series was such a success that Warner Brothers greenlit a direct-to-video movie. But during development, the decision was made to give the feature-length (76 minutes) animated film a theatrical release. After all, Batman is big money for the studio, and an animated movie may have been more kid-friendly than the controversial Batman Returns with its monstrous Penguin and kinky Catwoman.

So during the Christmas season of 1993, Batman: Mask of the Phantasm hit theaters. Unfortunately, the decision to go to cinemas rather than video was a hasty one, leaving little time for proper promotion. As a result, Mask of the Phantasm didn’t do very well at the box office, generating only $5 million.

But the movie did draw critical acclaim for a story that appealed to older audiences in addition to young ones and strong animation. When Mask of the Phantasm went to home video, it became a cult hit among devoted Batman fans, many of whom considered it to be better than the live-action versions of the Dark Knight on the big screen. This was aimed more at the core Batman audience, rather than a wider, mainstream viewership.

Those who already have the DVD have been clamoring for a high-definition upgrade of Mask of the Phantasm for years. To commemorate the movie’s approaching 25th anniversary, Warner Animation released the movie this week on Blu-ray, making it available for a new generation of audiences (the DVD is largely out of print or in versions paired with inferior direct-to-video Batman movies like 1998’s Batman & Mr. Freeze: Sub-Zero), while also providing remastered visuals and sound for those with nice home theater setups.

The animation looks great in high-definition, sharper and less grainy, particularly with the colors originally created. The contrast between the darker tone of the Batman scenes and the lighter, more colorful sequences with a younger, pre-Batman Bruce Wayne are notable. The excellent music composed by Shirley Walker also sounds more resonant on the Blu-ray, adding to a richer experience.

Ultimately, however, what made Mask of the Phantasm so special was its story and that holds up regardless of the upgraded visual presentation. The primary storyline concerns a new vigilante who has arrived in Gotham City to take out a handful of well-known crime bosses. But unlike Batman (voiced by the outstanding Kevin Conroy), this new crusader — outfitted in a ghostly cape with a skull mask, and using mist to obscure his appearance — is much more lethal with his justice. With Batman the only crime-fighter known to the population, that leads to speculation that maybe the Dark Knight has become more extreme.

At the same time, an old love of Bruce Wayne’s returns to Gotham City, compelling him to reminisce about what could have been before he dedicated himself to his dark crusade. This allows writers Alan Burnett and Paul Dini (both of whom did excellent work on Batman: The Animated Series) to explore the “Batman Begins” story before Christopher Nolan took it on 12 years later.

Wayne met Andrea Beaumont (Dana Delany) in their college days, brought together by their mutual mourning of dead parents. She’s intrigued by this mysterious billionaire who seems inherently unhappy despite his wealth, and he’s enamored by her fierce, aggressive spirit. The two develop a relationship, but Wayne can’t quite commit fully. He’s already made a promise to his murdered parents that he’ll avenge their deaths and try to prevent anyone from experiencing the loss he did.

But Wayne hasn’t figured out how to make that work yet. He goes out at night to fight crime, but doesn’t have the arsenal of weaponry we’re familiar with from Batman. More importantly, Wayne doesn’t have the persona to scare criminals when he appears. As well-trained as he is with martial arts, he’s just a guy with a ski mask.

Maybe his heart isn’t quite fully devoted to his crime-fighting either. Can he be a happy, normal person with Andrea, while also fulfilling the promise he made to his parents? Or does he have to choose one or the other? The choice is eventually made for him, leading to Wayne finally becoming Batman. But Andrea’s return to Gotham City brings back those old memories and feelings. Yet is it a coincidence that the mobsters being wiped out did business with her father before she was forced to flee town?

Just in case some Batman fans think this is a storyline that veers too far from the comic books and established Bat-mythology, the Caped Crusader’s arch-nemesis pops up in the story, asked to intervene by one of the mob bosses. As it turns out, The Joker (Mark Hamill) had some ties to these mob families as well, making a living in crime before the accident that turned his skin white and hair green, while also driving him insane.

Mask of the Phantasm shows a side of the hero that we’d never seen before on film (live-action or animated), which is what makes it feel so fresh and exciting. One of the more intriguing aspects of the character (which Nolan explored well) is how someone can dedicate himself to such an existence. How long could anyone be Batman before wanting to live a normal life? The Bruce Wayne we see here could have lived differently. Yet maybe he couldn’t have. Was the other life which seemed possible ever truly within grasp? And just how important is it for Batman to remember his humanity?

Despite its animated trappings and shorter length, Batman: Mask of the Phantasm manages to look deeper into the character of Batman than most of the more celebrated live-action portrayals. While several of the movies and TV shows obsess over what Bruce Wayne lost when his parents were killed, there’s little attention paid to what he left behind when he decided to dress up like a bat to fight crime. While that might make him more heroic, it also makes him sadder and more lonely — which is what makes Batman such a compelling, enduring character.