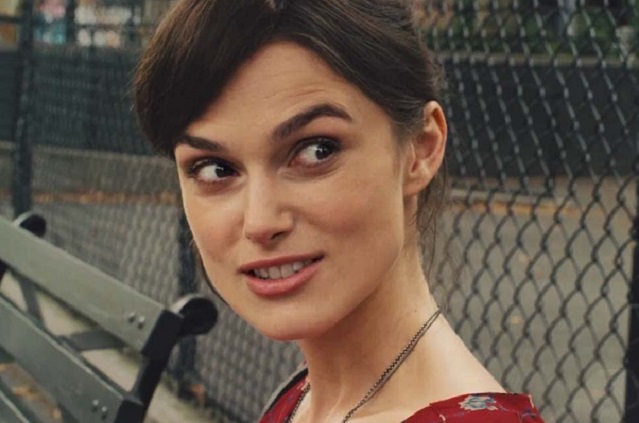 A perfectly pleasant comedy suddenly found itself open to new interpretations and scrutiny over the Memorial Day weekend, when Begin Again director John Carney chose to rip actress Keira Knightley without provocation during an interview with The Independent to promote his new film, Sing Street.

What made Carney’s remarks puzzling is that writer Elisa Bray didn’t even bring up Knightley or Begin Again to begin the interview. (Unless something was said beforehand and wasn’t noted in the finished piece.) She was there to talk to the director about his latest project and gave him an opportunity to do so. Yet Carney took a swing at Knightley right away for seemingly no good reason.

“Sing Street has had rave reviews. How do you feel about the reaction?”

Though Bray does allude to Carney going back to a smaller film after making more of a Hollywood production, she doesn’t even follow up on the Knightley remark because it has nothing to do with Sing Street. Presumably, the writer had a limited amount of time with Carney and wanted to make sure she got to the questions she wanted to ask and get the material she needed.

To be fair, the bulk of the interview does concern Sing Street, a thoroughly endearing and charming film about a group of Dublin high school students who start a rock band in 1985. It’s a movie about figuring out your identity during a period of life when the pressure is to fit in. It’s about making friends with like-minded people who see the world the same way you do. It’s about finding a creative voice, developing confidence and breaking away from influences to make your own mark. And it’s about taking a risk when playing it safe is the easy way to go. Oh, and the music is fantastic, loading the soundtrack with British rock, pop, R&B, punk and new wave that was all a part of that era.

If Sing Street is still showing at a theater near you and you haven’t yet seen it, take a break from big-screen blockbusters and enjoy a down-to-earth, slice-of-life movie that makes you remember what it was like growing up, how important it was to find the music, friends and purpose that truly meant something to you at the most formative period of your life.

Carney certainly enjoyed talking about his new film, particularly how his life experiences influenced the film. He formed a band in high school during the 1980s, finding a sense of purpose and accomplishment through music that wasn’t available to him through sports or academics. Yet being in a band and playing music also covers up a lot of insecurities and uncertainties inherent in being a teenager.

Making Sing Street apparently allowed Carney to get back into his comfort zone, not just by filming back home in Ireland, but creating something that wasn’t purely an entertainment product. Getting away from bigger budgets and dealing with movie stars was also important, which is where Carney was again critical of his experience with Knightley. Apparently, he didn’t much care for the star’s surrounding entourage and apparent unwillingness to try some different things while filming Begin Again.

“I think the real problem was that Keira wasn’t a singer and wasn’t a guitar player and it’s very hard to make music seem real if it’s not with musicians. And I think the audience struggled a little bit with that in Begin Again. And as much as I tried to make it work I think that she didn’t quite come out as a guitar-playing singer-songwriter. So I really wanted to work with musicians and actors that could play their instruments properly and sing and stuff like that.”

What we don’t know is if Carney chose Knightley to be in his film or if producers (in this case, The Weinstein Company) encouraged him to cast a popular actress that could make his film more popular with American and international audiences. Or maybe Knightley read the script and sought to be in the movie, whether because she responded to the material or wanted to work with the director of Once and act alongside Mark Ruffalo.

Perhaps Carney is mad at himself for going with star power over creative fit for the role of Gretta, a young singer-songwriter who previously subverted her talents in favor of her boyfriend (played by Adam Levine), but gets a chance to succeed on her own merits when a washed-up producer (Ruffalo) believes in her music. However, if that’s the case, the director certainly doesn’t indicate as much during the interview. He’s too preoccupied for criticizing Knightley for being a closed-off actress (dismissing her as a “supermodel”) who isn’t willing to invest herself emotionally in service of the movie.

Knowing that there may have been tension between Carney and Knightley while filming Begin Again potentially makes the film more interesting. But in watching the film — which, strangely enough, I just watched recently before Carney’s remarks — there seems to be no hint of Knightley mailing in her performance or doing something the role doesn’t call for. Ruffalo’s character is more interesting because he’s a personal and professional mess who needs to clean himself up for his career and family. Was his role written better or did Ruffalo bring more to his performance? Carney certainly seems to think he was willing to explore aspects of his character and make himself look bad or unlikable on screen for the benefit of the story. Maybe that’s what he’s ultimately getting at.

But that gets lost in what comes off as a mean-spirited, unprovoked attack against an actress who appears to have done perfectly fine work in a rather light movie that really doesn’t have much to say. The hook of the film really seems to be the visual of recording an independent album guerilla-style at various locations throughout New York City, bucking a system and industry that has sucked away the soul of a producer and stifled the creative voice of a musician. But Begin Again lacks the emotional punch and authenticity of Carney’s breakthrough film Once, and the emotional truth that makes Sing Street resonant. Carney seems to blame Knightley for that, which is harshly unfair. After all, film is a director’s medium.

Sing Street is a delightful movie that deserves all the attention it can get. But Carney doesn’t have to tear Knightley down to build up his latest film. It just makes him look like a bully and a jerk. Maybe he won’t ever work with “movie stars” again after his experience on Begin Again. But good luck to him in finding established actors (especially actresses) to work with if they know he could swipe at them in the press years later.

UPDATE (5 p.m.): Evidently, the uproar over Carney’s remarks — as well as directors like Mark Romanek and Lynn Shelton coming to Knightley’s defense — has compelled the director to realize he came off like an ass.

From a director who feels like a complete idiot. pic.twitter.com/vfO8m4U2Hl