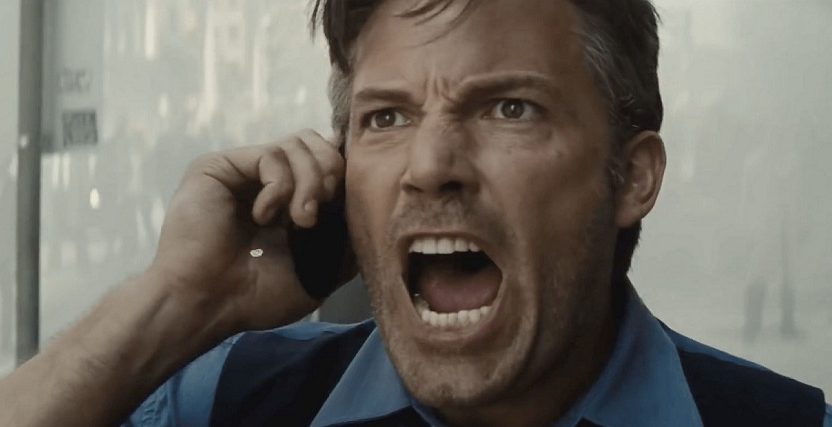 The hopes and excitement of Batman movie fans — and superhero movie fandom as a whole — were foiled two weeks ago by the dastardly news that Ben Affleck would no longer be directing The Batman, or whatever Warner Brothers’ next Batman blockbuster ends up being titled. The studio quickly recovered by hiring Matt Reeves (War For the Planet of the Apes) to capably fill the director’s chair.

As disappointing and concerning as that was, Affleck was still attached to star as The Dark Knight and brooding billionaire Bruce Wayne, and he wrote the script for the project, along with DC Films president Geoff Johns. But now there are rumblings that Affleck wants out of Gotham City altogether, and no longer wants to play Batman. What once looked like a promising blockbuster for Warner Bros. and a marquee role for a prominent actor has apparently become something he can’t wait to get away from.

Collider Movie Talk’s John Campea told viewers on Monday’s show that three separate sources have told him that the actor is trying to get out of his obligation with the role. At the very least, if he still has to play Batman in the character’s upcoming standalone film, it’s the last time he intends to put on the cowl and cape.

As Campea made clear, this shouldn’t be taken as a report. He doesn’t work for a Hollywood trade like Variety or The Hollywood Reporter, the established outlets that are typically trusted to break this sort of news. (For example, Variety‘s Justin Kroll reported that Affleck was stepping aside as The Batman director and that Reeves was in talks to become his replacement.) But Campea is a movie news blogger who takes his job seriously (and poked fun at himself in the above video for the “scoops” that were proven wrong) and has criticized other sites and writers in the past for reporting rumors as news.

Having said that, it’s certainly notable that Campea has heard about Affleck’s dissatisfaction from three different sources and seemingly confirms rumors that have been circulating ever since Affleck relinquished his directorial obligations on the next Batman film. Regardless of whether or not it’s true, the rumors feed the perception that DC Films are an entirely troubled venture with no true direction and no apparent hope of making a film let alone a series of films that can utilize a set of iconic, globally famous properties into a franchise capable of matching or even surpassing what Marvel Studios has accomplished with their superhero characters.

Affleck not only signing on to play Batman, but eventually direct a Batman movie was supposed to change that narrative. The anticipation for a filmmaker who directed an Academy Awards Best Picture winner (2012’s Argo) helming a tentpole superhero movie and providing the same sort of cinematic credibility that Christopher Nolan brought to Gotham City is now significantly diminished. Reeves is a strong replacement and should do an excellent job, based on his past filmography. But the project may always have a “what if?” and the promise of something greater hanging over it, unfairly or not.

i have less faith today that Ben Affleck will helm a Batman movie than I did a month ago.

Perhaps this outcome was inevitable, given the push-and-pull that seemed to be taking place between Affleck and Warner Bros. over getting The Batman into production. Affleck insisted that the script he was working on wasn’t yet ready and didn’t want to begin filming until that foundation was set. (Any chance he learned some lessons from Batman v Superman: Dawn of Justice or even the upcoming Justice League about the hazards of putting superhero movie machinery in motion without the story locked in place?) But with Argo and BvS screenwriter Chris Terrio reportedly rewriting the script, that’s apparently ready to go and Reeves’ hiring presumably puts production back on track.

Warner Bros. understandably wanted to get another Batman movie rolling as soon as possible. The Caped Crusader is huge business for the studio. And though superhero movies often look like guaranteed success, there always is a bit of uncertainty as to whether or not audiences will respond to new characters who haven’t penetrated mainstream pop culture. Batman, however, is a sure thing. With Affleck attached, there was also a strong chance The Batman would receive critical acclaim as well, something that has eluded many blockbusters despite their box office totals.

With everything at stake, it appeared that Warner Bros. would ultimately cede to its Academy Award filmmaker. Affleck has brought the studio considerable prestige in recent years, and presumably wants to keep him happy. But superhero movies are an entirely different enterprise, a machine that typically doesn’t stop for any one person. Affleck stepping down as The Batman’s director showed that not even he could keep the Batmobile idling while WB was ready to fire that engine.

But if he now also wants to give up playing Batman entirely, that would seem to indicate that taking the role — along with everything else which then came with it — became far more overwhelming than Affleck wanted to deal with and maybe even speaks to a larger issue with superhero franchises for movie studios. 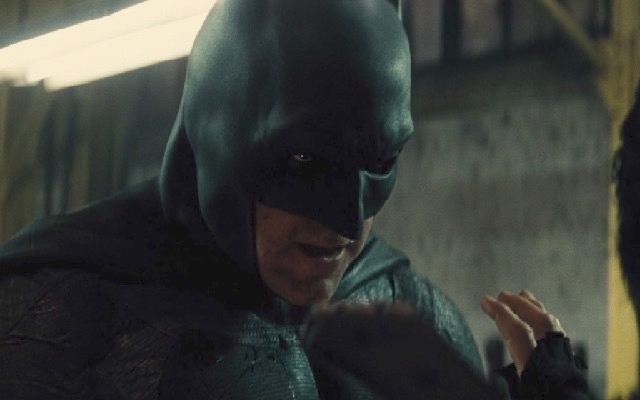 Besides Affleck’s pedigree as a director, one of the reasons that him making a Batman movie was so intriguing was because no one had written, directed and starred in a superhero blockbuster before. How often does that happen in any tentpole film? Robert Downey Jr. may be a rock-star promoter for Marvel and chime in with script and production notes. But he’s not writing and directing those Iron Man and Avengers movies. Most bankable movie stars aren’t also successful directors, but Affleck had re-invented himself over the past 10 years and revitalized his career.

That’s why so many were surprised when Affleck agreed to play Batman in the first place. Wasn’t he a director now? How would he follow up Argo winning Best Picture? He’s going to play a superhero — make that the superhero — who will wear a mask during at least one-third of his screentime, just a cog in Warner Brothers’ large comic book franchise empire?

But Warner Brothers didn’t just want Affleck as an actor. The studio wanted the entire package, the filmmaker who wrote and directed Gone Baby Gone, who wrote, directed and starred in The Town, Argo and most recently, Live By Night. Affleck was obviously intrigued by getting to do everything on a Batman film, helping to define a character for which he clearly holds a lot of affection. This hadn’t been done before, and the challenge of that surely held significant appeal.

However, the job soon became too much to handle. Affleck was only an actor in Batman v Superman, though reportedly had input on the script and used his time on set to learn about superhero movie-making from Zack Snyder. Yet that’s still a huge difference from taking on all of the major responsibilities for a huge, $200 million-plus production like a Batman film. Affleck wasn’t going to be left alone to get everything right, to make just the film he wanted. The constant scrutiny about the Batman script and getting production underway was a public indication of that pressure. Back off and let me do my thing, Affleck said. WE WANT BATMAN MOVIE, replied Warner Brothers.

The box office and critical failure of Live By Night may also have been a wake-up call, albeit a slow-building one. Prior to Affleck’s latest film, he had the golden touch. Live By Night was a deeper dive into period filmmaking and attempted to tell a wide-ranging epic about organized crime, Prohibition, racism in the deep South, and romance, while exploring the existential nature of a conflicted criminal. It was the sort of ascendant project that would represent the next step in Affleck’s progression as a filmmaker, that would entrench him as an A-List director (if he wasn’t one already). Though Affleck never said this, it’s not difficult to imagine that he viewed this film as his Dances With Wolves, Braveheart or Unforgiven. But it was a huge flop.

With that, Affleck may have learned a huge lesson. Perhaps Live By Night was too ambitious a project for one filmmaker to take on the writing, directing and lead role. Especially when the clock was ticking for Affleck to return to the DC Comics Extended Universe and start playing Batman again in the Justice League movies, then get started on the standalone Batman film. Live By Night was a passion project for Affleck, yet it became an afterthought for everyone who talked to the director about his latest film. He finally expressed frustration over his movie being ignored in favor of the global corporate icon that was expected to gross a billion dollars for Warner Brothers. But that was the business he chose when he decided to don the Batsuit.

This is the problem with superhero movies (and probably blockbuster movies in general). They’re made to hit release dates, stake a claim on a particular weekend (ideally a holiday) and maximize revenues. Making the best movie possible is a secondary concern. That may not be the case for Marvel, but the difference there is that Marvel Studios only makes Marvel superhero movies. Warner Brothers has many more films on its slate each year. They want to make family-friendly tentpoles, mid-range comedies and prestige, Academy Award-caliber dramas in addition to their DC Comics superhero franchises. And though the filmmaker is important throughout that process, there is ultimately a larger master to serve when it comes to producing a guaranteed money-maker like a Batman movie.

Everyone seemingly loses in this process. Affleck doesn’t get to direct what he hoped would be the quintessential Batman film. Fans miss out on an A-List filmmaker bringing legitimacy to the superhero movies they love. And the studio doesn’t get to associated a prestige filmmaker with a tentpole property. Who wins? Well, Matt Reeves certainly wins now, since he gets to direct the next Batman movie. Whoever replaces Affleck under the cowl if he gets to leave will also likely be a winner. (That’s a whole other column, but I’ll just throw three names out there: Colin Farrell, Armie Hammer and Jon Hamm. Total guesses. Or maybe Joe Manganiello will switch from playing Deathstroke to Batman. Personally, I liked Josh Brolin before Affleck was picked, but he’s playing bad guy Thanos for Marvel now.)

In the meantime, the questions only get larger and louder for DC Films and Warner Brothers. Affleck was supposed to take care of all that, but instead he’s left a gaping hole in Warner’s plans. Getting to be Batman apparently wasn’t that much fun, after all.