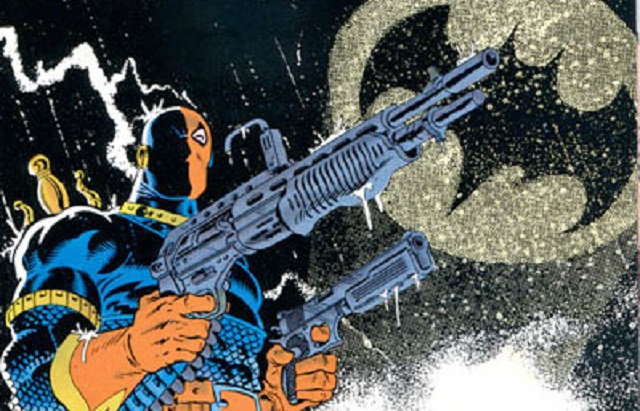 Ben Affleck decided to have some fun with the comic book/superhero movie fanboy internet Monday morning. No, it wasn’t another rant about Roger Goodell and DeflateGate. Nor was it an appeal for a charity fundraise initiative. No, Affleck essentially lit up the Bat Signal for fans looking for news on his standalone Batman film.

Cinema’s latest Caped Crusader, who made his on-screen debut in Batman v Superman: Dawn of Justice and will next be seen in next year’s Justice League, posted the following video on Twitter early Monday, surely knowing it would cause a stir.

For those unfamiliar with the DC Comics universe (and if you’re still reading this post despite that, thank you), the gentleman in the video is Deathstroke (also once called The Terminator, but you can understand why DC ditched that part of his name), a former special forces operative who was subject to experiments by the U.S. military to enhance his strength and speed. He’s like Captain America, if he decided to be a badass mercenary for hire.

Deathstroke (whose civilian identity is Slade Wilson) was initially created in 1980 as a villain for The New Teen Titans. (He was also involved in arguably the best Titans story arc, 1984’s “The Judas Contract,” during which one of his allies infiltrated the superhero team and took each member down from within. The story will be adapted into a DC Original Animated film to be released next year.)

But over the past 10-15 years, Deathstroke has become a villain in the larger DC Comics universe. He was the main bad guy (played by Manu Bennett) in season two of The CW’s Arrow and an adversary for Batman in the Arkham City Lockdown and Arkham Origins video games. The guess here is that those video game confrontations with Batman is what inspired Affleck (and co-writer Geoff Johns, DC Entertainment’s president) to reportedly use him as the villain for his upcoming Batman movie.

Soon after Affleck posted his Twitter video, which appeared to be test footage to demonstrate how the character and his outfit would look on screen, speculation began as to whether this meant that Deathstroke would be a villain in the Batman or Justice League movies, or if Affleck was messing with the fanboy crowd, teasing them with a popular character. The Wrap’s Umberto Gonzalez followed up Affleck’s tweet with a report that Deathstroke was indeed going to be the main bad guy in Affleck’s solo Batman film.

That comes as a bit of a surprise, considering that the Batman mythology has plenty of other villains to choose from, such as The Joker, Harley Quinn, Deadshot and Killer Croc (just seen in Suicide Squad), along with Two-Face, The Riddler, The Scarecrow, and Bane among the deep rogues gallery that the Dark Knight has developed over 75 years of DC Comics. There was also a report in May by Birth.Movies.Death’s Devin Faraci that the movie storyline could involve virtually every Bat-villain, as the character was going to be trapped in Arkham Asylum, where Batman locked most of his arch-enemies up.

This would appear to shoot down the rumors of an All-Star lineup of Bat-villains for the next film, but there’s no reason that Deathstroke couldn’t be the ringleader of some larger scheme. (He was rumored to make an appearance in Suicide Squad, but that was either never true or nixed during development.) What’s intriguing about this choice, however, is that Batman apparently won’t be fighting a villain we’ve seen him matched up against in previous movies, and Deathstroke is a character that will likely result in some outstanding fight scenes, something most of the Batman movies have lacked.

But Deathstroke being used as the bad guy in a Batman movie (and maybe he’ll make an appearance in Justice League, though that’s total speculation and unlikely at this point in production) would explain why Warner Brothers’ movie division told the TV wing that the character could no longer be used on shows like Arrow (a restriction also placed on the Suicide Squad villains), an unpopular move with fans who felt that Slade Wilson has been Oliver Queen’s best adversary during the first four seasons of that series.

However, if Slade Wilson is set to be matched up against Batman on the big screen, that would be one hell of a consolation prize for geek nation.