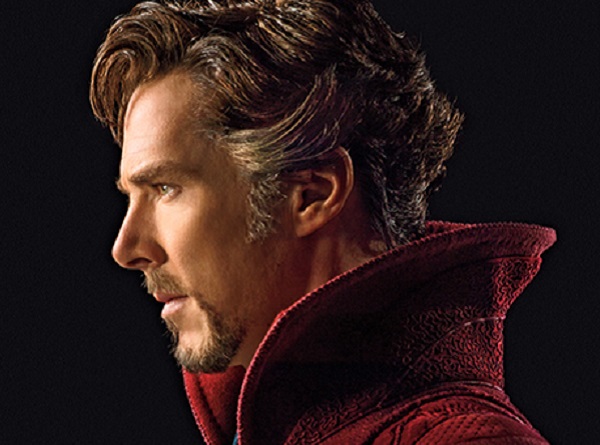 Marvel and Entertainment Weekly didn’t waste any time shaking off a Christmas hangover, providing geeks with a nice gift to begin the final week of 2015. The latest issue of the magazine features a first look at Benedict Cumberbatch as Marvel’s Doctor Strange on its cover.

Filming on Doctor Strange just began in November and according to the EW article by Clark Collis, the cover photo shoot was one of the first times Cumberbatch fully suited up as the Sorcerer Supreme and really got into the character. The production is in such early stages that Marvel hasn’t even announced the roles some cast members, such as Rachel McAdams and Mads Mikkelsen, will play in the film, directed by Scott Derrickson (Sinister).

I’m guessing most fans of Dr. Strange will say that he got the look just right. Graying temples and goatee, the red cape with high collar, and the Eye of Agamotto amulet are all key parts of the sorcerer’s ensemble. Then to put a fine point on it, there’s a mystical symbol representing whatever spell the sorcerer is conjuring up.

Imagined by Steve Ditko (who also co-created Spider-Man) in 1963, Dr. Stephen Strange — whose name you might recall was mentioned in Captain America: The Winter Soldier — was an egotistical surgeon who suffers nerve damage in his hands after a car accident. When he can’t find a cure for his condition, Strange travels to the Himalayas hoping to find extraordinary means for healing. That brings him into contact with a whole other world of sorcery and alternate dimensions.

Longtime fans of Dr. Strange might say that Cumberbatch actually doesn’t have the character’s hand gestures right. One of the signature traits in the comic book pages are the Doctor’s unusual gesticulations used to invoke whatever magic he’s tapping into. Cumberbatch is still getting a feel for that, as he said in the EW article.

“I’m still in the infancy of learning all that,” Cumberbatch told Collis. “It was like, okay, I’ve got to keep throwing these poses, these spells, these rune-casting things, everything he does physically. I’m thinking, there’s going to be a huge amount of speculation and intrigue over the positioning of that finger as opposed to it being there, or there. And I’m still working on that. We haven’t played any of those scenes yet. I felt really self-conscious. But, then, by the end, it was great. It’s like anything, you just have to experiment.”

Considering the actor is sure to be surrounded by plenty of digital effects resembling Ditko’s psychedelic illustrations, he’s not going to look foolish on screen. Besides, Cumberbatch surely knows that he’s got to embrace that stuff fully to make the character believable. For a guy who played the dragon Smaug in the Hobbit films, indulging fantasy is probably not an obstacle for him.

Doctor Strange is set for a Nov. 4, 2016 release. Joining Cumberbatch, McAdams and Mikkelsen in the cast are Chiwetel Ejiofor and Tilda Swinton. The new issue of Entertainment Weekly will hit newsstands this week.