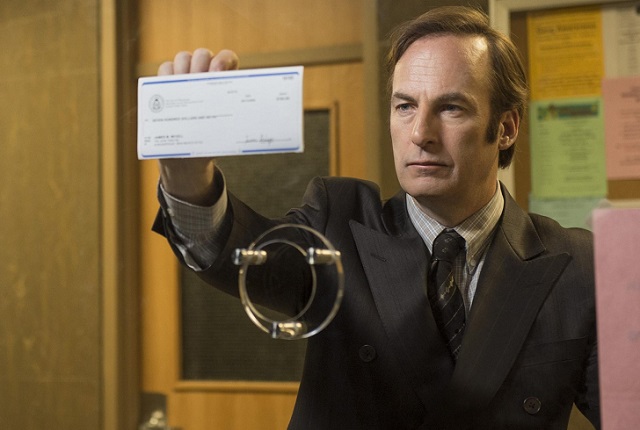 Slippin Jimmy McGill is making his way back to television as season two of the critically-adored Better Call Saul kicks off. The spinoff of AMC’s Breaking Bad is a prequel, telling the story of how a small-time lawyer with a heart of gold became Saul Goodman, shyster lawyer to the Albuquerque stars. (And by stars, we mean drug dealers and fiends.)

There were some nerves from Breaking Bad fans when show creator Vince Gilligan announced the spinoff from what everyone thought was a joke to put people off the trail that Saul might end up dead before Breaking Bad ended. He couldn’t if he was getting his own show, right? Now, with Better Call Saul a prequel, it didn’t much matter who died in Breaking Bad — rest in peace, the floating body of Mike Ehrmantraut — but the show proved its value from the very first scene, a black-and-white telling of what happened to Bob Odenkirk’s Goodman character after he fled the gun-filled, meth-fueled world of Walter White and Jesse Pinkman.

Please do watch our first episode of Better Call Saul, season 2, TONIGHT on AMC. It does not feature Yeezus. Apologies to Yeezus.

Better Call Saul is the story of a guy trying to become the man, and all the fumbles and bumbles along the way. In season one, the closest we got to seeing Saul Goodman, ESQ. was a young Jimmy McGill telling someone he was about to rip off, “S’all Good, Man” in one of the most clever and lengthy puns in TV history, if that joke originated at the same time Goodman first appeared on Breaking Bad.

Better Call Saul is a very good show, which is somewhat rare for spinoffs. Often, viewers are left with “did we really need that show” and while many thought that before last year, few were saying it by season’s end. With that, here are ten of the best spinoffs in television history, with a quick list of honorable mentions and an important distinction between what is or isn’t a spinoff.

Not on the list below: Lou Grant, which let’s be honest, predates most of us and was critically acclaimed at the time, but warrants a mention for taking a comedic character and putting him in a dramatic lead. It also doesn’t list any of the following shows: The Flash, Star Trek, NCIS, CSI or Law & Order, which are essentially franchises more than traditional spinoffs.

The Flash wasn’t a spinoff of Arrow, so much as an expansion of the DC television universe using Arrow‘s success to grow the franchise. The same can be said for Legends of Tomorrow which, let’s face it, is more of a spinoff of both those other shows and has stumbled out of the gates. Star Trek: The Next Generation is not a spinoff but a reboot, and Voyager and Deep Space Nine are, like the DC shows, something more of an expansion of the universe than a spinoff. The same case can be made for crime procedurals like the NCIS franchise, spawn from JAG notwithstanding, CSI and the L&O chapters, even if SVU at its height was as good or better than the mothership.

Spinning off from Buffy the Vampire Slayer, vampire Angel moved to Los Angeles to start a detective agency, creating an entirely different show than the one that spawned him. No high school angst here, but still battling demons — inner and outer.

Lisa Bonet’s Denise Huxtable often seemed like she didn’t quite fit on The Cosby Show, and she became much more interesting when she went off to college (fictional Hillman College). This show also gave us two memorable characters in Dwayne Wayne (those glasses!) and Whitley Gilbert.

8. The Facts of Life

Jumping off from Diff’rent Strokes, with the Drummonds’ housekeeper, Edna Garrett, going off to be the housemother at a private all-girls school, this is arguably one of the most successful spinoffs ever. The show lasted nine seasons, and NBC wanted a 10th, but some of the cast didn’t want to return.

The Andy Griffith Show was a spinoff? Indeed, it was, beginning on a show called Make Room for Daddy (which later became The Danny Thomas Show), which also spun off Gomer Pyle, U.S.M.C. The spinoff far surpassed the original, as Andy Griffith lasted eight seasons and became a TV icon, still playing in reruns.

This is a different sort of spinoff, where Beverly Hills, 90210 was used to launch a new series, rather than the show developing organically from the original, but because subsequent expansion of the 90210 universe proved to be foolish, this is more of a traditional spinoff than a franchise expansion. Evolving from following young singles at an apartment complex to an outright soap opera, Melrose Place lasted seven seasons, creating some of the most wacked storylines and characters (Dr. Kimberly Shaw, anyone?) ever seen on network TV.

How iconic was The Jeffersons? Its theme song was just used in a Super Bowl 50 commercial, proving its timelessness. The show spun off from All in the Family, as George and Louise Jefferson were originally Archie Bunker’s neighbors before moving to that deluxe apartment on the east side for a sitcom that lasted 11 seasons and gave us two of the most memorable characters in TV history. Maude was also a spinoff from All in the Family, which in turn spun off another sitcom, Good Times. (The Jeffersons spawned its own spinoff, Checking In, which lasted only four episodes.)

Perhaps a controversial choice, since The Colbert Report isn’t a sitcom or dramatic series. But Stephen Colbert was certainly playing a character and though the show took its material from the headlines, it was a scripted comedy. And Colbert’s persona spun off from The Daily Show, where he was an opinionated, fact-challenged, right-wing reporter and commentator who finally got his own outlet to express his views on what was wrong with this country. Colbert was so good playing this character that many wondered whether or not he could be himself when CBS announced that he would succeed David Letterman on The Late Show. We’ve since learned that, yes, Colbert is just that good at comedy.

Spinning off from Happy Days, Laverne & Shirley was a TV institution for a generation, running eight seasons on ABC and giving us one of the most memorable theme songs ever made. Can anyone (well, maybe of a certain age) visit Milwaukee and not think of this show and Shotz Brewery? (Did Laverne and Shirley really move to California for the final two seasons of the show? Say it ain’t so.) The series also had an excellent supporting cast with neighbors Lenny and Squiggy (Michael McKean will never not be remembered as Lenny, even if he’s the best part of Better Call Saul) and Shirley’s boyfriend Carmine. Poor Carmine. The dude is probably taking a cold shower as you read this. By the way, did you ever try milk and pepsi together?

It’s worth noting that another Happy Days spinoff, Mork & Mindy was almost as good —and certainly as memorable —as Laverne & Shirley. Robin Williams was at his comedic best as the alien who came down to Earth, trying to fit in to society in hilarious fashion. Na-Nu Na-Nu, Mork’s catchphrase, was one of the most popular sayings on any show at the time. (Now let’s never mention Joanie Loves Chachi, please.)

Very few, if any, would argue that Frasier surpassed the series it spun off from. Many would call Cheers the best sitcom of all time. But how many would have predicted that a regular patron at Cheers, known more for being Diane Chambers’ love interest after Sam Malone and eventually having a legendarily uptight wife, would move to Seattle and star in a fantastic sitcom of his own? Dr. Frasier Crane as a radio psychiatrist was the perfect profession for the time (mid-1990s to early 2000s), as radio call-in shows were all the rage. But the show wouldn’t have been a hit without its supporting cast of Frasier’s brother Niles (David Hyde Pierce), cranky father Martin (John Mahoney), physical therapist Daphne (Jane Leeves) and radio producer Roz (Peri Gilpin). An episode could have been centered around any of those characters and provided a wonderful half-hour of comedy.

The Simpsons began as animated shorts running between comedy sketches on The Tracey Ullman Show, but these characters could only be held back from their own show for so long. There has never been a more successful TV spinoff, with The Simpsons running for 27 seasons and counting on Fox. The show defined Fox as a network, and surely saved it more than a few times, giving TV audiences at least one show that had to be watched each week. Homer Simpson is a cultural icon, one of the best TV characters ever created. Try to get through a week without someone quoting him somewhere in your life.

The Simpsons is the longest-running sitcom in U.S. TV history, let alone the longest-running animated program. And it’s also the longest-running scripted primetime series ever to run on American television. Oh, and it also spawned a movie that grossed more than half a billion dollars worldwide. It’s an institution, a franchise — actually, a term should be invented to solely apply to this show, because nothing else adequately applies.