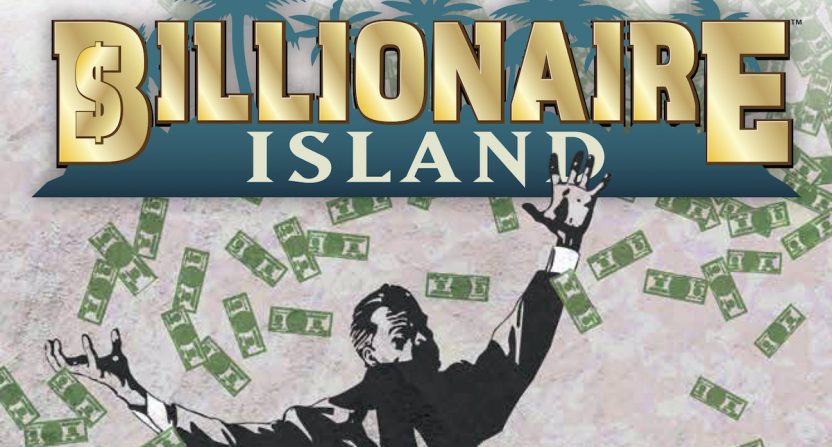 If you were told the billionaires of the world had decided to build their own luxury island where they could live among themselves — away from the general populace and the ethics and laws of regular society — would that surprise you? The idea doesn’t seem entirely far-fetched, does it?

That’s the premise of Billionaire Island, written by Mark Russell and illustrated by Steve Pugh. The six-issue comic book series from Ahoy Comics has been collected into a paperback that will be released in bookstores on Nov. 24. (The book was released this week for comic book stores, if you’re interested in getting it earlier and have a comics retailer nearby. That independent shop would love your business!)

Russell’s story takes place in 2045, far enough into the future to still be fiction, but not so far that it’s not plausible. Climate change has caused a catastrophe, destroying global coastlines and rendering many regions unlivable. Overpopulation and food supply are major concerns, and the wealthy elite — from their exclusive island sanctuary — has decided that significantly reducing the population is the best solution for the world.

The mastermind behind the billionaire island (known as “Freedom Unlimited”) and food supply laced with a secret sterility virus is Rick Canto, who made his fortune in social media. Readers will likely think that Canto is inspired by Facebook founder Mark Zuckerberg and Pugh’s illustration certainly leans in that direction. (And the idea for a man-made pandemic came before the actual pandemic we’re all currently experiencing.)

But in an e-mail interview with The Comeback, Russell said the inspiration for Billionaire Island came from a variety of places.

“The reality that I talk about in Billionaire Island has been developing for centuries, so it could have been written long before 2016,” said Russell. “But the story ideas themselves came to me right around the time Steve and I were working on The Flintstones [in a 2016 series for DC Comics].

“When I started reading more about billionaires building bug-out bunkers and buying private islands. It occurred to me that what I was reading about was, in a lot of ways, the bookend to the story I was writing about. The story of human civilization and where it went wrong.”

The disdain that the mega-rich show for the planet’s less, and far less, fortunate is both hilarious and disturbing. As the best satire often does, Russell cuts very close to reality with his imagining of how extravagantly and absurdly the world’s billionaires choose to live. Even the worst societal outcasts (some of whom readers will recognize) can still live the high life as long as they’re ridiculously rich.

Perhaps the most outlandish concept and character in the story is Business Dog, a boxer who inherited the world’s greatest fortune when his owner died. He determines the rise and fall of the world economy by which food he eats from the bowls presented to him each day. 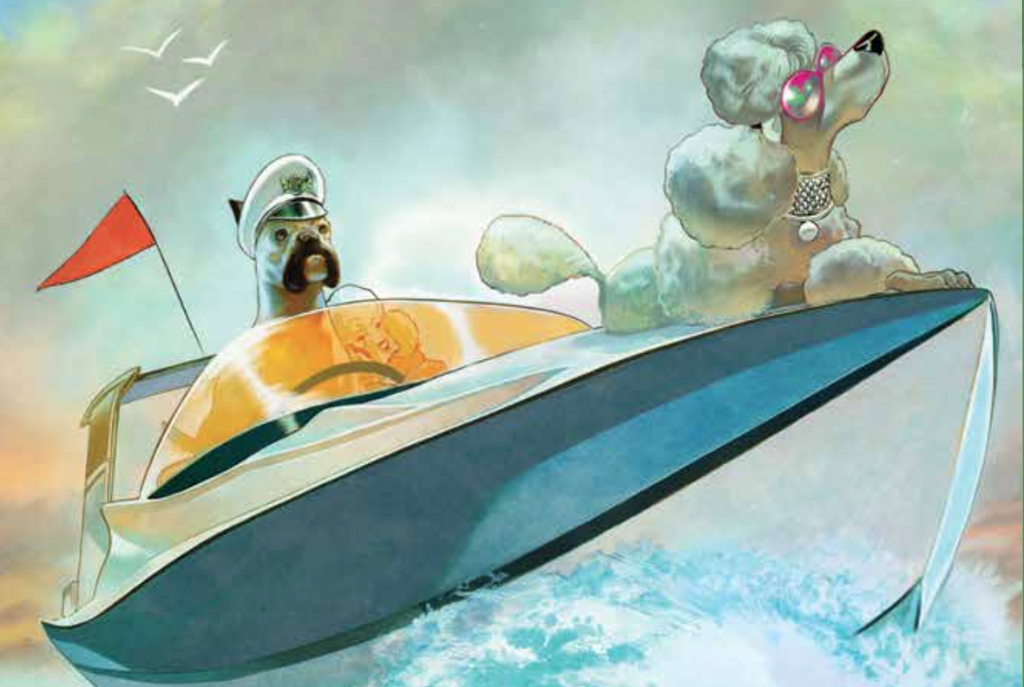 Ultimately, the only concern for Billionaire Island‘s disgustingly wealthy show for what’s happening to the rest of civilized society is how it affects their wealth and ability to profit from others’ suffering.

“It’s ultimately the story of hoarding,” said Russell. “And those who’ve devoured the planet trying to get one last bite of the apple to tide them over until we’re done fighting amongst ourselves over the core.”

Russell previously explored the idea that people were defined largely by their economic function. In The Flintstones, much like the original cartoon, animals serve as — and are named after — lamps, coat racks, and bowling balls. In Billionaire Island, those who aren’t wealthy are servants. And if they have no use, they’re kept in what’s essentially a hamster cage for humans.

Yet somehow those in servitude are made to believe that they live comfortable lives, thanks largely to the elite in positions of power.

“Whether they be billionaires, religions, companies, or governments, there is always the problem with institutions getting to the point where they’re less about serving the people they’ve vowed to help and more about serving their own survival,” said Russell. “About keeping their resources for the benefit of the institution itself. And I think that’s the danger that lies at the heart of much of my work.”

Billionaire Island is available in bookstores and from online retailers on Nov. 24.