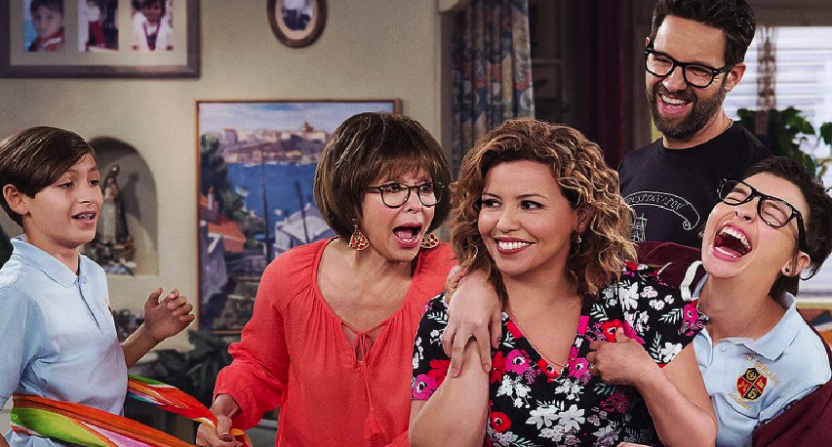 As is probably true of most people who use the internet with any regularity, I was not of the generation that watched the original version of One Day at a Time that aired on CBS from 1975 to 1984. I was also only vaguely familiar with the work of Norman Lear. (If you’d like to learn more about Lear, PBS aired a documentary about him last year.)

I was, however, aware of his reputation for unflinching takes on real world and controversial issues within the framework of a sitcom. That continues here, with a fresh spin on the show, which carries only the name & one character name to the new (rebooted?) version of One Day at a Time, which recently debuted on Netflix.

The very first episode of Netflix’s One Day at a Time starts with our lead, Penelope (Justina Machado, Six Feet Under), pointing out to a dismissive patient that the picture of her in camouflage is not a Halloween costume, but her uniform from her time serving in Afghanistan. And it is somehow still very funny. Sexism and comedy are both alive and well in 2017. The show also serves to breathe new life into the multi-cam format that hasn’t been widely popular in at least a decade.

The controversial real world issues One Day at a Time deals with include, in no particular order: mental health of veterans, workplace wage discrimination, deportation, sexual identity, divorce, widowhood and aging, the red tape of the veterans affairs bureau, cultural norms/religion and how to find your place within them.

Yet while all of that is presented realistically, exactly none of it is heavy or heavy-handed. There are no “very special episodes”, so much as all of these are very special. And very funny.

In one such instance, Schneider (Todd Grinnell), the landlord/handyman/trust fund brat gives a speech on how he’s an illegal immigrant… from Canada. His comments are immediately recognized as preposterous, and called out as such, in a room full of Cubans. That includes Lydia who came to America on her own as a child with Operation Peter Pan, a story that follows Schneider’s of having to live illegally in Malibu.

But even Lydia’s heartfelt story leaves room for barbs from her grandson. The three generations of the family illustrate the different viewpoints you’d find around any average dinner table in an interesting, heartfelt, and comedic way (which you might not find at the average dinner table), with the twist of Lydia having more in common with Penelope’s neanderthal bro-dude co-worker than with her own daughter.

Hollywood rightfully gets criticized for not being very diverse, and though shows like Ugly Betty and Jane the Virgin paved the way for One Day at a Time, the easy and authentic portrayal of a Hispanic family without it being A THING hasn’t lost its freshness. The family switches between Spanish and English without much thought.

Subtitles for the Spanish are not provided for viewers. This is easy enough to follow from context as a non-Spanish speaker, though I did have to ask friend what “bobo” meant. (It’s an endearing sort of put-down, meaning fool or clown, if you’re curious and monolingual, like I am.)

This is not a big show with big dramatic things happening. This is a small glimpse at the everyday life of a family, with witty banter and a beat/beat/joke format typical of sitcoms during the late 20th century. There’s a strong chance it will have echoes of your own family: the way they pick on awkward teenager Elena the first time she dares to wear makeup, the ridiculous affectations of the fantastic Rita Moreno as Lydia… if you’ve ever had siblings you’ve traded insults with or relatives you’ve rolled your eyes at, you’ll know how they feel.

The show can at times feel a little cheesy, but it’s the sort of cheesy you remember from shows of your youth and it’s easy enough to recall when your parent/sibling embarrassed you.

Justina Machado as war veteran, nurse, and mom Penelope carries the principle action beautifully. Penelope is warm and tough, figuring things out as a newly single mom, and Machado catches all of that nuance. She is… human. She talks a little too much, she gets frustrated with her kids. It’s a joy to watch her wear her various hats and to balance them so well.

Machado is not alone in how well she portrays her character. The cast is chock full of great actors and comedians who play well with the live audience. That includes the kids, who can often come across as precocious in TV, but don’t here.

In one episode, when prompted by the hold message of the VA, a phone on speaker mentions that men should be self-screening for testicular cancer. Rita Moreno’s Lydia says in her thick Cuban accent, flirting with Stephen Tobolowsky, “My husband asked me to check for him.” You can see her wait a beat for the crowd to die down before adding, “Daily.” The audience laughter swells again.

Not all the jokes in One Day at a Time are related to the heavier issues. And cheap laughs are appreciated too.

The show walks an impressive line of being both breezy and thought-provoking at the same time. With 13 episodes (each a half-hour) in the first season, and a renewal for season 2 already approved, it’s easy to spend an evening binging it all. It’s the best original Netflix show you can do that with right now.