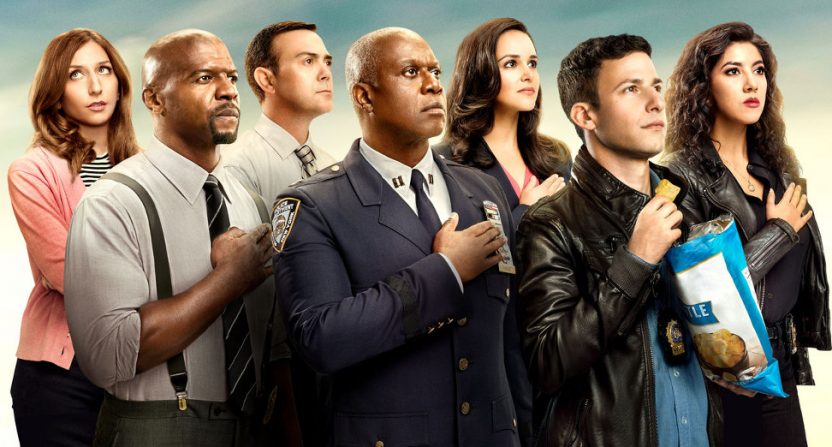 Thursday saw the news that Fox cancelled comedy Brooklyn Nine-Nine after five seasons, along with The Mick and The Last Man On Earth (after two and four seasons, respectively), and the Brooklyn Nine-Nine cancellation in particular sparked outrage from plenty of fans. While it could still be picked up by another network or a streaming service (and the amount of buzz around this has Hulu reportedly interested), for now it looks as though the show will be gone after its season finale May 20.

The cancellation has upset notable figures from Lin-Manuel Miranda to Mark Hamill to Sean Astin and Seth Meyers:

Here’s the thing about Brooklyn 99 being cancelled, I don’t want it to be. I love all of those people & they earned the right 2 have a final season victory lap where I could emotionally prepare. Don’t know them. Have nothing 2 do with the show. I’m just a fan who deserves better.

News on @Brooklyn99FOX and @LastManFOX is a double gut punch. Two great shows with hilarious writing and terrific ensembles.

Even the Backstreet Boys, a memorable focus in a recent episode, chimed in:

Thanks for the memories, #Brooklyn99 😢 pic.twitter.com/BnmwCdb9RS

It was many more than just the famous fans weighing in, though, as the show trended worldwide on Twitter in the wake of the cancellation news. And on some levels, this cancellation is quite unusual. While Brooklyn Nine-Nine was averaging a 1.2 in the 18-49 demo and 2.7 million viewers Sundays at 8:30, the lowest of the three cancelled shows, its numbers weren’t far below those others and certainly weren’t terrible by today’s scripted TV comedy standards. And the show and its actors received a ton of praise from critics, earned several Emmy nominations, and won a whole lot of other awards, from a Golden Globe through an American Comedy Award, two Critic’s Choice Awards and a GLAAD Media Award.

Brooklyn Nine-Nine was also the longest-running non-animated comedy or drama currently on Fox (The X-Files and Prison Break are older, but both took massive hiatuses before recent revivals). Plus,  it featured guest appearances from the likes of Marshawn Lynch, and it even received an after-after Super Bowl slot (following New Girl, also in its final season this year) back in 2014. So that’s a pretty significant show to cancel.

However, this might make more sense considering Fox’s acquisition of Thursday Night Football, as well as the planned sale of many Fox assets to Disney and the so-called “new Fox” that will be left. As of the fall 2017 schedule, Fox’s primetime lineup was 2.5 hours of programming on Sundays and two hours a night from Monday through Friday. With TNF, though, that takes away a whole night of primetime programming, so there was less room for Fox to put things. And they already have a significant list of renewals, including 9-1-1, Empire, Star and many more. They also seem to be shifting away from comedy with the cancellation of these three shows (plus, Ghosted and LA To Vegas are still both waiting on a verdict). And TV critics James Poniewozik and Myles McNutt made some good points about Fox’s plan here:

I lament the death of #BrooklynNineNine with all of you, but real talk: whatever the heck Fox is about to become has no use for niche comedies, and doubling down on multi-cams to broaden audience is the best survival strategy for its uncertain future.

What direction Fox takes after the corporate dust clears is a puzzle. It's tried taking a quasi-broad tack before (more procedural dramas, &c) but I dunno if there's the market for, like, a second CBS. https://t.co/0vjP637mS3

My best guess is it’ll basically be “Programming that the people who tune into NFL broadcasts will watch,” at least initially. https://t.co/KGsMbMfaCw

That seems like a good bet on the way Fox is going. And it further speaks to their strategy of focusing on sports. It’s also worth noting that while this particular decision wasn’t about Fox’s TV studio (Brooklyn Nine-Nine came from NBC Universal’s studios), the planned sale of their studio to Disney is going to make it even less worthwhile for Fox to run more niche scripted programming, as they won’t control the syndication/streaming/DVD rights for anything they air. So that’s yet more incentive to go broad and to emphasize shorter-shelf-life content like sports and reality/competition programming.