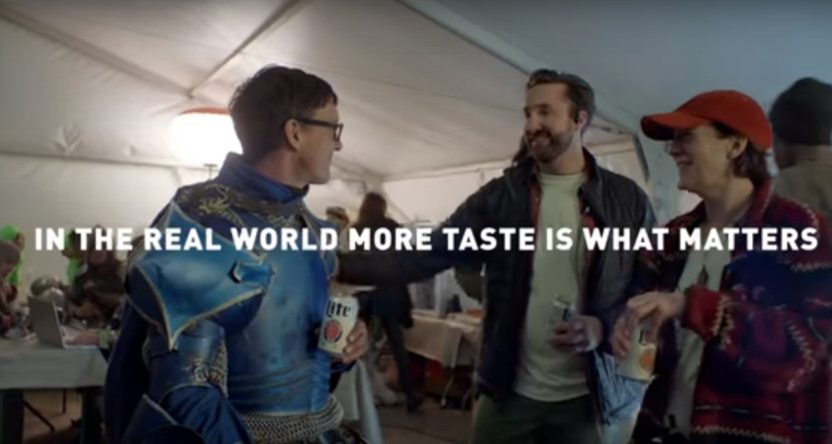 The beer commercial wars have continued, and in remarkable style. After the wave of Bud Light Super Bowl commercials mocking Miller Lite (and Coors Light) for using corn syrup (to the chagrin of the National Corn Growers Association), Miller Lite has fired back with their own ad. Unveiled during the first day of the NCAA Tournament proper Thursday, this ad picks up after the other Bud Light ad aired in Super Bowl LIII, their Game of Thrones crossover that saw the Bud Knight get murdered and a dragon wipe out the kingdom.

(If you can’t watch the video, it starts with fires burning and someone in what looks like the Bud Knight uniform lying on the ground, with cases of Bud Light nearby. Then a drone flies into the frame and the director yells “cut.” The knight removes his helmet, puts on his glasses and walks over to a tent with a beer fridge with both Bud Light and Miller Lite; he chooses the Miller Lite, the director and the other actors make the same choice, and the “In the real world, more taste is what matters” line pops up on screen.)

That feels pretty clever from Miller Lite, tapping into what was widely seen as one of the best Super Bowl commercials and not revealing until the end that it isn’t a sequel, but a competitor’s ad. And while there are some potential logical quibbles with it (why would a Bud Light commercial shoot stock Miller Lite in its fridge?), it’s funny and works. And Bud Light definitely escalated inter-brand shots previously with their corn syrup campaign, so a response feels justified. But a MillerCoors VP told Nat Ives of The Wall Street Journal this wasn’t fully a response to that:

But the latest spots are not really related to the corn syrup spat, according to Anup Shah, vice president for the Miller Family of Brands at MillerCoors. They continue a strategy since 2016 to argue that Miller Lite has more taste than Bud Light, he said, adding that they jump off from the “Dilly Dilly” campaign to draw a contrast between fantasy and real life.

“We’re using their campaign as a foil,” Mr. Shah said.

Meanwhile, Bud Light apparently got word of this and prepared their own ad in response, trying to shift the conversation back to corn syrup.

And while the Bud Light response ad was published to YouTube earlier Thursday than Miller’s, it’s winning in terms of views so far, with almost 1.7 million views as of 1:30 p.m. Eastern to Miller’s 23,000. We’ll see who fires the next salvo in the beer commercial wars. (And hey, if Miller Lite can revive The Bud Knight by breaking the fourth wall, maybe Bud Light can bring him back in universe? Resurrections do happen in Game of Thrones, and maybe this one will just come with some magic lager…)

2 thoughts on “New ad brings The Bud Knight back to life, and has him choose Miller Lite; Bud Light’s king fires back”