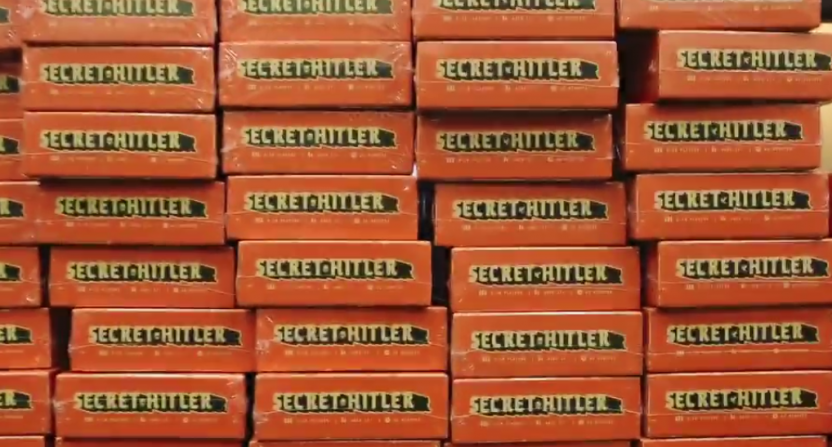 The people behind popular party game Cards Against Humanity have long been known for stunts, including crowdfunding the digging of a hole, selling literal bull crap, and failing to create a Super Bowl ad. Max Temkin, one of the co-creators of Cards Against Humanity, has now pulled off perhaps an even more ambitious and controversial game-related stunt/political message, sending a copy of the new negotiation/secret identity board/card game Secret Hitler (which he co-designed with Mike Boxleiter and Tommy Maranges) to every U.S. senator:

We sent a copy of Secret Hitler to every U.S. Senator: pic.twitter.com/38tMVfmP6a

It should be noted that this is a statement that goes well beyond just the game’s title, though, especially if you look at how the game actually plays. Secret Hitler is a social deduction game in the vein of other popular ones such as Werewolf and The Resistance. However, it’s very thematic in its take on Hitler’s rise to power in Germany during the early 1930s, and also very widely applicable in what it says about negotiation and compromise.

That illustrates the statement the Goat, Wolf and Cabbage publishing team is making in this letter to senators. “Although our game takes place in 1933 Germany, we thought you and your staff might find this game relevant as you negotiate the balance of power with the White House.”

The game, for 5-10 players, gives each a secret role of liberal, fascist or Hitler; with 7-10 players, the liberals don’t know who anyone is at the start of the game, and neither does Hitler, but the other fascists know both their teammates and Hitler. One player is picked to start as the president, and must nominate a chancellor, causing a table-wide vote. If that vote passes, the president then draws three policies and passes two to the chancellor, who must enact one. The policies can be either liberal or fascist, and the discarded ones aren’t revealed.

The liberal team wins if they enact five liberal policies or kill Hitler, while the fascist team wins if they enact six fascist policies. Interestingly, some of those fascist policies give the president powers, such as investigating someone’s loyalty or even executing a player, so it can even be to the liberals’ advantage to pass them at particular points. The fascists also win if they have Hitler elected as chancellor at any time after the third fascist policy is enacted, so there’s a lot of tension in those chancellor votes. (If the vote for chancellor is a tie or the nays win, the president role passes to the next player, who must then nominate a chancellor.)

Sending this game to senators is a political statement on the obvious level, as many Trump administration critics have compared the current political situation to 1930s Germany, but it’s also a statement on a deeper level if you look at the gameplay. One area where Secret Hitler has won a lot of praise from well-respected game reviewers, such as Dan Thurot and Raf Cordero, is for its focus on lies, uncertain allegiances, and difficulty balancing compromises. The liberals have to make tough choices between passing fascist laws for their executive powers (which is one way for them to win, if they can identify and then kill Hitler) and passing liberal laws for their other win condition, while the fascists can’t be too obvious about what they’re doing or risk putting targets on their backs.

As the letter writes, “To achieve his evil ends, Adolf Hitler required the cooperation of well-meaning men who hoped to appease and control the Nazis. Our game explores that relationship and highlights the difficulty of recognizing your own manipulation before it’s too late.” Thus, this isn’t simply comparing modern politics to Nazism (although it certainly seems to be trying to make that point too), but also asking senators to think deeply about their decisions on what to support and what to oppose, which doesn’t necessarily have to be linked to Hitler at all.

Directly referencing Hitler like this is controversial, but Temkin’s no stranger to controversy. Cards Against Humanity itself has often reveled in it, and has been described as “downright hurtful to board gaming’s progress” (by famed reviewer Paul Dean of Shut Up And Sit Down) for the way it can be seen as encouraging mockery of minorities, people with disabilities and more. And sending a copy of a game titled “Secret Hitler” to every senator at this point unquestionably makes a controversial statement just from the title, so it’s not like this is an apolitical move.

This also isn’t a particularly cheap move. Full copies of the game retail for $35, so sending it to 100 senators is giving out $3,500 in product, and there are shipping costs to think of. Of course, Goat, Wolf, and Cabbage will probably get that back in the extra hype they get from this move, and they do support people making their own copies from files on the game’s official site, so they’re willing to do some things that don’t directly contribute to their bottom line (something Cards Against Humanity has found great success with). This will certainly be a stunt that will get them some attention, and attention can be valuable.

It’s worth looking at this move as more than just the surface-level stunt, though, as beyond its subject matter, Secret Hitler is really an excellent game. For context, it has a 7.6 average rating on BoardGameGeek, and is ranked 360th overall out of the 89,000 items (including promos and expansions) in the site’s database. It’s highly-regarded for a reason, and it can be useful for anyone interested in studying compromise and negotiation. Temkin and his publishing partners may be performing a stunt and making a statement on one level, but this might actually be a useful game for senators (and anyone else) to play.

[Video and first image from Max Temkin on Twitter; second image from Raf Cordero on Board Game Geek]

3 thoughts on “Cards Against Humanity co-creator sends a copy of his Secret Hitler game to every U.S. senator”