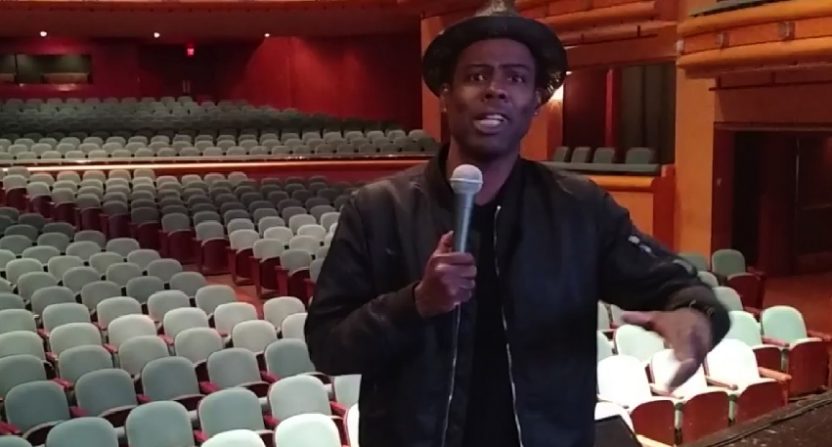 A 50-year-old comic is almost akin to being a running back on the wrong side of 30. You’re usually past your prime. Last weekend in Cincinnati, however, 52-year-old Chris Rock showed that he can still turn back the clock and score.

Rock is back on tour for the first time in nine years. The Total Blackout tour started last week and will run through early June. It’s an ambitious, back-to-the-fundamentals, grassroots approach for Rock, who TIME magazine once hailed as the funniest man in America when he was 35 years old. He doesn’t hold that title anymore. (Louis C.K. might be the heavyweight champion, but he should watch out. He’s 49. John Oliver [39], Amy Schumer [35] and Aziz Ansari [33] are coming for him).

Perhaps no comedian is better prepared for old age than Rock. After all, he has always been more of an astute social critic than a sheer jokester. With quick wit and a keen eye, he fearlessly observes and dissects topics of national importance. Last year, for example, as host of the Academy Awards, he took on the #Oscarssowhite controversy.

These days, he’s ready to opine on Trump, racism, police brutality, guns, the value of being bullied (?!), and religion, as well as lighter fare (relationships).

The world is a much different place than when Rock last toured in 2008. Back then, Barack Obama had just been elected. (Rock once famously joked that we would never see an African American president.) Now, Donald Trump occupies the Oval Office and is the antithesis of Obama.

Trump has dominated the news cycle in an unconventional way. When Rock opened the show in Cincinnati, he said he had just woken up from a two-hour nap. His first thought was: “Did anything happen? What?! He sold North Carolina?”

Rock then asked how many members of the audience participated in the Women’s March on Washington last month. After the applause, he asked: “Where were you on Election Day? Were you marching to Macy’s?”

Rock did not linger too long on politics. He did mention Trump to set up a bit about the problem with the anti-bullying movement. He joked that bullies are a necessary evil, so that children can learn how to resolve problems with “assholes” as adults. He pointed out that the softening of America has led to the current climate where no one seems to know how to deal with the biggest bully of them all right now (Trump).

If you’re pro-Trump, be annoyed if you want. But if you’re going to a Rock show, that’s on you. You have to know what to expect. He doesn’t play it safe. Never has. If you want someone tamer, Kevin Hart will probably be on tour again soon.

Despite the anxiousness of the times, Rock expressed optimism. He said: “The future is always better when you’re black,” hinting that African-Americans have already overcome much in this country.

The most poignant material from Rock was personal. He’s divorced from a 16-year marriage. When the news first broke of his separation from his wife a few years ago, it came as a shock. On stage, Rock acknowledged some personal failing, saying he “cheated” and “wasn’t a good husband.” He admitted to multiple affairs and said it wasn’t worth it personally and financially.

According to the New York Post, his wife sought a significant amount of alimony. It was reported that Rock was worth $70 million. The divorce was finalized last fall after an acrimonious battle of child support and custody over the couple’s two daughters.

Rock joked that fans shouldn’t be surprised if they see him appear on a couple of questionable television shows. (Rock was on an episode of Empire in 2015).

Single for the first time in almost two decades, Rock spoke about the differences between dating younger and older women. He said that millennials have sex and then immediately leave the residence. Rock said, “Wait. Where are you going? This is your home!”

There were moments when you couldn’t tell if Rock was serious or not. He said that he was on the dating app Tinder and that his profile picture was of him at the Oscars standing next to Leonardo DiCaprio. It sounds utterly ridiculous and completely plausible at the same time.

Speaking of technology, if you’re going to see Rock on this tour don’t expect to take a picture to post on Instagram or upload a video to YouTube. It’s a strictly smartphone-free zone. No cellphones, recording devices or cameras are allowed. How do they enforce this policy? With Yondr. Phones are placed in a pouch that can’t be unlocked until after the show or — in the case of an emergency — in the lobby.

So you won’t have a virtual keepsake of the return of Rock. On the flip side, you won’t have to worry about the distraction of people being on their phones. Sit back and enjoy one of the greatest stand-ups of all-time as he ages gracefully.

1 thought on “Back on tour, Chris Rock is still fearless and funny after all these years”