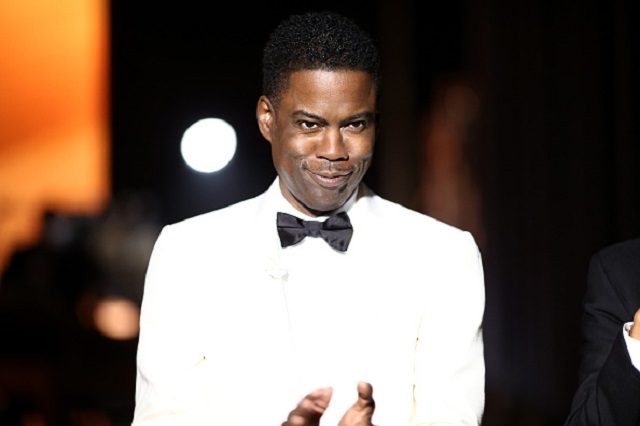 More anticipated at the 2016 Academy Awards than the Best Picture race between The Revenant, The Big Short and Spotlight was the opening monologue from host Chris Rock. One of our culture’s sharpest comedians (regardless of race) literally had the floor to himself to address the #OscarsSoWhite controversy surrounding this year’s ceremony and its troubling lack of diversity among the nominees.

What was Rock going to say? Was he going to skewer and shame Hollywood, laying waste to the industry from the stage of the Dolby Theater?

The comedian certainly wasted no time getting right to the topic at hand. After an opening montage of the past year in movies that seemed to highlight deserving films that weren’t nominated for the showcase awards like Straight Outta Compton, Creed, Beasts of No Nation, or even Star Wars: The Force Awakens, Rock pointed out the obvious, cracking “I counted at least 15 black people on that montage.”

If that was a jab, it landed right on the chin. Rock followed it up with a right cross, introducing the Academy Awards, “otherwise known as the White People’s Choice Awards.”

Cutting the fat off my monologue #oscars pic.twitter.com/ngMQD6LAkt

Rock’s barrage wasn’t just directed at the movie industry, however. The comedian also had something to say to those who thought he should boycott the Oscars and walk away from his hosting gig. But as our Michael Grant astutely asked in his Oscars preview, what would that have accomplished? Rock admitted that he considered quitting, but it’s not like that would make producers cancel the show. He joked about being replaced by Kevin Hart, but the point stood. It was far more important for Rock to be there and talk about why this year’s nominees had generated so much outrage.

Yet Rock also pointed out that the calls for protest were perhaps just a bit too serious, especially in regards to singling out this particular year. “It’s the 88th Academy Awards,” he said, “which means this whole no black nominees thing has happened at least 71 other times.” In past decades, black people had far more important issues to protest. “Too busy being raped and lynched to care about who won best cinematographer.” That one may have made the audience a bit uncomfortable.

But if Hollywood is guilty of anything, it’s living in a bubble and taking itself too seriously. This was Rock pointing that out. There are more urgent matters that warrant concern. Is this really what Spike Lee and Al Sharpton should be getting mad about?

The sharpest blow was saved for Jada Pinkett Smith, arguably the most outspoken critic of #OscarsSoWhite. “Jada boycotting the Oscars is like me boycotting Rhianna’s panties,” Rock said. “I wasn’t invited.” Even if she was speaking out on behalf of husband Will Smith, who didn’t get nominated for his role in Concussion, Rock called her out for taking herself a bit too seriously.

Rock didn’t let the movie industry off the hook, though. Yes, Hollywood is racist, he said. But it’s a subtle racism, or as Rock put it, “sorority racism.” It’s not that executives and producers don’t like black or ethnic people; it’s just that they don’t necessarily think people of color are right for their particular projects. And that results in black actors getting fewer chances at top roles, which is what really needs to change in Hollywood. Black actors such as Jamie Foxx and Halle Berry have won the top acting awards, but what opportunities do they get as a follow-up?

With that seemingly out of the way, Rock and the Oscars went about the business of the night. But Rock wasn’t quite done either, reminding the audience constantly about the Academy’s failure to recognize a more diverse group of nominees. Returning from one commercial break, he said “And we’re black!”

Rock frequently poked needles at Hollywood’s balloon of self-importance. This is the business of entertainment, and that business isn’t doing a good enough of job of reaching out and serving its audience, which Rock demonstrated with a bit in which he interviewed moviegoers at a theater in Compton.

Aw, Bridge of Spies is a good movie, you guys! Mark Rylance won Best Supporting Actor for his role in that film. But… yeah, maybe not a movie that a wide audience went to see this fall. Anyway, the people Rock talked to probably should have been presenters at this year’s Academy Awards — especially the woman who enjoyed By the Sea with Angelina Jolie and Brad Pitt.

However, Rock didn’t just wag his finger all night. He’s a comedian and his job was to entertain the audience. The biggest crowd-pleaser of the night was probably his recurring bit about raising money for his daughter’s Girl Scouts troop, a fatherly duty he wasn’t fulfilling because he was preparing to host the Oscars during Girl Scout Cookie season. Why not take advantage of a room full of wealthy people who surely don’t want to break kids’ hearts on national television? Buy some cookies!

Apparently, that gambit paid off nicely, as Rock announced the Girl Scouts had raised $65,000. Hopefully, there were enough Thin Mints and Caramel deLites to go around.

Not every joke typically works for a comedian on a given night. They can’t all be gems. Rock and the show’s writers had a couple of whiffs, notably a quick appearance by Stacey Dash, recently infamous for saying on Fox News that there shouldn’t be a Black History Month nor a BET network.

Were those remarks well known enough for the joke about Dash being named the Oscars’ new director of minority outreach to get a big laugh? It seemed to fall flat with the audience on hand and came across as awkward on television. Or maybe everyone watching couldn’t believe that Rock dared to make that joke.

The biggest misfire was probably a bit about the Pricewaterhouse Coopers accountants in charge of counting the Oscar ballots and tabulating the results. Bringing out three Asian kids named “Ming Zhu, Bao Ling and David Moskowitz” was an easy joke about Asians and Jews being good at math — as well as child labor, when Rock mentions those kids making our phones — that didn’t go over too well on social media.

WHAAAAAAAT was that joke with the Asian kids. #Oscars

Half-assed Asian joke, #Oscars, and then preach about diversity? #LoseMe

Think my brain shut down for a few minutes. Did that appalling joke about Asian kids actually happen? #Oscars

Rock knew that one was going to rankle some people and acknowledged it with that joke about tweeting on our phones. But if Rock is a great comedian for being unafraid to take on the decision-makers in Hollywood, his jokes also resonate because he’s willing to risk offending a part of the audience. That, along with being a stinging social critic, is what made him exactly the right host for this year’s Academy Awards. The ideal emcee for the show has to make fun of the audience in addition to celebrating the industry. Comedians are going to do that, not actors.

The Oscars truly lucked out by tabbing Rock as host. He was hired for the gig last October, long before the nominees and their lack of diversity were announced. But there couldn’t have been anyone better already in place when this controversy erupted. A replacement would have been put in a terribly awkward situation and might have been seen as placating critics, depending on who took over.

Rock had plenty of time to prepare and single out his targets. That showed in the opening monologue, which hit more sides of the issue than may have been expected. His comment about adding “black categories” seemed like an easy joke, until he compared it to the age-old ridiculous notion of separating men and women into different acting categories. “It’s not track and field. You don’t have to separate them. Robert DeNiro’s never said ‘I better slow this acting down so Meryl Streep can catch up.'”

We probably shouldn’t have expected any less from Rock, who was the perfect figure to place this entire discussion in its proper perspective and remind all of us where attention should be best paid.