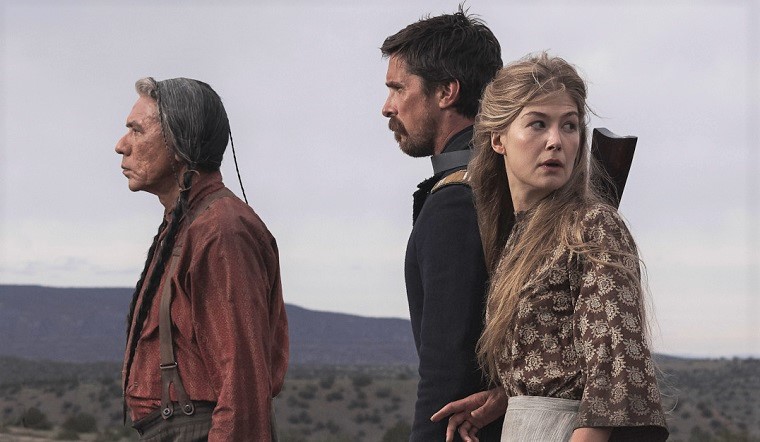 With Christian Bale starring and Scott Cooper directing, Hostiles wasn’t going to be a thrilling action figure glamorizing the American frontier and the brutal conflicts between Army soldiers and Native Americans.

This is something of a deconstruction or reexamination of the Western, an unflinching light shown on narratives that were once celebrated and mythologized. It’s a different, harsher angle than the one Clint Eastwood took with Unforgiven more than 25 years ago, though the themes are very similar.

Four films into his career as a director, Cooper has been inconsistent since debuting with Crazy Heart. That was ultimately a sad movie, though crowd-pleasing at many points, and Cooper has continued in a darker, more somber direction with his subsequent films. His Whitey Bulgur biopic, Black Mass, wasn’t quite the epic many were hoping for, but he may have hit closer to that target with Hostiles. While it’s not a great film, it may be Cooper’s best effort yet.

Here are some takeways from the film after viewing it:

You might feel bad about playing “Cowboys and Indians”

Maybe I’m showing my age here and many of you reading this didn’t play “Cowboys and Indians” or “Cops and Robbers” with toy guns (with caps that sounded like gunshots), holsters and badges when you were kids.

Video games weren’t quite a thing yet and our parents just wanted us out of the house. So when apartment managers and neighbors complained that my friends and I were running through yards and parking lots, firing toy guns and letting out Native American war cries, my mom and dad generally shrugged. Yeah, maybe we’d rather he play football, but he likes the guns. Boy, did things change as I got older.

Anyway, if you ever grew up thinking it was cool to play a cowboy killing an Indian (I’d like to think I became more progressive about this, thanks to the Lone Ranger and Tonto), Hostiles is here to make you feel guilty about that. Actually, Scott Cooper wants us all to feel guilty about how Native Americans were treated, their land taken away from them and their people slaughtered.

While it’s a worthy reminder for viewers, I wonder how many people watching this movie weren’t already aware of the atrocities that occurred on the frontier. But just in case, this movie demonstrates in sometimes graphic detail that there were no heroes, no noble warriors. There was just slaughter and death, and the burden of living with that takes a heavy toll on the soul.

Christian Bale is very good at what he does. Some actors are excellent at portraying angst and pain, so good that maybe you wonder if maybe they should try a comedy once in a while. (Jennifer Connelly comes to mind.) For Bale, maybe the closest we’ll get is him playing broader characters like Irving Rosenfeld in American Hustle or Michael Burry in The Big Short. Perhaps his Dick Cheney will be darkly funny.

Bale is really the perfect choice to play Captain Joe Blocker, a soldier in the U.S. Calvary whose reputation as an Indian killer precedes him. Blocker is the type who is so dedicated to his duty that he can’t think of anything else. The repercussions of his actions don’t occur to him. But the brutal treatment and killing of Indians has broken his best friend, Sgt. Metz (Rory Cochrane, whom I was convinced was Mark Duplass behind a massive beard until the end credits rolled), who can no longer live with what they’ve done.

Blocker is consumed with racist hatred toward Native Americans, unable to forgive them for the brutal murders he’s seen them commit — many of them involving his fellow soldiers and friends. So when he’s ordered to transport Chief Yellow Hawk (Wes Studi) from New Mexico to live out his last days on Cheyenne territory in Montana, Blocker initially refuses the assignment on principle. His colonel threatening his pension gets Blocker to follow orders.

Bale plays the stoic soldier well, but his face often betrays the anger that he’s suppressing. But as Blocker’s views change throughout the story, Bale’s expression softens. That hatred is replaced by sorrow, the burden he’s forced to shoulder becomes heavier as his mission progresses and the people around him are affected. It’s difficult to imagine any of his actor peers carrying this performance so convincingly. Maybe a Michael Fassbender or Joaquin Phoenix. Fortunately, we got Bale.

Based on his four movies, Cooper is a loyal filmmaker who likes to work with many of the same people on different projects. Bale starred in 2013’s Out of the Furnace. Jesse Plemons was in Cooper’s last film, Black Mass. And Cooper helped singer-songwriter Ryan Bingham become a star with the music for his first film, 2009’s Crazy Heart. (Bingham won a Best Original Song Oscar for “The Weary Kind.”)

Bingham recorded a new song for Hostiles, “How Shall a Sparrow Fly,” which he performs by campfire during a brief appearance in the film. It’s a risky move for Cooper, as Bingham singing risks taking viewers out of the film by recognizing the singer and his original song for the film. (It might remind some people of Ed Sheeran’s cameo appearance during Season 7 of Game of Thrones.)

The scene arguably doesn’t do much for the film, other than possibly persuade you to buy Bingham’s song. But it’s also a nice gesture to someone who provided such a crucial part of his first film. And if you’re a Bingham fan, you might enjoy seeing another recognizable face.

The men in Hostiles have endured many difficult times together, and the story we follow them in is approaching the end of their run. They’ve seen too much bloodshed, committing a whole lot of it themselves. (The one woman in the film, Rosamund Pike’s Rosalie Quaid, has lost everything, seeking both revenge and a reason to live.) For some, the cruelty has changed them, making them incapable of sympathy and turning them evil. Others know there’s no redemption for what they’ve done and can’t live with the spiritual cost this life has exacted.

But there’s also a loyalty and brotherhood among these men, something that’s revisited frequently throughout this film. If this is a final mission, at least they get to carry it out together. Or at least they should be. That some men get left behind, whether through death or injury, seems to hurt Blocker more than the violence he’s inflicted. Maybe that camaraderie is what helps him maintain some shred of humanity, while it’s been lost for some of his mates.

That’s not the stuff which makes for thrilling, exciting films, but it does create compelling characters and thoughtful examinations of this country’s history. A cast of talented actors portraying that inner (and outer) conflict — and some beautiful scenery of the great plains, shot by cinematographer Masanobu Takayanagi — makes it easier to follow such a story to its end.