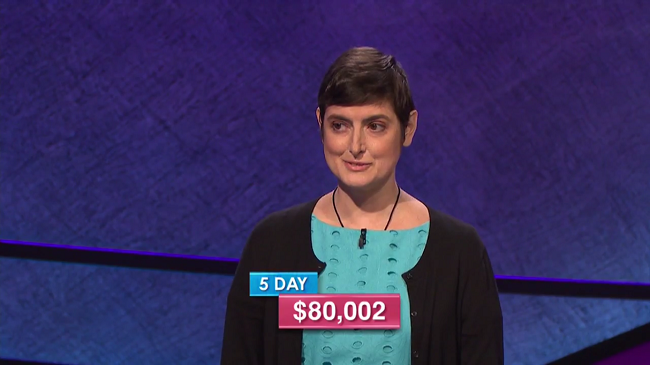 Cindy Stowell’s story is absolutely amazing. She’s the Jeopardy! champion who competed on the program while battling terminal cancer. She knew she might not live to see her own appearance, and that’s sadly what happened; she passed away on December 5th, less than two weeks before her appearances were scheduled to air.

What makes her story great isn’t just that she managed to compete on the program while fighting through a fever and an infection, as well as the effects of painkillers. (Granted, that’s certainly a big enough accomplishment.) What makes it truly great is that she won. And then she won again. And again, and again. Four times, she defeated fellow contestants who were unaware of her condition. In fact very few people knew what Stowell was going through during taping, only Alex Trebek and a few producers were aware.

Similarly, only a few people know just how long her run lasted; four-time champions are rare on their own, and as Cindy went for her fifth win, it looked like she might be in trouble. She was in the red after the first round, in fact. But she went on a run early in Double Jeopardy, racking up a true daily double early in the round. That helped her move into first place going into Final Jeopardy.

It was a dominant performance, but the game wasn’t a rout; her lead was not insurmountable at all, and both her competitors were in a great position to capitalize on a missed Final Jeopardy question. The category was Words with Multiple Meanings, and the clue was a difficult one:

Found in a 1970 Tom Wolfe book title, it’s a chemistry term, a math quantity, & a drastic word in politics.

Not easy! The two challengers both missed, but bet amounts small enough that Cindy was at risk had she not come up with the answer.

She nailed it. That’s five wins, which would have guaranteed her a spot in the next Tournament of Champions, were she still with us. It’s also $80,002 in winnings, all of which will be donated for cancer research. Of course, there are still more episodes to air. This is such an incredible, inspiring story. It’s sad, of course, but it’s also such a rare opportunity to watch someone live out a dream while knowing they don’t have much time left to live at all.

And Cindy Stowell is owning that opportunity.

You should be watching tomorrow, and hopefully for many days beyond that.