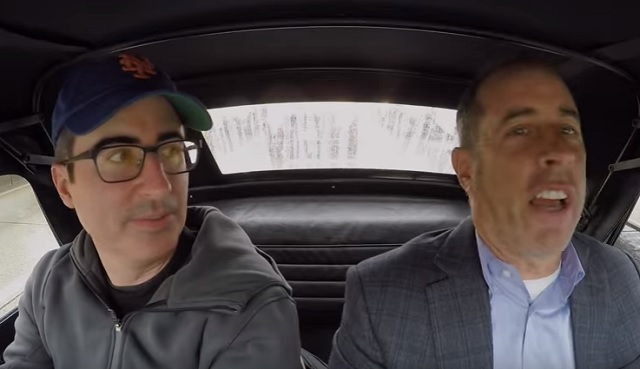 Streaming network Crackle is known for Jerry Seinfeld’s Comedians in Cars Getting Coffee. Well, was known, anyway; Senfield is taking the show to Netflix, as part of a massive new production and content deal.

The Hollywood Reporter and Variety both reported Tuesday (at exactly the same time) that Comedians in Cars Getting Coffee will air new episodes on Netflix in late 2017. This is part of a lucrative deal between Seinfeld and the streaming service that insiders estimate approaches $100 million.

Here are more specifics on the deal, via THR:

Under the pact, Seinfeld’s award-winning Crackle series Comedians in Cars Getting Coffee will move with new episodes to Netflix, with the comedian also set to film two new stand-up specials exclusively for the streamer. Seinfeld also will help develop scripted and unscripted programming for Netflix. Additional elements of the pact will be announced later.

New episodes of Comedians in Cars will move from Crackle to Netflix in late 2017, with the streamer also becoming the exclusive home to all 59 of the previous episodes of the series in which Seinfeld and his famous guests go for a ride-along interview. The deal calls for 24 new episodes of Comedians in Cars on Netflix, which will roll them out globally starting this year, with subsequent episodes in 2018 and beyond. The first of the stand-up specials, filmed specifically for Netflix, will bow later this year.

Seinfeld joins a number of famous comedians cashing in with Netflix, including the likes of Dave Chappelle, Chris Rock and Amy Schumer.

Obviously, Seinfeld is happy about this move:

“When I first started thinking about Comedians in Cars Getting Coffee, the entire Netflix business model consisted of mailing out DVDs in envelopes. I love that we are now joining together, both at very different points,” said Seinfeld. “I am also very excited to be working with Ted Sarandos at Netflix, a guy and a place that not only have the same enthusiasm for the art of stand up comedy as I do, but the most amazing technology platform to deliver it in a way that has never existed before. I am really quite charged up to be moving there.”

Likely not happy about the move? Crackle. There’s a certain amount of Sony cannibalism going on here, as noted by TV critic Alan Sepinwall:

Sony owns both Comedians in Cars and Crackle, and this deal for the former may end up killing the latter. https://t.co/MjR8SquH7m

As Variety noted, some of Seinfeld’s closest Sony allies had either left or been forced out over the past year, which likely helped precipitate this move. But it’s still surprising that a high-profile Sony property would bolt a Sony-owned platform.

Is it possible that everyone involved realized the ship was sinking, and this is just the end for Crackle? We certainly don’t know from the outside. But hey, has anyone heard anything about Crackle’s other high-ish profile program, Sports Jeopardy? We haven’t seen any new episodes in a while.

We’d ask the show via Twitter, but as they haven’t sent anything out since Dec. 5, we’re not hopeful for an update there, either.