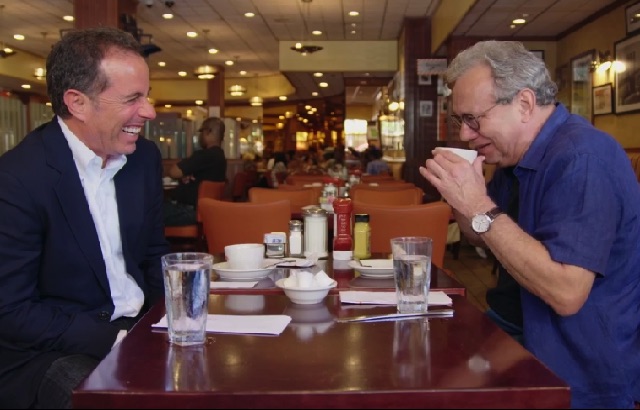 Put Lewis Black in a black Cadillac and he’s bound to scream at other drivers. There was plenty of that — and more — in this week’s Comedians in Cars Getting Coffee.

Black even goes as far as describing his act as “mildly psychotic.” At least he’s self-aware, because Black definitely lived up to that self-diagnosis in an odd, yet extremely entertaining, episode.

This week’s car, a 1967 all-black Cadillac Eldorado (“The world’s finest personal car”), looked pretty modern considering its age. I think it was an homage to Lewis Black, who is an older comedian with a new-age act. Instead of being stuck in the past, he even uses an iPad during his routine. Now, I don’t know if I’d go as far as describing him like Jerry Seinfeld described the car, “incomparable, unmatched, unexcelled,” but I do think Black, as a comedian, has aged like a fine wine. Plus, his laugh reminds me of Harvey Fierstein, so that’s not a bad thing.

When Seinfeld picks up his guest, he says Black is all ready for Florida, American Jewish aliyah. While he names a couple of possible destinations, I am slightly disappointed Seinfeld didn’t make a Del Boca Vista reference.

Lewis Black is known for his brand of angry comedy. During the first car ride, he makes it clear the anger is not an act. He loves yelling at other cars, even though he isn’t driving! “If you’re expressing road rage in the back of a vehicle, it’s time to wrap it up.” Seinfeld is proud of Black, who sounds like a native New Yorker, “Nobody from Maryland could say ‘suck on that’ with that eloquence.”

Afterward, I was reminded of the discussion about Rodney Dangerfield from a few weeks ago because Black argued “the nicer my clothing was, the calmer the audience” during his act.

There was also an interesting point about how conservative society used to censor comedy, but it’s now more of a liberal issue. Seinfeld definitely agrees because he now refuses to perform at colleges, though he is surprised Black believes this issue will go away over time.

It helps that Lewis Black is everyone’s funny relative. Even Seinfeld realizes it. “This guy is just funny. He’s like a talking fish.”

When they get out of the car, Seinfeld and Black notice a fried chicken stand that also sells plenty of unrelated non-fried chicken items. Black noticed a sign claiming the stand as 100 percent Halal, but he could not explain what that meant. “I got nothin’.”

When they go to a bakery and Black says he does not like the black-and-white cookie, Seinfeld is taken aback. He is well aware of his association with that cookie, acting almost insulted that Black did not immediately pick up on the Seinfeld reference. Granted, that scene’s bigger shock is that Seinfeld doesn’t even like black-and-white cookies!

By the time they sit down to eat, the episode is going strong. Black turns the table on Seinfeld, asking about his inspiration for the show. Based on the camera in the background of the shot, it seems like he asked it before everyone was completely set. Seinfeld’s response is great, explaining that he likes car conversations “and I don’t like anybody but comedians. If you’re not going for a joke, why are we talking?” Later, Black’s joke about a street corner in Houston with multiple Starbucks coffee shops was pretty funny, too. 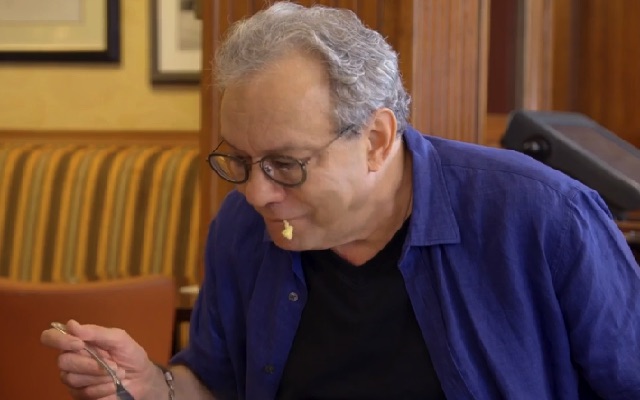 Afterward, the montage of Black’s awful eating habits is fantastic and well-edited. He followed it up with how his mother felt about grandkids. Her response of “I think you and your brother were enough. Your father and I, we don’t need to go through this again” is so humorously cruel. At the end of the meal, the “fight” over the check was funny.

Back in the car, there was more of Black yelling at other cars. He’s like a dog, sticking his head out the window, except instead of enjoying the wind, he barks… a lot.

But the silence that followed was kind of awkward. I feel like it would have been more successful as a cut-down montage of just him yelling. That could have gone after the second ad break and it would have been funnier than the out-of-context snippet of Black’s comedy routine.

Overall, while the episode ended in a less-than-stellar manner, the first 15 or so minutes were great. It’s disappointing to leave with a bitter taste after such a strong episode. I’ll definitely watch it again because Lewis Black was hilariously angry and angrily hilarious, but I’ll be skipping the episode’s final few minutes.