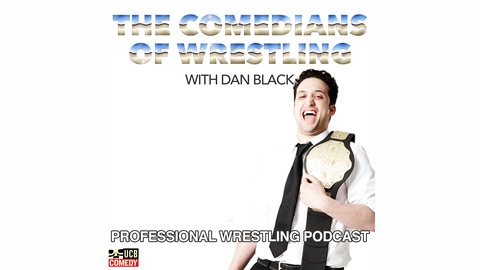 Podcast: The Comedians of Wrestling

What Is it?: A weekly (or so) podcast about WWE professional wrestling. Show recaps, discussions about characters, predictions, and a disturbingly large amount of discussion dedicated to what’s going on under Roman Reigns’s shirt.

Who’s The Host?: Dan Black, a sketch/improv comedian living in Los Angeles who is also a self-described “adult wrestling fan” who hosts a wrestling-themed comedy show at UCB Theatre.

What’s A Normal Episode Like?: Most episodes involve Dan and a guest, often a fellow comedian with a working knowledge of WWE, discussing the most recent shows or events and digging into their thoughts on pro wrestlers, gimmicks, storylines, and whatever else is in the news at that moment.

Who Is It For?: WWE fans who watch Raw and Smackdown and pay attention to what’s going on during the shows but also the notable storylines off-screen. This is a ground-level discussion of pro wrestling week to week so people who know who the current Intercontinental Champion is are much more to enjoy listening than those who don’t.

As a bonus, it’s also a great listen for self-aware wrestling fans. For those who watch the shows, enjoy them on a visceral level, but then also appreciate how ridiculous this all is. And if you’re a heterosexual male WWE fan who can admit they enjoy looking at another man’s well-defined abs, then you’ll find a safe space here as well.

Who Is It Not For?: Obviously, it’s not for anyone who isn’t interested in pro wrestling. But I’d also say it’s not for anyone looking for high-level intel regarding what’s going on backstage. Dan and his guests usually come at the discussion as if they’re sitting on the couch watching the show with you. It’s a couple of friends hanging out with beers, talking about guys in their underwear hugging one another. It’s not a discussion about the intricate inner workings of the industry or a deep-dive into behind the scenes news. If you’re looking for Dave Meltzer-type analysis, this isn’t your podcast. And if you don’t know who Dave Meltzer is, this REALLY isn’t your podcast.

How Many Episodes Are There?: The podcast started in November 2015 and there are 22 episodes to date. The recent schedule has settled into one/week but sometimes that changes depending on major events like Wrestlemania.

Can I Jump Right In?: Jumping right in is probably the best way to go. Because the episodes are almost always topical, they tend to focus on what’s just happened. So older episodes are focused on events and shows that have long since come and gone, cutting into how interesting you might find them now.

What’s Not Great?: Because it’s like listening to buddies sitting on the couch with a beer and talking wrasslin’, errors can slip by from time to time. So long as you go into the listen not expecting a serious journalistic experience, you can allow for that. Any episode that includes more than one guest also runs into the possibility of getting unwieldily. There can be moments of over-talking and indecipherable conversation. But these are nitpicks mostly.

Matt Mazany Returns! – Mostly because this is the most recent episode so if you’re looking to get started it only makes sense here. The well-timed recording took place just minutes after it was announced that Roman Reigns was suspended so expect a lot of talk on that topic. They also discuss Dean Ambrose’s shocking WWE Title victory at Money in the Bank and look forward to where the former members of The Shield go from here.

Jamie Lee and Stone Cold Steve Austin – In a departure from the usual setup, this episode brings on Dan’s girlfriend, comedian Jamie Lee, who is absolutely uninterested and somewhat disgusted by pro wrestling. Dan attempts to get her to appreciate the artform with the help of “Stone Cold Steve Austin,” portrayed by Daniel Van Kirk, whom fans of Sklarbro Country will know well. The first time you hear Van Kirk’s Stone Cold impression, you might not be sold, but stick with it. He’s extremely funny and is able to combine his own working knowledge of WWE with his comedic abilities to make for an enjoyable listen.

So, Should I Listen To This?: It all comes down to the aforementioned reasons noted above. Do you enjoy wrestling and want to hear a couple WWE fans talk WWE for about an hour without getting into the technical aspects of the industry? Then crack open a cold one and get to downloadin’. If you stopped watching pro wrestling when you were 19, then maybe it’s not. Or maybe, just maybe, this is your ticket back into the land of oiled-up muscle men in underwear throwing each other off of high places.

Previous Should I Listen To This? Reviews: The Flop House, The Jonah Keri Podcast, Alice Isn’t Dead