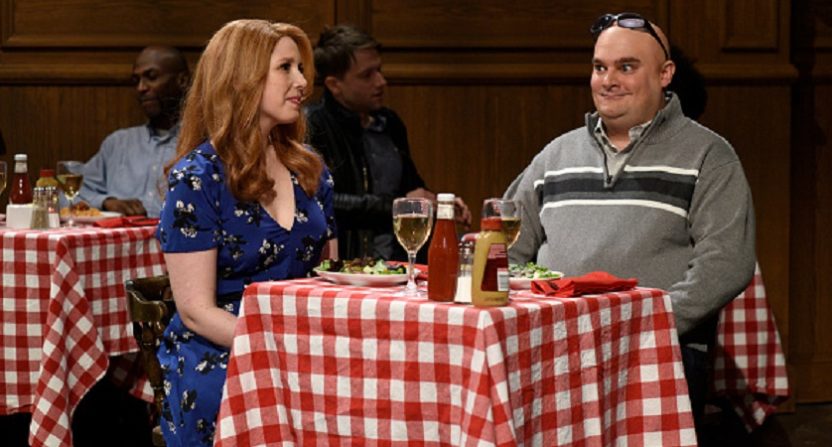 For the second straight season, Saturday Night Live will have at least three cast members moving on from the late-night sketch show. Unlike last season, when we didn’t learn about Taran Killam, Jay Pharoah, and Jon Rudnitsky being let go until August, fans knew of two departures before Saturday’s season finale, and the show quietly acknowledged them with extended airtime for both Bobby Moynihan and Vanessa Bayer.

In the hours after season 42 ended, with social media buzzing with rumors of another cast member exiting the show, it was confirmed that Sasheer Zamata was done at SNL as well.

Each cast member’s reasons for leaving may have been different, but Moynihan and Bayer left on their own accord from SNL. Zamata also seems to have made her own decision to split with SNL, but there may be more behind her departure than just finding a new gig.

Bobby Moynihan
Moynihan joined SNL in 2008, and while he never really had a big recurring sketch character (Kirby and Mark Payne are the closest he had), Moynihan really shined with his impression of New Jersey Governor Chris Christie, and his Weekend Update characters like Anthony Crispino, Riblet, and Drunk Uncle. Over his nine seasons at SNL, Moynihan was a steady performer who was always good for a laugh with a simple look or a handful of lines.

He’ll be starring in the CBS comedy Me, Myself and I this fall with John Larroquette and Sharon Lawrence. The show follows the life of Alex Riley through three periods of his life with Moynihan portraying the 40-year-old Riley. He’ll also be providing the voice of Louie in the Disney reboot of Ducktales which premieres this summer.

Vanessa Bayer
Similar to Moynihan, Bayer had a variety of Weekend Update characters (Jacob, Dawn Lazarus), but she also was one of the best sketch performers on the show during her seven seasons. She was often cast as the “straight man” in sketches, but consistently stole those sketches with her delivery. Moynihan may have been the bigger name to some, but Bayer will be a bigger loss for the show next season.

Bayer isn’t currently connected to any upcoming projects that would have necessitated her departure, but after co-starring turns in Office Christmas Party, Trainwreck, and The Polka King, she may be looking to open up her schedule for more movie roles.

Sasheer Zamata
After concerns were raised by the public, and some cast members, SNL undertook a search for a black female cast member and eventually cast Zamata, who joined the cast midway through the 39th season. Sadly, SNL never found a place for Zamata during her three and a half seasons, and while there were occasional glimmers of hope for her breakout, it never happened.

Zamata recently premiered a stand-up special, Pizza Mind, on Seeso, and is a celebrity ambassador for the ACLU’s Women’s Rights Project.

Clearly, three cast members leaving is a big deal, and will leave some pretty big shoes to fill for next season, but is the turnover done at SNL? Could anyone else be joining Moynihan, Bayer, and Zamata? Here’s a ranking of the remaining cast members from least likely to most likely to return next season:

Melissa Villasenor (first season)
Villasenor made history this season by becoming the first Latina cast member in the show’s history. Unfortunately, that didn’t lead to a lot of airtime for her, and she rarely was given an opportunity to show her comedic chops outside of peripheral characters and a handful of impressions when needed.

Pete Davidson (third season)
One of the youngest cast members ever when he was hired for SNL’s 40th season, Davidson has quickly become a fixture on Weekend Update. Earlier this season, Davidson was missing for a few episodes while he entered rehab for drug use. Now clean for the first time in eight years, Davidson may also need a change of scenery.

Kate McKinnon (sixth season)
It may be shocking to see McKinnon’s name this low, but this was supposed to be her season. Thanks to Donald Trump, though, we didn’t get to see McKinnon as President Hillary Clinton and with her star slightly diminished (she’s still the show’s best cast member), McKinnon may be looking to capitalize now on her scene-stealing turn last year in Ghostbusters and her upcoming co-starring role in Rough Night with Scarlett Johansson.

Kyle Mooney (fourth season)
Mooney is another veteran cast member who appears to have no reason to leave SNL, but there were moments this season where he rarely appeared in episodes while his Good Neighbor counterpart, Beck Bennett, has become one of the top performers on the show. Mooney also wrote and starred in Brigsby Bear, which premiered at Sundance this year and was acquired by Sony Pictures Classics for distribution.

Alex Moffat (first season)
Moffat may have helped himself secure a spot next season with respectable turns as Senator Al Franken and Anderson Cooper, but portraying Eric Trump as a complete doofus, and making it funny, was one of the highlights of last season.

Mikey Day (first season)
A writer at SNL since 2013, Day had no issues fitting in, and began appearing on a regular basis starting with the season premiere. He has appeared as Donald Trump Jr., and Paul Ryan, but his regular appearances as a “normal” guy should mean Day will be back next season.

Cecily Strong (fifth season)
Strong has become one of the most reliable cast members on SNL. She rarely breaks, and her willingness to be weird sets her apart from some of her other cast members. Moving her away from the Update desk three years ago was a great decision for the show because it gave them more time with one of the show’s best talents.

Leslie Jones (third season)
After spending two seasons mostly relegated to making sexual advances towards Colin Jost on Weekend Update, Jones had her best year since joining the cast. The awkwardness she displayed a season or two ago has been replaced with a confidence that radiates from the television when she appears. She may be one of the more divisive cast members with fans (and non-fans) on social media, but she’s also one of its best.

Kenan Thompson (14th season)
Next season, Thompson will break the record for longest-tenured cast member in the show’s history (he’s currently tied with Darrell Hammond), so we’ll probably have at least one more season of Kenan. At this point, Thompson will leave when he wants to and he’s earned that spot by consistently being funny in every sketch he appears in.

Beck Bennett (fourth season)
Bennett and Mooney’s paths at SNL seem to be going in different directions. With Taran Killam not returning this season, it was Bennett who filled in most of the roles traditionally held by Killam and he also added Vladimir Putin, Jake Tapper, and Mike Pence to his resume. He’s the kind of cast member SNL loves: he’s white, male, and has a face that can fit into multiple roles convincingly.

Aidy Bryant (fifth season)
Helping deflect the blow of Bayer’s departure will be Bryant, the current unsung hero of SNL. She doesn’t get the press like McKinnon, but Bryant is so good in every sketch she appears in that she can make a bad sketch OK and a good sketch great. Eventually, everyone will recognize her talent and that might be as soon as next season.

Michael Che and Colin Jost (third and fourth season respectively)
Che and Jost aren’t topping this list because Weekend Update is the best thing on SNL, because it’s not, but because they already have gigs with SNL before next season starts. In August, Weekend Update: Thursday will premiere, and hopefully the extra time will let Che and Jost work on some of the issues that dragged down Update at times this season.