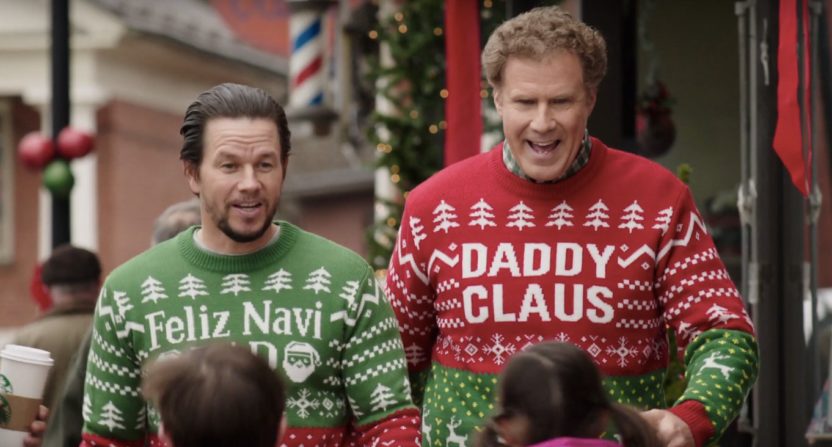 Who would’ve guessed that Will Ferrell and Mark Wahlberg would make one of the best on-screen comedy teams of the past decade? (Although pairing Ferrell with virtually anybody would probably work.) Daddy’s Home was a successful comedy two years ago, tripling its budget at the box office, pulling people in right away with a great premise. What would be more intimidating than to be married to a woman who used to be with Mark Wahlberg and his bulging biceps? How could anyone possibly be a cool stepfather compared to the badass real dad?

But that conceit probably only works for one movie, especially when Daddy’s Home ended the way it did. Could it successfully be stretched into a second movie or do the comedic stakes have to be raised? Of course they do. We’re talking about a sequel. The record for comedy sequels isn’t very good. However, making fun of family dynamics — especially around the holidays — provides a deep mine of material. Writer-director Sean Anders (who also helmed the first movie) at least created the right setting for a sequel, giving himself plenty to work with.

Did he pull it off successfully? Here’s what worked and what didn’t in Daddy’s Home 2:

The funniest part is in the trailer

The frequent fear with movie comedies is that the best jokes are given away in the trailer. It’s a tough call for movie studios and trailer editors. You want to attract the audience with a good gag that entices them to see the rest of the movie. But what if the movie doesn’t actually have that many funny scenes that fit well into a trailer?

Daddy’s Home 2 is really only based on one joke and had to reveal the scene which establishes that gag in the trailer because that’s how the script laid it out. What kind of father did Mark Wahlberg’s brutish bad boy Dusty Mayron have? Oh, he must have been a real hard-ass. And he’s played by Mel Gibson! What about Will Ferrell’s kinder, less macho Brad Whitaker? His dad was a softie, played by the gentle John Lithgow.

Good casting, and the scene in which the older fathers are introduced depends on the reveal of Gibson and Lithgow. There’s really no other scene in the movie that provides the same short-hand punch. Along with the musical cues given to each of the very different fathers, it’s a great scene for a trailer. Unfortunately, it’s probably also the best scene in the movie.

As mentioned, Gibson was a savvy bit of casting and believably portrays a hard-ass womanizer whose life and career achievements often made his son feel inferior. Why was Dusty such a jerk? Because his father didn’t show him any love and cared more about scoring with somebody’s mother, aunt or sister than showing him any attention. It’s a decent backstory, especially with someone like Gibson who seems like he’d have a reasonable chance against Wahlberg in a scrap — or is at least crazy enough to think he has a shot.

But Gibson is still in the midst of career rehab. Would he be taking a part like this if he wasn’t? (Maybe, and if he’s that willing to go in for a gag, that’s kind of appealing. We know he can be funny from the Lethal Weapon movies.)

However, the memories of the anger, misogyny and racism that put him in Hollywood jail and effectively killed an enormously successful acting career haven’t been forgotten. It hasn’t even been 10 years since tapes of him verbally abusing his girlfriend became public. (Gibson still has some play as a director, a role in which he’s been very impressive. Perhaps he’s less upsetting behind the camera. He received an Academy Award nomination for directing Hacksaw Ridge and Warner Brothers reportedly wanted him to helm Suicide Squad 2.)

There’s nothing in Daddy’s Home 2 that might remind you of that, but there’s something to be said for casting Gibson as someone who’s supposed to be unlikable and then remembering why he seems to play unlikable so well. Watching him be a bully to the other characters makes the movie a little bit uncomfortable.

Nostalgia is a hell of a thing, man

I’m as big a sucker for 1980s nostalgia as anyone. I probably give too easy a pass if a movie or TV show references something I loved when I was much younger.

Daddy’s Home 2 hit me in the soft underbelly with a subplot that involves the charity supergroup Band-Aid, the song “Do They Know It’s Christmas,” and arguably the most memorable part of the song belted out by U2’s Bono. I love that song. It’s one of three or four Christmas songs that actually get me in the holiday spirit and I feel deprived if I haven’t heard it. (That’s not really a problem nowadays when I can call it up on YouTube any time I want.)

The song also figures prominently in the final moments of the movie. Like virtually every other gag in the film, the “Do They Know It’s Christmas” joke is taken a bit too far, resulting in a fuzzy moment that’s supposed to bring everyone together. But if that song means nothing to you — either because you’re too old, too young or (gasp!) don’t like the song — there’s really no hook to make those scenes resonate. Although maybe you’ll be objective enough to see that it’s probably just a goopy song used for a nostalgia play and an easy reference. That doesn’t seem likely, however, since “Do They Know It’s Christmas” is such a good song.

Ferrell and Wahlberg make a good comedy team, which they’ve shown with The Other Guys and Daddy’s Home. If you liked that first not-so-family-friendly comedy, it was probably because of the strange interplay between the intense Wahlberg and goofy Ferrell. Something about that pairing works. But there’s not enough of it here because of all the other characters included in the script. And it’s not just Gibson and Lithgow (or John Cena, who expands his cameo from the first movie). Everyone gets a subplot or character arc here, even the kids. Maybe that makes for even-handed storytelling, but it deprives viewers of what they most likely came to see.

But Daddy’s Home 2 did make me laugh, so I’m going to be less hard on it than most other critics have been. I wish I’d have laughed more, though. I’ll also admit that getting older and having a different outlook on family and children than I used to might make me an easier sell than I might have been even five years ago. Yet a lot of the humor here is too mean-spirited, making too much fun of being sensitive and nice. There’s also an unfortunate gay joke toward the very end that felt totally unnecessary. Maybe I’m just too sensitive and nice. Dusty’s dad probably wouldn’t approve.