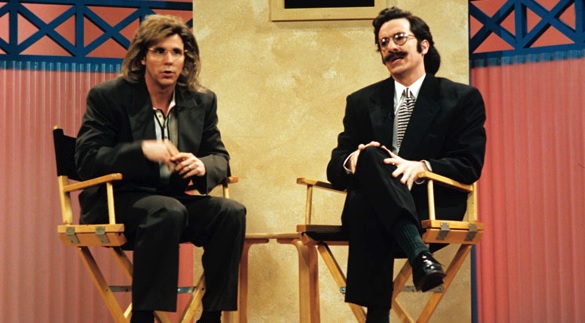 Plenty of not-ready-for-primetime players have left Saturday Night Live with expectations of becoming solid showbiz successes. It’s the rare talent who leaves the late-night, star-making show with the expectations of becoming a surefire sensation. The few who come to mind that followed through on that promise include Chevy Chase, Bill Murray, Eddie Murphy, and Will Ferrell.

Another name that comes to mind is Dana Carvey, who spent eight seasons on SNL creating some of the most iconic impressions and characters in its history (The Church Lady, Wayne’s World’s Garth, George H. W. Bush, and the Hans in Hans and Franz. to name a few). When he left in 1993, the comedian seemed primed for huge things. The only question was what would he pursue? Go after more film success following the Wayne’s World movie or settle into a well-deserved career as a sitcom star? After a few false starts with movies that didn’t go anywhere (Wayne’s World 2, Clean Slate), he decided to go in a third direction, pursuing a sketch comedy show all his own.

Along with SNL writer Robert Smigel (Triumph the Insult Comic Dog), the duo set out to remake sketch comedy in America. In a bit of foresight over the future of television, Carvey initially wanted to take things to HBO where they’d have free reign. However, he and Smigel eventually decided to take their talents to ABC where they were given a cushy timeslot at 9:30 on Thursday nights following Home Improvement, the number one show on TV.

The show received a 10-episode order and was left relatively to their own devices to create the kind of sketches they wanted. They compiled a writer’s room and talent pool full of comedians and artists who would come to dominate the comedy and entertainment landscape over the next few decades. All of the pieces came together for The Dana Carvey Show to be a smash success.

So how in the world did the show do so poorly that it was effectively canceled after airing just seven episodes?

That’s the question at the heart of Too Funny to Fail, a Hulu documentary which charts the presumptive rise and epic fall of The Dana Carvey Show. The straightforward film tells the story the best way possible, through sit-down interviews with the people involved, which includes Carvey and Smigel as well as castmembers Steve Carell, Stephen Colbert, Heather Morgan, Bill Chott, and some of the writing talents involved.

The documentary takes a straightforward approach, letting those involved do the talking. It holds our hand as we see how the show came together and Smigel assembled a writing staff that included Louis C.K. (Louie), Charlie Kaufman (Being John Malkovich, Adaptation), Jon Glaser (Late Night with Conan O’Brien), Dino Stamatopoulos (Mr. Show, Moral Orel), Spike Feresten (Seinfeld, Late Show with David Letterman), and Robert Carlock (30 Rock, The Adventures of Kimmy Schmidt). We also learn how they recruited two unknown Second City performers, Carell and Colbert, to be the backbone of the cast in a stroke of unrealized genius.

Perhaps the lesson learned from the documentary is that they actually did make a pretty good, if flawed, sketch show. They were simply a victim of hubris mixed with an ill-advised timeslot and the unfortunate misunderstandings that came out of being on a network purchased by Disney. Whereas ownership and executives were looking for Carvey to break out his greatest hits in order to bridge the gap between family sitcom Home Improvement and cop drama NYPD Blue, Carvey and Smigel wanted to take an absurdist route more akin to Monty Python.

It’s not hard to see where it all went wrong (a scene where those involved watch an ABC promo that combines a “very special” Home Improvement episode with their silly show is particularly hysterical).

The documentary doesn’t go too hard on the show or cast and crew, though it does take a moment to highlight some poor choices by the mostly-white people involved when depicting race. A lot of attention is paid to the first-ever sketch the show produced, an infamous scene where Carvey, as President Bill Clinton, unbuttons his shirt to reveal a chest full of teets for a parade of babies and puppies to suckle on. While it certainly hit the absurdist notes they were going for, it ended up being the wrong introduction to their lead-in audience, which bailed in the millions with every passing minute.

One notable area the documentary doesn’t delve into, but is impossible not to notice with 2017 eyes, is the boys club mentality of the show. It’s perhaps no surprise to learn that this 1996 primetime sketch show featured an all-male writer’s room, as well as a cast with just one female actor. Like so many sketch shows of the era (SNL, In Living Color), it was often the case that scenes were male-centric with women filling in the wife/girlfriend/mother role. So while there’s a lot of talk about how ahead of its time The Dana Carvey Show was for some of their material, it was also still very much of its time in other ways.

Still, the doc is a fun watch that provides great insight into what can go wrong even when all the pieces seem so right together. It also reminds you that this show which lasted all of seven episodes over the span of two months is one of the essential building blocks for large swaths of the American comedic landscape to come. Without it, perhaps Steve Carell never becomes The Office’s Michael Scott, Stephen Colbert never becomes “Stephen Colbert,” Dino Stamatopoulos never helps create Mr. Show, which in turn launches so many other comedy careers, and so on.

As for Carvey, his star never shone quite as bright again. Perhaps that’s how it was supposed to go for him, a comedian and impersonator from a very specific era. He found success on the stand-up circuit and still pops up from time to time to rounds of applause, but the work he did on SNL is what he’ll always be remembered for most fondly. As for The Dana Carvey Show, it was extremely influential, just not in the way he’d hoped back in 1996.

However you remember it, the fact that the show gave us the “Waiters Who Are Nauseated By Food” sketch made it all worth it.