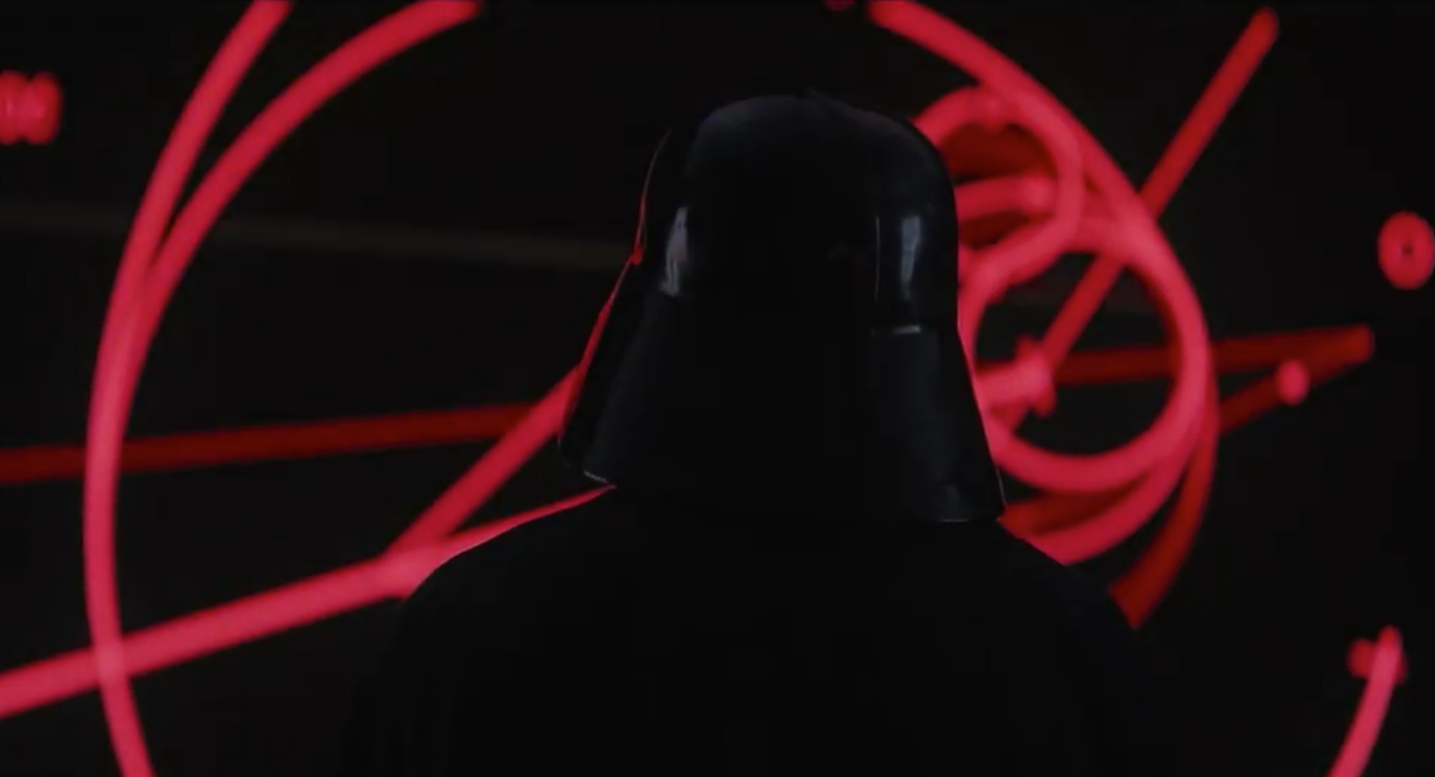 It has been a few months since our last official look at the upcoming side adventure in the Star Wars saga, but Star Wars fans were treated for their patience during Thursday night’s Olympic coverage on NBC with the second official trailer for Rogue One: A Star Wars Story. It welcomed back a very familiar character.

Darth Vader makes his return to the big screen this December in Rogue One, as confirmed by the closing shot in the new trailer. While we still are left wondering just how big of a role the father of Luke Skywalker and Princess Leia will hold in the story of Rogue One, just his presence alone makes this feel even more like an official Star Wars movie. It is worth noting James Earl Jones is credited in the cast for the film, which we knew going in. But seeing is believing.

Given the general plot to the movie, with the rebels planning and executing their plan to steal the plans to the Death Star, many fans felt not having Darth Vader in the film would be nearly impossible. But he’s in it now, and the trailer shows even more reasons to be excited about the upcoming film.

It was just a brief glimpse, but it will be enough to drive every Star Wars fan crazy for the next 24 hours. The signature breath at the end while looking at the back of Vader’s helmet is enough to send chills down your spine. It’s real, and it seems spectacular. The only question is whether or not Darth Vader plays a primary role as the leader of the empire or if he is taking on more of a side character story similar to Jared Leto’s Joker in Suicide Squad. 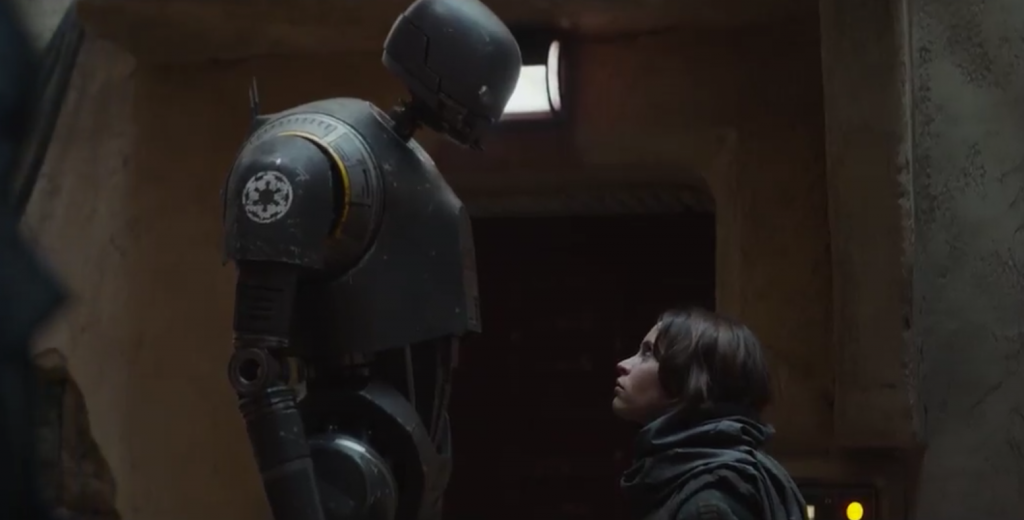 This appears to be our newest droid friend, K-2SO (voiced by Alan Tudyk). He is this movie’s C3-PO. He even has a moment in the trailer where he cites the odds of success (or failure) to our heros, making me wish we had Harrison Ford around to say “Never tell me the odds.”

3. The cinematography is gorgeous

This is supposed to be more like a war film than a Star Wars film, and judging by the shots shown so far through two separate trailers, Disney is delivering on that promise. This is going to be a Star Wars movie focused on a different angle, and they seem to be nailing it so far. Better yet, they are still managing to make it feel like a Star Wars movie. It seems like a solid blend.

4. We still haven’t heard a word from Ben Mendelsohn yet 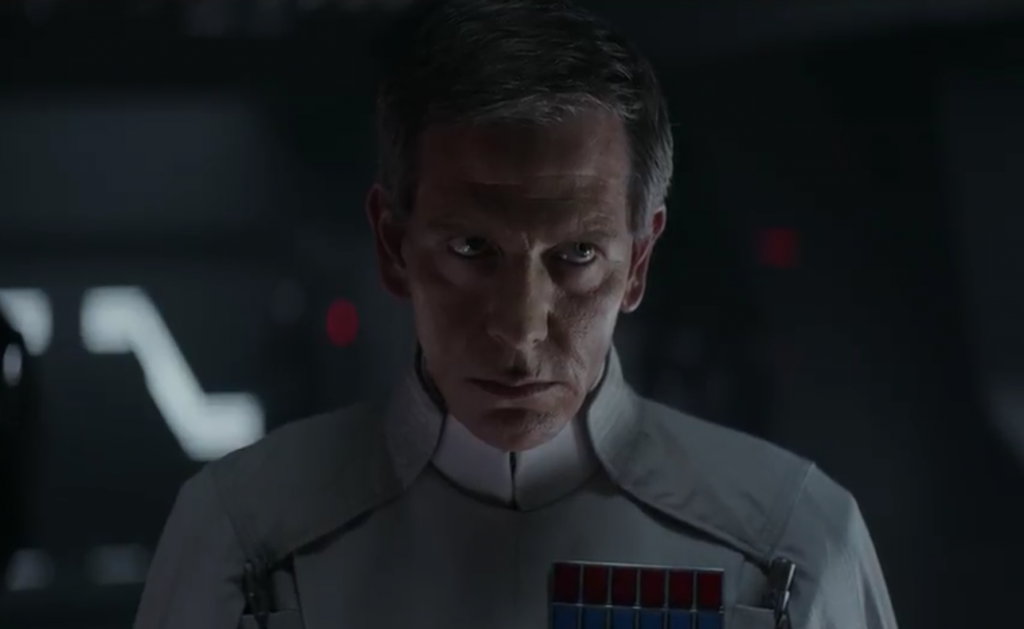 Two trailers have been released and not a single peep out of him. What’s his deal, other than being an Imperial officer? Silence is mysterious. Could he be thinking about his dead sister and how his relationship with his family turned sour? Wait, that’s his Netflix show, Bloodline. Sorry about that.

Every Star Wars movie has had a signature soundtrack composed by the one and only John Williams. While Williams is staying on board to score the main Star Wars films, Rogue One will have its soundtrack composed by Alexandre Desplat. Of course, with Star Wars already having such an iconic sound, it is up to Desplat to provide Rogue One with its own unique sound while also establishing its own sound. So far, so good. The musical tones you expect from a Star Wars movie are solidly in place with the chords you know go with a Star Wars movie. The mood is being set quite nicely as well while managing to both create its own voice and stick to basics where needed.

Taking place between Episodes III and Episodes IV, Rogue One: A Star Wars Story fills in the gaps between the finale of the second trilogy in the Star Wars universe and the first chapter in the original trilogy, focusing not so much on the Skywalker family but instead taking a deeper look into the efforts of the rebellion against the galactic empire. A new cast of characters along with a few familiar ones to Star Wars diehards fill the main cast, but there will surely be some references to characters we may be more familiar with.

Rogue One: A Star Wars Story is scheduled for a release of December 16, 2016.