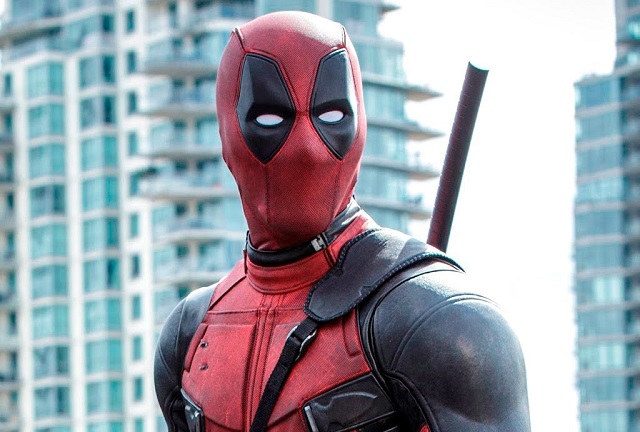 Deadpool shows the audience right away that it’s not like most superhero movies. That’s exactly what fans will love about it. It’s why the character has been so popular in Marvel Comics over the past 20 years, whether you’ve heard of him or not.

This isn’t a guy who follows the rules, either in terms of story or genre. He’s presumably a superhero, suited up in a red-and-black costume with full face mask. (Damn, the movie gets that costume right. It’s one of the best adaptations from page to screen ever seen.) But he kills people. And not with the grim countenance of some dark, joyless avenging angel, but with the ruthlessness and delight of someone who enjoys dispatching bad guys and happens to be abnormally good at what he does.

The writers and illustrators responsible for Deadpool’s stories haven’t followed the rules either. His anatomy (especially as rendered by Rob Liefeld, who created the character) is often exaggerated as only a comic book character’s can be. The violence on the page has been gruesome and bloody, yet with a pop sheen that parodies the four-color “Pow!” “Zap!” action of the medium.

Perhaps most importantly, Deadpool has been popular because he refuses to live only within the borders of the comic book panel. He talks to the audience, kicking down that fourth wall like Kool-Aid Man, sharing his joy with readers and including them in the joke. He’s endlessly meta, commenting on comic book storytelling tropes while also taking part in them, narrating his own action.

This is the approach and tone that screenwriters Rhett Reese and Paul Wernick (Zombieland), along with director Tim Miller, get exactly right. Within seconds, Deadpool makes it clear that it’s unlike any movie you’ve seen recently. 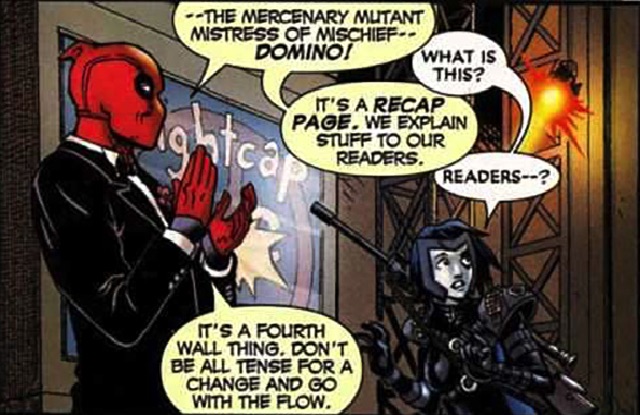 The opening credits sequence drops us right in the middle of an action scene that’s been paused, navigating the camera through an overturned SUV in which some extreme violence was already taking place. And rather than provide the actual names of the cast and crew, the credits list each role by the function they play in the story and production, poking fun at action movie genre standards.

Reese and Wernick also rip apart the typical superhero movie formula of telling the character’s origin story in chronological order. The movie begins with Deadpool already established, causing total chaos and inflicting maximum damage on his adversaries. But we do still see how this anti-superhero came to be through flashbacks.

Wade Wilson (Ryan Reynolds) was already a man with shady ethics and questionable principles, a former Special Forces operative now making a slight living as a seemingly affordable mercenary. Then he meets Vanessa (Morena Baccarin), the woman who gets him like no one else ever has. OK, she’s a prostitute, but given where Wilson typically hangs out (a dive bar populated by fellow soldiers of fortune), finding the right person at a dog park or a set-up through friends wasn’t going to happen.

Living a quiet (OK, rowdy, sex-filled) life of twisted domesticity isn’t meant to be, however. Wilson discovers that he has cancer, which has aggressively spread throughout his body. Wanting to spare Vanessa the ordeal of being a caretaker and watching him die, Wilson bolts and takes a strange opportunity presented to him: to submit to an experimental procedure he’s told will cure his cancer and give him extraordinary abilities.

Of course, if it was that clean and simple, we wouldn’t have much of a movie, right? The procedure is essentially torture, with Wilson put through enormous suffering intended to push his body to its limits and trigger a latent mutant gene for survival. The presumed objective is to make Wilson into a super-soldier, much like the program fellow mutant Wolverine endured before he caught on with the X-Men. (That’s not said outright, though Wolverine is hilariously referenced at least twice during the film.)

What if he doesn’t have that mutant gene? Too bad, so sad. The man who runs this “workshop,” Ajax (Ed Skrein), makes it clear that Wilson is totally expendable. He’s nothing more than an experiment alongside several other test subjects that might pay off. One who has, Angel Dust (Gina Carano), has superhuman strength as a result.

But Wilson’s frequent chatter and insults hit a nerve with Ajax, provoking him to take that torture to extreme limits. That finally triggers Wilson’s mutant gene and also provides the opportunity for him to escape. However, those gifts (which include enhanced strength and agility, along with the ability to completely heal from serious injury) have come with a price. The metamorphosis leaves Wilson completely scarred, rendering him hideous to look at (or as hideous as Reynolds can look with some skin graft-type makeup on) and compelling him to go into seclusion.

From there, Deadpool becomes a revenge tale as Wilson (with his adopted superhero moniker and a costume that evolves through several versions) hunts down Ajax, determined to inflict some punishment of his own and make his nemesis reverse the process that caused his disfigurement.

What makes Deadpool’s quest for vengeance especially fun is that he doesn’t take the journey alone. Demonstrating that the character exists in the same universe as the X-Men, two members of the superhero group first attempt to stop Deadpool as he wreaks havoc on a freeway (in an unknown city, but presumably New York), then eventually join him to stop Ajax from doing… well, whatever it is he and the organization he works for intends to do. That’s never made exactly clear, but it also doesn’t really matter in terms of the story.

We’ve seen the metallic brute Colossus in previous X-Men films played by a different actor (Daniel Cudmore) and with a leaner, more streamlined look. Here, he’s a cartoonishly large figure, almost as big as The Hulk. (Some might take issue with how the digital effects look at times. But how exactly is a giant man made of steel supposed to look, realistically?) Best of all, he’s true to his comic book roots, speaking with a Russian accent (voiced by Stefan Kapicic). 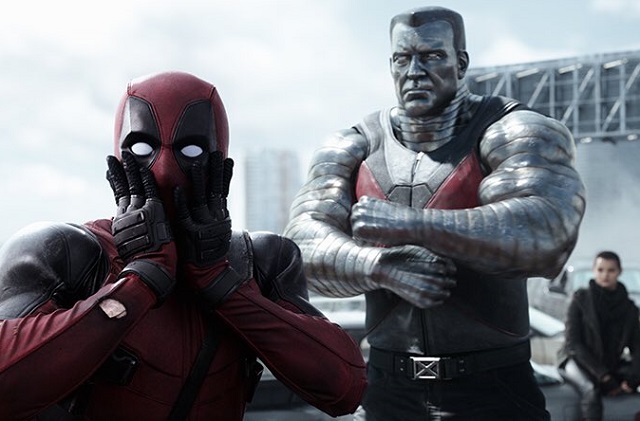 Accompanying Colossus is Negasonic Teenage Warhead (Brianna Hildebrand) — which might be the best superhero name ever — a surly teen with explosive powers, not easily impressed by much who tweets on her smartphone before jumping into the action. (Thankfully, she takes no selfies while fighting the bad guys.) These are the X-Men left to mop-up duty, while Wolverine, Storm, Cyclops and Jean Grey are apparently attending to more important matters. Or, as Deadpool points out, we get them because the studio couldn’t afford the more well-known X-Men.

Again, there are no rules here, no exposition that explains how everything works and fits in this world. The X-Men know Deadpool exists and have tried to recruit him to join the team. (Colossus attempts to appeal to his heroic nature, notably in a funny speech about doing the right thing, helping mankind and blah blah blah.) When Deadpool needs some help, he drops by Xavier’s School for Gifted Youngsters and asks if the mutant superheroes can come out to play. It’s just like a comic book. Special guest stars appear, a shared universe is understood. Now let’s get to the action.

But it wouldn’t be Deadpool if there weren’t plenty of jokes along the way. The script is full of winks and nods — perhaps most amusingly to Reynolds’ past superhero endeavors, notably the wholly unfaithful version of the character in X-Men Origins: Wolverine and the misguided CGI suit he wore in Green Lantern — showing us that this story just isn’t meant to be taken that seriously. Or at least not as seriously as Marvel’s Avengers films, Fox’s X-Men movies, and what DC Entertainment has in store with Superman and Batman. Deadpool is fun. Even if you never read the comic books or even don’t much care for superhero movies, the lighter tone and gratuitious violence that exploits the movie’s “R” rating makes this two extremely enjoyable hours at the movies.

For Reynolds, playing Deadpool is affirmation. It’s a property he’s tried to get developed for 10 years, knowing that the wise-cracking character was perfectly suited to his comedic talents and physical gifts. If there was any question as to whether or not he could carry a film after so many failed attempts to make him a star, this movie takes care of such concerns. The script is clever, Miller’s direction is competent (and sometimes bold), and the supporting cast is wonderful (especially T.J. Miller), but Reynolds is the guy who gives Deadpool its energy. No one else could seemingly play this role and do justice to the “Merc with a Mouth” that many comic book fans have fallen in love with. This is a triumphant moment for an actor who’s done damn good work for years.

Deadpool is also a triumphant moment for comic book movies, refusing to follow a now-familiar formula of complicated mythologies, shared universes, origin stories and hero’s journeys. No, this film couldn’t exist if other superhero films hadn’t previously cleared a path in pop culture. But while it follows that path, Deadpool also takes plenty of pleasure in traveling side roads, driving in the wrong lane, and leaning out the window, sticking its tongue out at convention. It’s a rousingly fun trip.