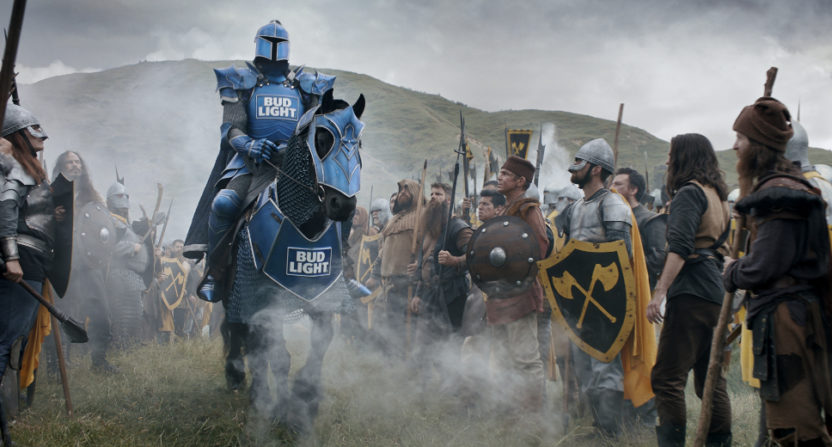 Bud Light’s “Dilly Dilly” catchphrase has spread throughout the sports world this year, embraced by everyone from Iowa State football fans to Houston Astros’ fans to Pittsburgh Steelers’ quarterback Ben Roethlisberger, and that’s led to the brand expanding on the original “Banquet” commercial. Their first follow-up, “Pit of Misery,” came out in November, and then they got some more attention with a thematic town crier cease-and-desist (offering a Minneapolis brewery some Super Bowl tickets to stop making “Dilly Dilly IPA”).

Recently, they’ve been planning out a “Super Bowl Trilogy,” launching the “Wizard” spot in December, then following it by debuting “Ye Olde Pep Talk” Jan. 18 (it then aired during both the AFC and NFC championship games a few days later). That 30-second pep talk spot is going to make a comeback during the first quarter of Sunday’s Super Bowl, and it’s going to followed in the second quarter by a 60-second conclusion, “Bud Knight,” which they released Thursday morning:

As with the rest of these Dilly Dilly ads, this was created by well-known ad firm Wieden + Kennedy (known in the sports world for their This Is SportsCenter commercials with ESPN, their recent work with Fox Sports and more). This one was directed by Jim Jenkins (who’s directed all of these spots) and filmed in Te Kuiti, New Zealand. And it’s interesting for even more directly bringing modernity into this medieval world with the convenience store, for decking a knight out in Bud Light armor, for the knight initially ignoring the battle to go buy more Bud Light, for the sword effect and for the funny closing line by the king. That’s an apt way to cap this particular storyline off, but don’t despair if you like these ads; this may be the final chapter of this trilogy, but comments from their release suggest we may see more in the “Dilly Dilly universe” ahead.

“Humor and friendship is at the core of what Bud Light and beer drinking is all about – and that’s why ‘Dilly Dilly’ has been such a great success. Bringing ‘Dilly Dilly’ to the Super Bowl – one of the biggest nights for friends and family – was a no-brainer,” said Andy Goeler, vice president of marketing, Bud Light. “The final chapter of our Bud Light ‘Dilly Dilly’ trilogy is definitely an epic one, but stay tuned for more from Bud Light and the Dilly Dilly universe in 2018.”

Here’s a look at what’s led to this “Battle of Beer Run,” both in convenient video recap and in an illustrated timeline: 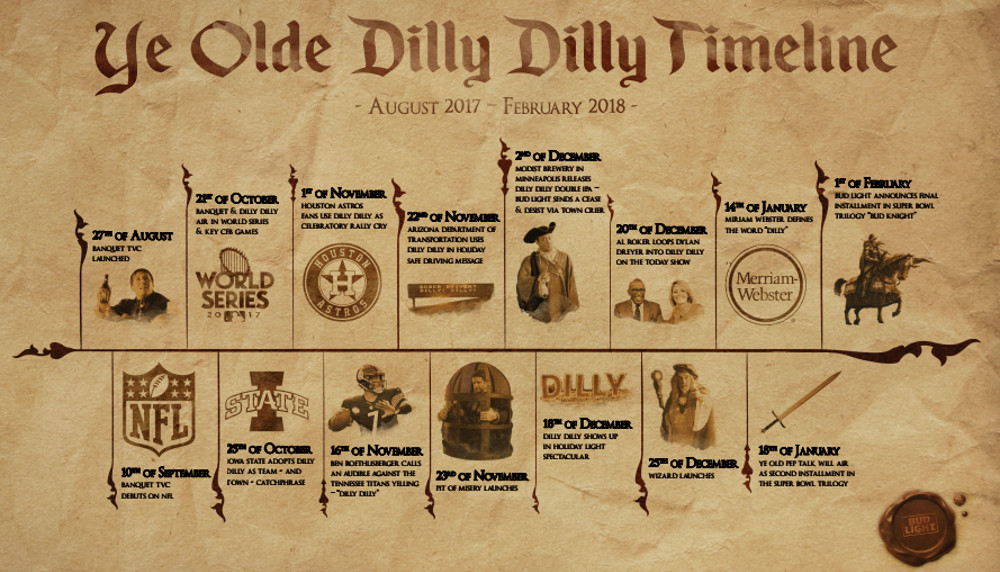 Something interesting not on the timeline, but one that furthers the sports connections, are the little extra ads Bud Light has done here and there. They did the shorter “Sacrifice” spot, with the king briefly asking the wizard to turn him into Bud Light, they did a digital “The Cart Loadeth” spot, and they even did appropriate digital spots for each of the Super Bowl teams (plus consolation ones for the two that didn’t make it):

We’ll see if “Rely on the wisdom and handsomeness of thy quarterback” or “Philly Philly” winds up being the more appropriate advice Sunday.