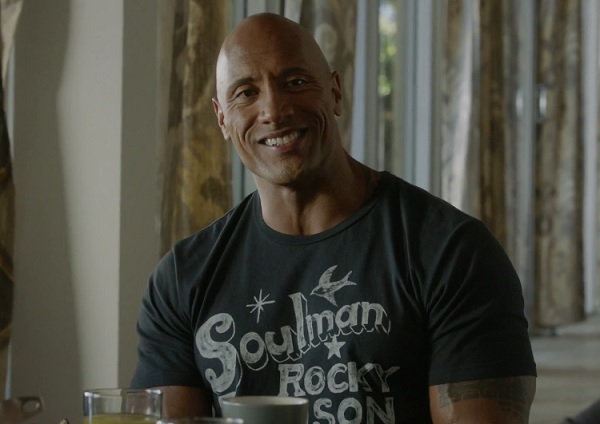 During the nearly 20 years that Dwayne Johnson has been known as The Rock, you have to believe he’s been eager for the opportunity to title a project “Rock and a Hard Place.” That time has now arrived, and the title isn’t just cute. It’s actually quite appropriate to the subject matter.

On Wednesday, Johnson’s company, Seven Rock Productions, and HBO (along with 44 Blue Productions) announced that they were teaming up to produce a documentary for the network about a youth prison camp. The film will be titled Rock and a Hard Place, and follows Johnson as he interviews young prisoners involved in a six-month rehabilitation program that could significantly reduce their sentence if satisfactorily completed.

EXCLUSIVE: Our @SevenBucksProd is proud to partner with @HBO Documentary Films & @44_Blue to bring you “ROCK AND A HARD PLACE”. A look at one of the most hard core and successful boot camp prisons in the world (an astonishing 9% recidivism rate, while the national prison rate is 70+%). The moment I stepped inside, spent time with and spoke to these incarcerated young men, I felt in my heart the world should see their struggle and hopefully witness their triumph. I was arrested multiple times starting at the age of 13yrs old. I was once in their shoes, but I changed and I know some of these young men can too. It’s a powerful documentary that’ll hit you to the core. Can’t wait for you to see it. COMING THIS MAY. #SevenBucksProds #44Blue #HBODocumentaryFilms #RockAndAHardPlace

From an official press release:

“Rock and a Hard Place captures the lives of incarcerated young people who are granted a second chance: the opportunity to trade an extensive prison sentence for a fresh start by completing the famed Miami-Dade County Corrections & Rehabilitation Boot Camp Program. This one-of-a-kind program reports a recidivism rate close to 9 percent, while the national rate of prison recidivism is approximately 70 percent.”

For Johnson, teaming with HBO seems like a natural fit since the two have already partnered on the show Ballers, which is now in production for its second season. But this documentary hits a personal note for the action star as well.

“By the time I was 16, I had been arrested eight or nine times for a variety of things,” Johnson said in the press release, “and can relate to what these kids are going through.”

Rock and a Hard Place is set to debut on HBO in May, though an exact release date has not yet been announced.