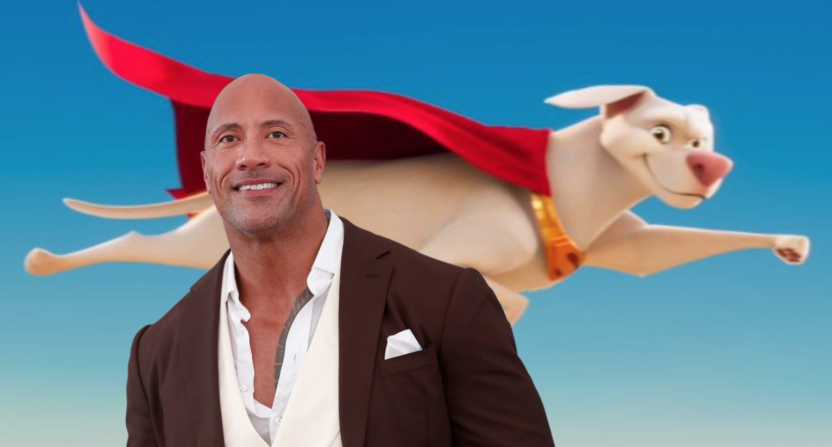 There’s probably a joke to be made here about Dwayne Johnson’s career going to the dogs. (Uh-oh… did we just do that?)

The global superstar already seems busy enough with Young Rock just finishing its first season on NBC, F9 (Fast & Furious 9) coming to theaters on June 25, and Johnson currently working on his DC Comics superhero film Black Adam. But his next gig will only involve using his voice, so maybe he’ll be able to play that role while squatting 500 pounds.

According to Deadline, Johnson will voice Krypto the Super-Dog in the upcoming animated movie, DC League of Super-Pets. Johnson isn’t only providing his voice to the project, however. His production company, Seven Bucks, is also involved with the film.

DC League of Super-Pets, which was first announced last year at DC’s online FanDome event, is currently scheduled for a May 22, 2022 release. That will presumably only be a theatrical release, as WarnerMedia only scheduled 2021’s slate of films for day-and-date premieres in theaters and on HBO Max.

Krypto the Super-Dog was introduced in Adventure Comics No. 210, published in 1955. Typically in DC Comics mythology, he’s Superman’s pet from the planet Krypton. Thus, he can fly and has enhanced strength like the Man of Steel. Though his origin and storyline has changed many times over the years, the consensus is that he was originally sent to Earth by Superman’s father Jor-El as a test before Kal-El was launched into space.

Other super-powered animals that have joined Krypto in the League of Super-Pets over the years include Batman’s Ace the Bat-Hound, Supergirl’s Comet the Super-Horse, Beppo the Super-Monkey, and Topo (Aquaman’s octopus sidekick). The animal superheroes have been featured in previous animated series, such as DC Nation’s DC Super Pets animated shorts, and a line of children’s books.

Who will join Johnson in the voice cast hasn’t yet been announced, though Warner Brothers and Warner Animation Group promise an “all-star” collection of talent.

The film is written and co-directed by Jared Stern, whose past work includes The Internship, The Lego Batman Movie, and the upcoming Green Eggs and Ham series. Sam Levine (Penn Zero: Part-Time Hero) is directing with Stern. John Requa and Glenn Ficarra (This is Us) and Nicholas Stoller (Neighbors) are executive producers on the project.