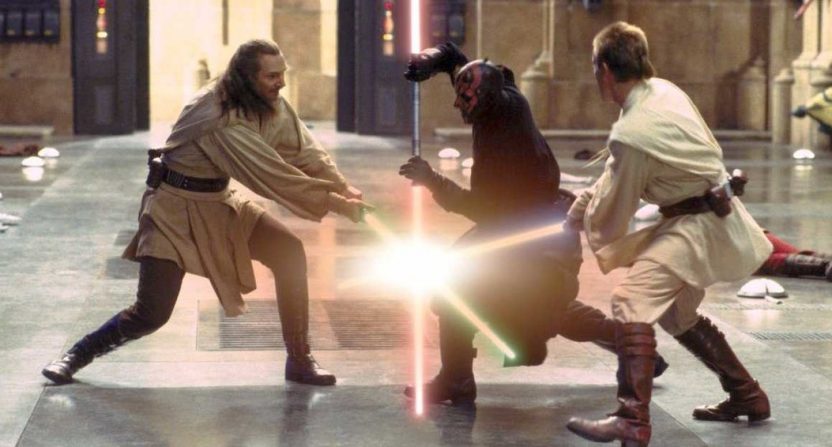 A long time ago in a galaxy not too far away emerged the event of a lifetime- or so we thought: a fully operational new chapter to the Star Wars trilogy.

Get ready to party like it’s 1999. Star Wars: Episode I- The Phantom Menace celebrates its 20th anniversary this month. It was the movie that, for better or worse, rebooted the franchise. When it was released on May 19, 1999, it was supposed to be the last great communal pop culture experience of the century before the Y2K bug shut down civilization.

Star Wars endures because it’s one of the rare sagas that spans generations. The passion for these movies has been handed down from generation to generation. Parents watch the original films with their children. They stand the test of time, owing their longevity to terrific storytelling and memorable characters, coupled with ground-breaking special effects.

It’s hard to sum up what a big deal The Phantom Menace was. The closest modern reference in terms of anticipation is probably Avengers: Endgame. When Star Wars filmmaker George Lucas first announced in 1994 that there would be new films detailing the rise of Darth Vader, people:

A. Lost their freaking minds.

The Phantom Menace wasn’t the first prequel, but it might have perfected the concept: take a previously successful franchise, develop an origin story, cast younger actors, watch the money flow in. We’ve seen this formula duplicated in X Men, Alien, and Star Trek.

As a marketing and business strategy, it worked. The hype for the first new Star Wars film since Return of the Jedi (1983) was something never seen before.

In a pre-smartphone era, fans camped out for weeks to score advance tickets. YouTube didn’t exist. You had to watch trailers with QuickTime. The second one for The Phantom Menace set an internet-record by being downloaded 3.5 million times in the first five days. This was huge news, leading the Washington Post to write, “It is unprecedented for an advance screening of a movie trailer to attract so much curiosity.”

Theatres were ready to cash in too. Multiple screenings were scheduled. Fans dressed up as their favorite characters. It might have been the first time that cosplay was viewed as standard operating procedure rather than just nerds (a pejorative term back then) in costumes.

The movie couldn’t possibly live up to the hype.

[Everyone, all together now]: “I have a bad feeling about this.”

The Phantom Menace was the first in the franchise to be directed by its creator George Lucas since the original Star Wars. The 1977 landmark movie was so revolutionary that it earned ten Academy Award nominations. It was a Best Picture nominee at a time when such an honor for a science fiction film seemed implausible. Surely Lucas would create something visionary to critical acclaim again. After all, he had great source material: the story of how Anakin Skywalker becomes Darth Vader.

The cast was highlighted by Natalie Portman (who first wowed us in Léon: The Professional (1994), veteran actor Liam Neeson, and rising star Ewan McGregor (who had the toughest assignment, portraying young Obi-Wan Kenobi). And then there was the child version of Anakin Skywalker, played by a relative unknown- Jake Lloyd.

This was the movie too big to fail.

The reviews were mixed. Perhaps the best compliment you can give The Phantom Menace: it was stunning to look at. Legendary critic Roger Ebert called it an “astonishing achievement in imaginative filmmaking.” The Phantom Menace earned Academy Award nominations for Best Sound Effects Editing, Best Visual Effects, and Best Sound.

However, Kenneth Turan of the Los Angeles Times described it “as a considerable letdown, as Lucas and company either misjudged or did not care to re-create key aspects of what made “Star Wars” a phenomenon. While the new film is certainly serviceable, it’s noticeably lacking in warmth and humor.”

The Phantom Menace also suffered from not enough action and poor dialogue. It could’ve overcome the latter if the former was better. But the plot was bogged down by too many walking and talking scenes and meetings.

Vote of no confidence? Boring!

Did Lucas write the script while channel surfing between Syfy and C-SPAN?

One of the reasons why The Empire Strikes Back remains arguably the greatest science fiction movie of all-time is that it’s a perfect blend of story, dialogue, and action. It’s a movie that moves. No scene is wasted. You feel like you’re on an amusement park ride. Watch it again. You’ll be shocked by the differences in pacing between The Empire Strikes Back and The Phantom Menace.

Lucas’ limitations were exposed. He apparently tried to get Ron Howard, Robert Zemeckis, and Steven Spielberg to direct. They all turned him down.

The Phantom Menace rations the action until you finally get the payoff near the end: Qui-Gon Jinn (Neeson) and Kenobi versus Darth Maul. Darth Maul is one of the few things that The Phantom Menace gets right. He’s the most visually appealing villain in the Star Wars universe. Great facial makeup while twirling a baton of death. Double-bladed lightsaber! Awesome sauce. Why did they kill him off?!? (Spoiler Alert!)

Ok. We’ve made it this far without talking about one of the most hated characters in movie history. Jar Jar Binks was not only annoying. Some called him a stereotype of black people. The backlash was so strong that Ahmed Best, the African American actor who lent his voice and movement to Jar Jar Binks, said he considered suicide. Another actor who took considerable heat was Lloyd, whose performance earned him a Golden Raspberry Award for Worst Supporting Actor. He lost to…. co-star Ahmed Best.

Complain about The Phantom Menace all you want. It was a financial success story.

Today, The Phantom Menace has a 59 percent audience score on Rotten Tomatoes. That’s not as bad as the most recent Star Wars movie. The Last Jedi has an audience score of 44 percent, making it easily the most polarizing movie of the franchise.

What’s the legacy of The Phantom Menace? First and foremost, it changed the way movies were made with its cutting-edge technology. It’s beautiful looking, from the sets to the landscapes to Padmé Amidala’s outfits. Speaking of Amidala, that role helped turn Portman into one of Hollywood’s top stars. Interestingly, it had the exact opposite effect on Lloyd. After The Phantom Menace, he appeared in only one more movie before retiring from acting in 2001. He cited bullying at school as a reason.

The Phantom Menace isn’t completely bad– it’s just underwhelming. A tighter script, aggressive editing, and a different director would’ve made it better. In 2017, Lucas acknowledged that he saw problems after viewing a rough cut. However, last month, Lucas also said The Phantom Menace was “one of my favorite movies and of course Jar Jar is my favorite character.”

Well, take heart. Lucas is no longer in charge. In 2012, Disney bought Lucasfilm for $4 billion and has already recouped its investment. Star Wars belongs to a new generation of filmmakers and there’s more to come. Not only is The Rise of Skywalker on the way, but also three new Star Wars films starting in 2022. All of this might not have been possible without The Phantom Menace.

Maybe in time, we will even forgive Jar Jar Binks. On second thought, nah.