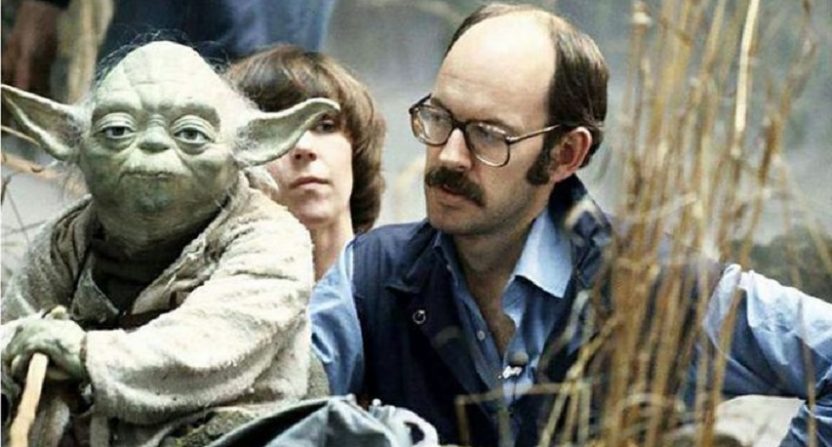 The legacy of Jim Henson and the Muppets will be receiving some renewed recognition with the documentary Muppet Guys Talking: Secrets Behind the Show the Whole World Watched, which premiered Sunday at the SXSW Film Festival. The film was directed by Frank Oz, who played a prominent role in the Muppets phenomenon as one of the original puppeteers and performers.

While some may remember Oz affectionately for playing Miss Piggy, Fozzie Bear, Animal and Sam the Eagle on The Muppet Show, along with Grover, Cookie Monster and Bert on Sesame Street, the puppeteer may be best known by Star Wars fans throughout the world and across generations for his performance as Yoda in The Empire Strikes Back, Return of the Jedi and The Phantom Menace.

Oz provided the voice of the diminutive Jedi Master in Attack of the Clones and Revenge of the Sith, but George Lucas opted for a CGI version of the character for those films, rather than a puppet. Though a digital creation may have been more practical for action purposes, especially in Yoda’s fight scene with Count Dooku in Attack of the Clones, the character seemed to lose its soul without Oz operating a physical puppet.

With the resurgence of the Star Wars saga following The Force Awakens and Rogue One, it’s only natural to wonder whether or not Yoda will return to the story as Luke Skywalker, Han Solo, Princess Leia, Chewbacca, C-3PO and R2D2 have in the newest films. At the end of an interview about his Muppets documentary with Variety‘s Ramin Setoodeh, that very question was posed to Oz. But he wasn’t saying anything.

“I feel like I’m a prisoner at war here, and I can only give you my name, rank and serial number. To be true to the people who asked me, and they are kind of my family, I have to say I’ve been asked not to talk about it. I love Yoda. I would be happy to talk to you about it at the time they let me.”

Unfortunately, Setoodeh didn’t ask Oz to blink twice if he’s playing Yoda in Star Wars: The Last Jedi or any subsequent sequels. That probably wouldn’t have worked well in a “print” interview anyway. But Oz’s non-answer might be an answer of sorts. After all, if he’s not in an upcoming Star Wars movie, why not just say no? Although Oz did say that he’s been asked not to talk about it, which could apply to not being in the movie as well. Maintain the mystery. Let the fans wonder.

It would have been more fun if Oz had uttered a Yoda line like, “Difficult to see. Always in motion is the future,” however. Then Setoodeh could have followed up with “Answer or answer not. There is no dodge.” But that’s probably asking too much of both men, especially when the interview was about Oz’s documentary, not Star Wars.

So maybe Yoda is in the next Star Wars movie or maybe he’s not. Oz isn’t saying. But if part of The Last Jedi‘s storyline is Luke Skywalker training Rey in the ways of The Force, there would presumably be an opening through which Yoda could shuffle in — if not physically, then as a Force Ghost. Obviously, we will find out when The Last Jedi hits theaters on Dec. 15. (Unless Yoda pops up in a trailer or something like that…)