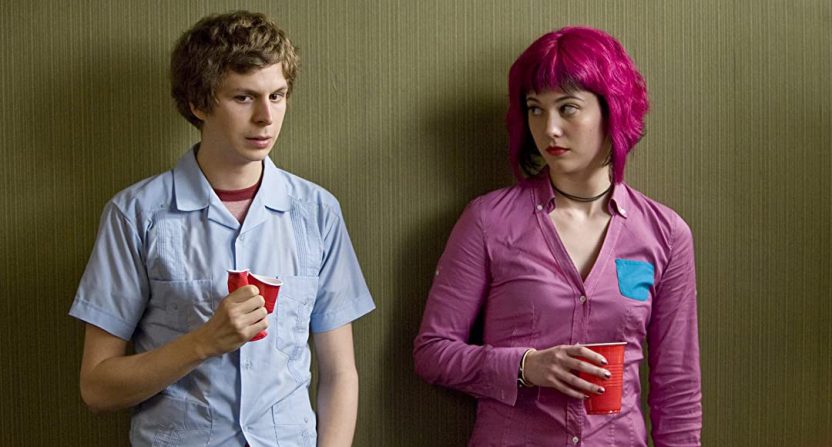 If you want something bad, you have to fight for it. But should you really have to take on a League of Evil Exes? Get ready to geek out. Scott Pilgrim vs. the World took us on an epic of epic epicness ten years ago.

Scott Pilgrim was John Wick (2014) before John Wick. Who knew? But instead of a secret underworld of assassins, Pilgrim takes on the seven-person League of Evil Exes. A fight to the death with each one, battling martial arts/video game/rock band-style. Seem ridiculous? Not any more silly than John Wick using a library book to kill a 7-foot-4, 291-pound man.

Scott Pilgrim vs. the World was something we had never experienced before, blending comedy and action with awesome visuals. Director Edgar Wright created a gamer universe that made you wonder: could you Mortal Kombat your way into winning the girl of your dreams?

“Scott, if your life had a face, I would punch it.”

It’s impossible to discuss Scott Pilgrim vs. the World without first recognizing what an abject failure it was in theaters.

Scott Pilgrim vs. the World the movie is based on Scott Pilgrim the graphic novels series. Because of its popularity, many assumed the movie would be a hit. Wright had directed successful films like Hot Fuzz and Shaun of the Dead. But budgeted for $60 million, Scott Pilgrim vs. the World grossed a paltry $47 million worldwide, making it one of the biggest bombs of 2010. This was shocking, considering it supposedly had a built-in audience. And even more astounding today when you look at the cast.

This film had superheroes. Two future Avengers: Captain Marvel (Larson) and Captain America (Evans), and Routh, who played the Man of Steel in Superman Returns (2006). Winstead would later be Huntress in Harley Quinn: Birds of Prey (2020). And don’t forget, Thomas Jane was The Punisher (2004).

How could it fail at the box office? (More on that later).

While it flamed out on the big screen, it found success on the smaller screen. Scott Pilgrim vs. the World became a huge hit in DVD sales, selling almost 200,000 copies in the first week, and making $28 million in domestic sales on DVD and Blu-ray.

Through word of mouth, people who were not necessarily fans of the graphic novels fell in love with the film. Many found it fresh, funny, and different. A cult classic was born.

“Please excuse my brother. He is chronically enfeebled.”

Cera has made a living playing characters featuring his trademark deer-in-headlights stare. He always appears surprised at the situations he finds himself in. Even when caused by his own poor decisions. His look made him so effective in Superbad and it works again as Scott Pilgrim, a 22-year-old Canadian bassist for the indie rock band Sex Bob-Omb.

The plot in a nutshell: Pilgrim dumps his 17-year-old (!) high school girlfriend Knives (Wong) to date mysterious American Ramona Flowers (Winstead). But while dating her he is constantly under siege by her exes.

Let’s talk about the fights. For all the humor and charm, this movie is not as good without the fight scenes. They are spectacular. The choreography and special effects make them a joy to watch. The best is the final showdown against the leader of the League of Evil Exes: Gideon Gordon Graves (Schwartzman). It’s dazzling to watch the swordplay coupled with 16-bit video game graphics.

Each member of the League of Evil Exes has their own backstory and distinctive personality. This includes Lucas Lee (Evans) as a tough-talking skateboarding movie star and Todd Ingram (Routh) who obtained supernatural powers by becoming… a vegan.

“Because I’m in lesbians with you.”

After defeating the League of Evil Exes, Scott Pilgrim wins back enigmatic Flowers. But should he have returned to loyal Knives? That has been a subject of debate. Flowers is portrayed as the kind of person who changes her mind as quickly as she changes her hair color, which goes from pink to blue to green. We are never convinced that she loves Pilgrim. Unlike Knives who clearly does.

There’s even an alternate ending which is more realistic.

Wish they used that one.

So, why was Scott Pilgrim vs. the World such a flop? For comparison’s sake, look at another movie from the same year that was also based on a graphic novel. Kick-Ass was released in April 2010 and had a budget of $30 million. It grossed $96 million worldwide.

Was Scott Pilgrim vs. the World a victim of poor marketing? Did your typical moviegoer not get it? Was it too clever for its own good? The reviews from critics were generally positive.

For whatever reason, it simply was not a draw. Instead, people went to see The Expendables, the No. 1 box office hit that weekend, or watch/rewatch Inception.

None of that matters now. Scott Pilgrim vs. the World found its audience. Today, it has an 84 percent audience score on Rotten Tomatoes. It helped usher in a new wave of stars like Larson, Winstead, and Evans. The cast reunited for the 10th anniversary last month.

Celebrate by watching it again on Netflix. And if you don’t like Scott Pilgrim vs. the World, Todd Ingram has something to say to you:

“Tell it to the cleaning lady on Monday.”