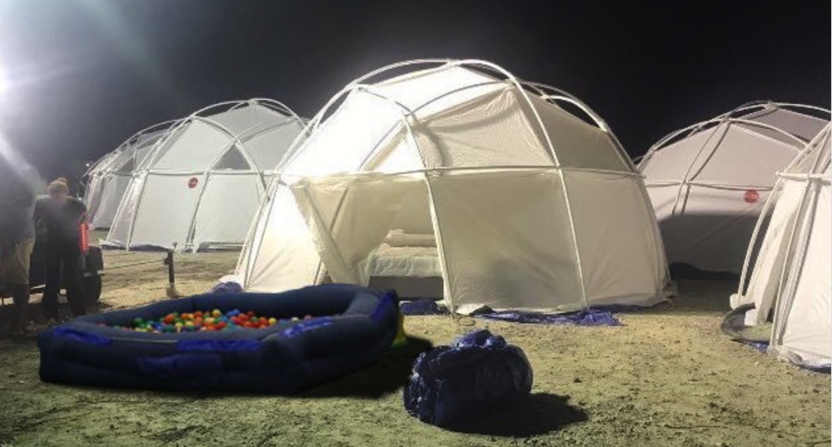 If you haven’t heard about it by now, that’s a little surprising. Every day, the mess that was Fyre Festival looks worse and worse, whether it’s the $100 million lawsuit the festival organizers are facing or the fact that former employees are speaking out in droves.

The music festival was supposed to be a music paradise for people who could afford thousands of dollars in tickets, food, travel, and accommodations. Of course, it didn’t turn out that way at all.

In the week since Fyre Festival basically collapsed on itself, the concert organizers have been slapped with lawsuits and bad press, mainly from either potential festival goers who are suing them or former employees.

Today, Variety published a unique article full of details from employees who I take it were never asked to sign a non-disclosure agreement.

Here’s how one production professional put it:

“Incompetence on an almost inconceivable scale.”

At first, a lot of people blamed Ja Rule and other celebrities who endorsed the festival, like Bella Hadid and Kendall Jenner. In the days since, most of the blame has fallen on Ja Rule’s main partner in the venture, 26-year-old Billy McFarland.

“They did know,” one production professional told Variety. “It’s so gross to me that [McFarland] says they were naïve — they had been told at every point that it was impossible and they ignored it.”

What exactly didn’t they know? Two production professionals who worked with McFarland reportedly told him “over and over” that it would be impossible for the event to be pulled off in time because of how overwhelmed they were and how little had been accomplished.

“The infrastructure just wasn’t there,” the former staffer continued. “It had to be built. [Fyre] hired a bunch of professionals and the professionals told them it was impossible — and they couldn’t handle that, so they fired everyone. I think the statement they released is a slap in the face to the people on the island and the production company that did end up working with them. They just didn’t want to hear it.”

That seems like a GREAT business plan. “Let’s hire a bunch of people who know what they are talking about and then when they tell us we can’t handle it, let’s fire them!”

Naturally, reps for McFarland, Ja Rule, and Fyre didn’t comment to Variety for their piece. Also, ‘Fyre Festival’ is a silly and dumb name.

“They had fired a [previous production company], so we took a look at how much had been done — and there were so many red flags,” one production professional said. “Things like water [supply], bathrooms and other everyday structures that should have been in place six months before — none of that had been done. We all said to them, ‘It takes at least eight months to a year to produce a festival, you have to push the date’ — we stressed that and said that over and over. And they were like ‘It’ll be fine, it’s not that big of a deal.’ They kept making it seem like we were exaggerating. It was like they didn’t care.”

If someone who helps produce music festivals tells you that you don’t have the necessary water, bathroom, and other everyday structures in place and you tell them you’ll be fine, you deserve to have this collapse on you.

“We said, ‘What you’ve promised [in statements and advertising promoting the festival] as opposed to what we’re even maybe capable of delivering in this amount of time is not the same. You’re going to destroy your brand if you try to have it on this date and don’t deliver what you promised. If you push the date a year, people will be upset. But once you deliver what you promised, they’ll get over it.’ But it was like they didn’t care: They literally kept saying, ‘We’re gonna be legends.’”

And instead got this…

“I kept stressing that they had to get festival insurance, you can’t run a festival without it, and I honestly don’t know if they ever got it,” the first former employee said. “And I know for a fact that even though the [emergency medical services] company and staff they’d hired was certified, the festival hadn’t secured the proper permits for them to be able to practice in the Bahamas.”

Not having the right permits to put this on in the Bahamas sounds just a bit illegal and suboptimal.

While McFarland and his partner Ian Brown are getting the brunt of the exposure and bad publicity, the two former employees said another person was also to blame: 24-year-old Chief Marketing Officer Grant Margolin.

“The marketing person behind this entire thing is Grant,” one said. “He kept saying in meetings, ‘I’m a marketing genius, I’m a prodigy — [the concerns] don’t matter, we’re gonna sell this and it’s gonna be amazing.’ He said that over and over and over. And after we went down to the Bahamas to assess the situation and we realized there was no possible way [the festival] was going to happen, he told the man who hired us that he wasn’t happy with [us] because we were a bunch of women who didn’t smile enough.”

“In multiple meetings, they promised the people on that island that this was going to change their lives — there would be so much tourism, they said they were going to build a hotel once it was over — they lied to every single Bahamian there. They went to restaurants and didn’t pay their bills, and when we were there they would never use their credit cards — they had giant wads of cash, all of them. They prepaid for their hotels in America — and then when we tried to use those cards to check in [to the island hotel], the cards wouldn’t go through. It was very weird.”

This was marketed one way and ended up the exact opposite. That’s also not a good thing.

A week after this all blew up in the public eye, two class-action lawsuits have been filed and bad publicity keeps on coming.

“When we were talking about menus, Grant even said, ‘They won’t care what we feed them.’ [The organizers] didn’t even understand that the things people paid for, that they had been promised, had to be real,” one former employee said.

First came Pepsi, then came United, and now we’ve gotten to Fyre Festival. The only thing that would make this trio even worse would be if Pepsi was the official soft drink sponsor of the event, and United was deemed the official airline.