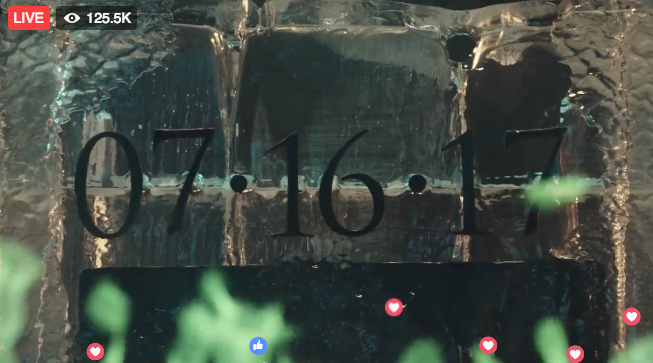 HBO’s Game of Thrones is arguably the most famous TV show in the world right now, and it’s also one of the most secretive. After months of saying the show’s seventh season would debut later than normal and refusing to announce a premiere date, HBO botched its premiere date release stunt.

July 16th, 2017 is when Game of Thrones season 7 will debut, but before fans knew that date, they spent an hour commenting “fire” on a Facebook Live video that crashed twice.

HBO announced this morning it would be announcing the premiere date with an interactive Facebook Live video.

At 2 PM EST, fans logged onto Facebook and began typing “fire” faster than any plot line in the show moves. Sadly for the fans, it didn’t work as HBO hoped it would, as the block of ice melted extremely slowly and the video went out twice.

We will be back and ready for more fire soon. #GoTS7

You’ll notice in the above tweet there was a flame with an illuminated circle around it in the top right corner of the video. During the first two attempts before the video went down a second time, the illuminated circle would get smaller and when it ultimately went out, the fire would stop. To get the circle back up, fans would have to comment “fire.”

After the video went down a second time, the circle stayed illuminated, either because so many people were commenting or HBO knew the whole thing was taking too long. The reveal started at 2 PM EST and the premiere date was not unveiled until 3:09 pm EST.

Naturally, a lot of people took to Twitter to express their frustration with how long it took for the date to be unveiled:

I haven't seen Game of Thrones botch something this bad since the Dorne storyline.

We take you now live to what the HBO marketing dept. is doing while their #GameofThrones feed is offline. pic.twitter.com/uMon7Q6HAD

The Winds of Winter will come out before this ice melts. #GameOfThrones

You know you're addicted to #GameofThrones when you're watching a block of ice being melt by fire just to know when #GoTS7 starts! pic.twitter.com/DqBKRW8ywL

To entice fans to keep watching, HBO inserted videos of different actors from the hit series throughout the live stream.

The number of cast members they'll have interspersed in this stunt will reveal to us they knew this would take a verreh long time. pic.twitter.com/0SrT6mgi8p

Above, you can see Lena Headey (Cersei Lannister) cheering fans on. Also included in the video were Gwendoline Christie (Brienne of Tarth) and Alfie Allen (Theon Greyjoy). After the video ended, the date was revealed, a short teaser was shown, and Liam Cunningham (Davos Seaworth) thanked fans for watching.

The entire stunt was ridiculous and took extremely long. However, no show could do this to their fans and be okay with the backlash. For all the flack HBO is sure to get today over the stunt, how long it took, and the technical difficulties, many more people will praise them.

For the majority of the time, there were over 100,000 people watching FB Live Stream, which doesn’t seem like a lot in theory, but it is when you think about it more in depth. This video was shown during a work day in the United States and also was simply ice melting. Most fans of the show probably saw the stunt for a brief second and then thought, I can just wait and find out when it premieres later, noo need to watch ice melt.

I will admit, I watched a good chunk of the video, and I was disappointed. However, the ending teaser and release date made it all worth it. Winter is Coming, and I am ready.

Along with announcing the show’s release date, HBO also made it official, confirming that season seven will only feature seven episodes. The show’s final season, season eight, is expected to be eight episodes long.

You can read all of our Game of Thrones content, including recaps from season six, right here.