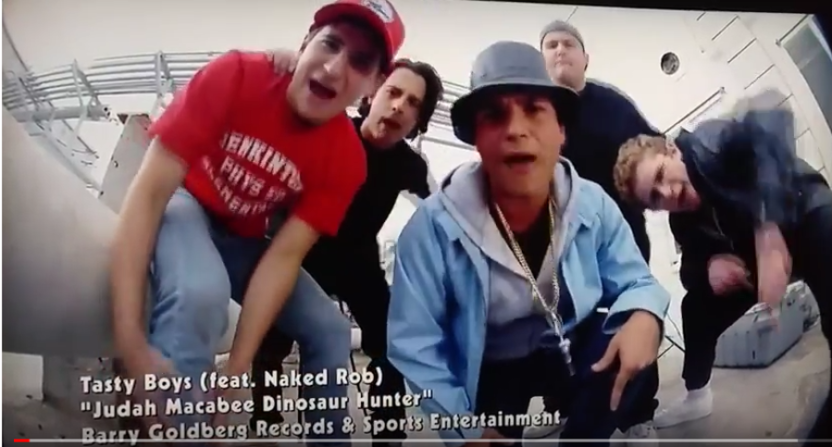 ABC’s The Goldbergs has had an impressive five-season run so far of telling stories about creator and executive producer Adam Goldberg’s family and his experience growing up in the 1980s, and many of those have involved music. The oldest Goldberg child, Erica (Hayley Orrantia), has long dreamed of a career as a singer-songwriter, and that’s led to her performing plenty of songs on the show, while middle child Barry (Troy Gentile) also dreams of stardom with his “Big Tasty” rapper alter ego. Now, ahead of Wednesday’s episode “Parents Just Don’t Understand” (which will feature Barry and Adam (Sean Giambrone) trying to write their own version of the DJ Jazzy Jeff and The Fresh Prince classic), the show is coming out with an album that will feature some of the best music displayed on-air. The album will sell for $8.99, and will be available on multiple digital platforms. Here’s more on this from Lesley Goldberg (presumably no relation) of The Hollywood Reporter:

Available for preorder Tuesday and on sale Wednesday on digital platforms (including iTunes, Amazon, Spotify and more), The Goldbergs Mixtape, which is being released by Madison Gate Records, will feature 14 tracks. Five of the songs are classic ’80s tunes that star Hayley Orrantia (who plays Erica) covered, including Cyndi Lauper’s “True Colors” and Katrina & The Waves’ “Walking on Sunshine,” performed with AJ Michalka. The other nine are original songs written specifically for Adam F. Goldberg’s 1980-something semi-autobiographical comedy and include “Love Ninja,” featuring Orrantia and Troy Gentile (who plays Barry), as well as the latter’s “Ferris Wheel.”

And a promo for the album, which will air after Wednesday’s episode:

Let’s look at some of those great tracks, as displayed on-air. First, Kurtis Blow‘s amazing “D&D”:

How about Erica and the all-female Rush cover band’s version of “Tom Sawyer”?

And last, but not least, the Tasty Boys’ Hanukkah origin story of “Judah Maccabee, Dinosaur Hunter”:

Through the span of more than 100 episodes (Wednesday’s will be the 104th), The Goldbergs has proven great at cultural references, hilarious jokes, and touching family moments. And music’s been involved in all three of those, so a tie-in soundtrack makes a lot of sense, especially considering that Orrantia has a legit singing career and Gentile’s rapping is just generally funny. For fans of the show in particular, this might be a solid purchase, and it might also be a way to get those who aren’t yet watching to tune in and see what all the fuss is about. Who doesn’t want to go back to 1980-something?