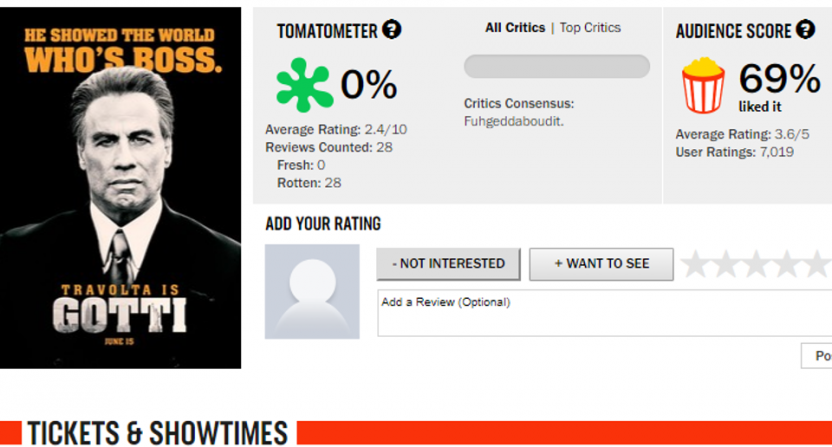 Critics’ reviews often play a significant role in movies’ box office success or failure, and that’s especially true when it comes to sites that aggregate reviews like Rotten Tomatoes and Metacritic. Even some much-panned movies like Batman v. Superman: Dawn of Justice and Gigli found a few critics who liked them, clocking in at 27 percent and six percent fresh respectively. So the 0 percent for new John Travolta-starring mob movie Gotti is pretty remarkable, putting it in rare company, and that has the movie taking potshots at critics in a new ad campaign:

Audiences loved Gotti but critics don’t want you to see it… The question is why??? Trust the people and see it for yourself! pic.twitter.com/K6a9jAO4UH

Hear it from the PEOPLE! Who do you trust??..The actual people who saw the movie or some TROLLS behind a keyboard? #GottiMovie in theaters NOW! pic.twitter.com/G8YAxtLYa3

Ah, yes, trust “the PEOPLE!” instead of people who make a living reviewing movies, as they’re just “trolls behind a keyboard.” Right. But the funny part of this is the film bragging about its audience scores. Yes, they are much higher, clocking in at 75 percent at one point Tuesday and 69 percent (nice) by Tuesday evening. But that’s suspicious; as Mashable’s Kellen Beck notes, the film hasn’t actually been seen by many people, and many of its reviews come from either private accounts or accounts that have only reviewed a couple of other things, raising questions about if this is an attempt to manipulate the scores.

Despite only opening in roughly 500 theaters, Gotti has received more than 6,900 audience reviews on Rotten Tomatoes, while Incredibles 2, which opened in about 4,400 theaters (and made about 180 times more money), has received just over 7,600. Those numbers don’t really add up.

A pattern begins to form after a closer look at who is reviewing Gotti so well. The majority of users who scored the movie a full five stars created their accounts in June and only reviewed Gotti and maybe one other movie. Interestingly, a whole bunch of accounts that gave Gotti five stars are private.

We reached out to Rotten Tomatoes to ask about the reviews of Gotti and they told us that “all of the ratings and reviews were left by real users.”

As Beck goes on to note, just because these reviews were left by “real users” (so people who verified their email), that doesn’t mean they have no agenda, and it doesn’t mean they’re from people who saw the film. And we’ve seen companies try to push their products before by manipulating reviews. Of course, maybe it’s less sinister; maybe it’s just people trying to go against critics, or maybe it’s actually people who did see and enjoyed the movie.

But this certainly looks suspicious, and isn’t exactly a convincing case that Gotti is good. From here, we’ll stick with those “keyboard troll” critics, and all the lovely things they had to say about the movie. Like Johnny Oleksinski of The New York Post, who wrote that he’d “rather wake up next to a severed horse head than ever watch Gotti again.” Now that’s a rave review, and one that seems more accurate than many of these “audience reviews” on Rotten Tomatoes.