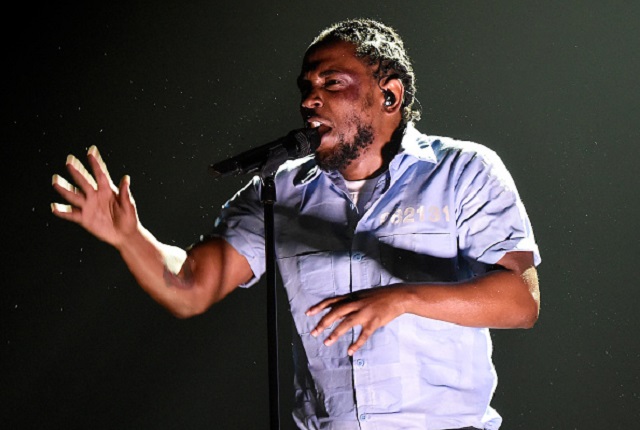 The Grammys, a three-and-a-half-hour concert with a couple of awards thrown in for fun, took place Monday night in Los Angeles. The show had its fair share of pop and country acts that play well in middle America, but also featured stellar performances from rapper Kendrick Lamar, and the cast of the Broadway musical Hamilton.

It also faced the difficult decision about what to do with several popular artists who have passed away in the past year. Obviously, there would be tributes to David Bowie and Glenn Frey, but what about B.B. King, Lemmy Kilmister, and Maurice White of Earth, Wind, and Fire? Well, when you have three-plus hours to work with, you can fit everybody in, and that’s exactly what the Grammys did — even if it meant we had to see Johnny Depp onstage during the Lemmy tribute.

If you couldn’t stay up and watch the entire three-and-a-half-hour show, here are some of the highlights and lowlights:

LADY GAGA’S TRIBUTE TO DAVID BOWIE
The most hyped tribute of the evening was Lady Gaga’s ode to Bowie, and while the performance was frantic and a little overdone, it was one of the highlights of the night. Gaga attempted to cram as many Bowie songs as she could into five minutes, but could have put on just as good a show with far fewer songs.

GRAMMY NO-SHOWS
Scheduled performer Rihanna canceled abruptly during the Grammys telecast after seeing a doctor at the Staples Center. The singer has been suffering from bronchitis, and was told that singing could damage her vocal chords. Also rumored to be performing with The Weeknd was Lauryn Hill, but her reps deny she was ever involved with the show — even if she appeared during rehearsals leading up to the show.

#NAVY so sorry I couldn't be there ….. Thanks Grammys and CBS for your support tonight.

KENDRICK LAMAR STEALS THE NIGHT
Lamar was the highest nominated artist this year with 11 nominations, winning seven trophies (including a sweep of all four rap awards), but missed out on all of the big awards of the night. However, he stole the show with the most energizing and important performance on the Grammys stage in quite some time.

ADELE AUDIO ISSUES
At some point during Adele’s performance of “All I Ask” the audio dropped, and the singer seemed shaky throughout the rest of the song. After the show, Adele addressed the problem stating that the piano’s mics fell on the strings leading to the sound issues.

SAY HELLO TO ALABAMA SHAKES
For a large portion of the viewing audience last night, this was their first look at Alabama Shakes. In less than three years, the band has gone from indie darlings to winning three Grammys and performing on the show. The band’s latest album, Color & Sound, has sold just under 800,000 copies, but will surely see a bump in sales after last night.

THE HOLLYWOOD VAMPIRES?
Dave Grohl introduced a new supergroup, Hollywood Vampires — consisting of Alice Cooper, Joe Perry and Johnny Depp, along with Duff McKagan and Matt Sorum from Guns N’ Roses — who sloppily performed a song before paying tribute to Lemmy with a rendition of Motorhead’s  “Ace of Spades.”

AWKWARD TRANSITION OF THE NIGHT
Coming out of a break, Miguel performed Michael Jackson’s “She’s Out of My Life” from Off the Wall in tribute to that album’s 35th anniversary. He then mentioned a Spike Lee documentary about the album, before presenting Alabama Shakes with their Best Rock Performance Grammy. It all seemed very out of place.

GAGA WAS GOOD, BUT THE B.B. KING TRIBUTE WAS BETTER
Bonnie Raitt introduced Chris Stapleton and Gary Clark Jr., and then joined the duo to perform King’s classic “The Thrill Is Gone.” Unlike the Bowie tribute, this one was simple and featured some great guitar-playing from all three artists.

NO, WAIT — TAYLOR SWIFT STOLE THE NIGHT
In the biggest stunner of the night, Taylor Swift’s 1989 won Album of the Year over some stiff competition, including Lamar’s To Pimp a Butterfly. During her acceptance speech, Swift seemingly took a swing at Kanye West, who recently made some comments that he is the reason for Swift’s success. So far, there has been no rebuttal from Kanye. (Well… maybe.)

Here are the other big winners from the evening:

Song of the Year: “Thinking Out Loud” – Ed Sheeran

A complete list of all the Grammy winners and nominees can be found on the Grammy website.