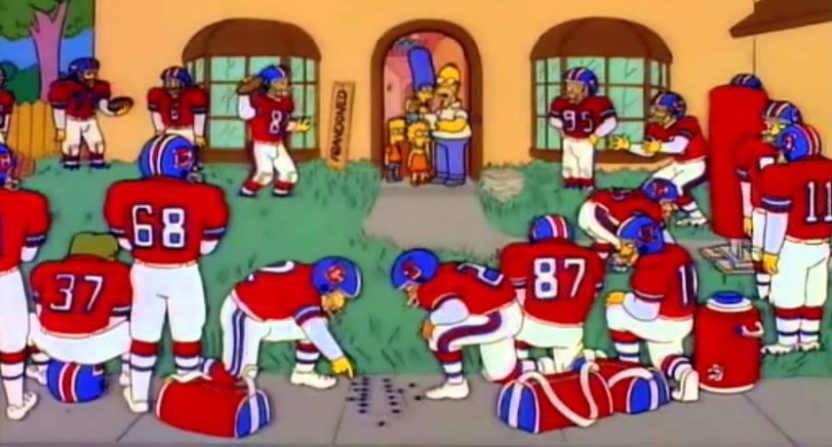 This week, The Simpsons celebrated its 30th anniversary after debuting on The Tracey Ullman Show all the way back in 1987.

Putting that in perspective, it was the same year that Magic Johnson and Larry Bird matched up in the NBA Finals and Vinny Testaverde was the No. 1 pick in the NFL Draft. It’s a run that is unmatched in the history of television and will probably never be duplicated again.

To celebrate the major milestone, we polled some of our writers on what their favorite Simpsons episode of all-time. With over 600 episodes to choose from, that’s a fairly monumental task, but we tried our best. As you might expect, all of our selections come from the golden age of the series in its first ten years of existence. Those episodes of The Simpsons in their prime are the funniest, cleverest, and smartest that’s arguably ever been created.

Scroll down and see if you agree with some of our selections and leave a comment if we missed your favorite.

Taylor Nigrelli: “You Only Move Twice”

This episode is great for so many reasons, but none more so than the presence of Hank Scorpio. The charming and sociopathic Scorpio is voiced by veteran guest star Albert Brooks. The basic premise of the episode is Homer gets hired by a tech company in a Silicon Valley style community called Cypress Creek. He loves his job and his new boss (Scorpio) but is oblivious to the fact that he is attempting to forcibly take over the East Coast as the first step in a world domination scheme.

The episode features classic Homer ignorance, but only reveals the truth to the audience. The Simpsons are none the wiser. This peaks when Homer goes to the plant to tell Scorpio he is quitting (Marge, Lisa and Bart are not enjoying the Cypress Creek experience) while his boss is locked in a deadly fight with the US Army. He doesn’t notice a thing and isn’t phased when Scorpio asks him to kill a few people on the way out.

The best joke of the episode — and maybe one of the best in the entire series — came at the end. The Simpsons return to Springfield as a newspaper informs the audience that Scorpio has seized the East Coast. Homer, who had previously revealed to Scorpio that his lifelong dream was to own the Dallas Cowboys, gets a telegram thanking him for all the help and hoping the attached present will get him closer to achieving his dream. The camera pans back to reveal the Denver Broncos are practicing on his front lawn. “Awe, the Denver Broncos!” Homer laments. Classic Homer; oblivious, ungrateful, but always loyal to his family.

Andrew Bucholtz: Marge vs The Monorail

There are so many great Simpsons episodes to choose from, but “Marge vs. the Monorail” stands out to me because it has both an exceptionally high peak (one spectacularly funny moment) and overall hilarity.

For me, the peak is Lyle Lanley (played superbly by Phil Hartman)’s Monorail song, which manages to be incredibly funny regardless of whether or not you’ve seen The Music Man parts it’s parodying. That song also has some killer rhymes (“What about us brain-dead slobs?”/”You’ll be given cushy jobs!”), provides an opportunity for Springfield residents from Chief Wiggum to Apu to weigh in, and does what The Simpsons at its best accomplished in terms of being outrageously funny while still making points.

In this case, it nicely skewers humanity’s willingness to spend on flashy trends while ignoring important but less-sexy needs (“But Main Street’s still all cracked and broken!”/”Sorry, Mom, the mob has spoken!”). It also provided a GIF that’s regularly used in every sports arena debate (“I’ve sold monorails to Brockway, Ogdenville, and North Haverbrook, and by gum, it put them on the map!”).

But this tops my list because the episode’s not just the song; it’s full of other great moments, from Leonard Nimoy’s pitch-perfect appearance as himself to Harry Shearer’s portrayal of Sebastian Cobb to the giant donut saving the day at the end. Tremendous writing by Conan O’Brien, and outstanding work from everyone involved.

First off, trying to come up with one episode that’s your favorite is freaking tough. There’s about 100 or so episodes that could be somebody’s favorite episode and it would be a rational, popular choice.

I narrowed down my episodes to five with Marge vs. the Monorail, Last Exit to Springfield, Cape Feare and Homer Badman. I imagine I may change my mind at some point but I ultimately went with Lisa’s Substitute.

I was three the first time I watched Lisa’s Substitute, so I obviously didn’t appreciate what the episode was about at first. It’s not the most laugh-out-loud episode, but after re-watching the series many, many times over the past 30 years, I grew to appreciate heartfelt episodes like this. This hit home after I graduated from high school. This is going to sound sappy and very “woe is me” so I apologize in advance.

I was always great at school and loved the teachers I had, but I never really had any motivation to do any good in grade school. When I started, I would get mostly As but at some point, I wasn’t being challenged and stopped giving a damn and settled for Bs without studying and just doing the bare minimum. I always had a taste for learning and I always will, but I wanted to learn the things I wanted to learn for my own benefit and not because of grades or being forced to only because I was being tested to determine how much funding my school would get.

I didn’t have a Mr. Bergstrom in real life who went the extra mile to instill in me that learning about anything, whether you do it independently or in a classroom, was worth seeking out as long as it’s important and meaningful to you. It sounds completely bizarre, but you could say I got my love of learning from The Simpsons.

Maybe the public school system has sucked the life and motivation out of the Mr. Bergstroms of the world, but every kid deserves to be taught by a Mr. Bergstrom at some point in their lives.

Also, the subplot of Martin vs. Bart going for class president had some very clear parallels to last year’s election and taught us something that applies in all walks of life. “You’ll never go broke appealing to the lowest common denominator.” Not bad for an episode that premiered in 1990.

This is my pick for one reason and one reason only: Open Wide for some Soccer. Parodying american soccer before it actually became a thing. And 20 years on, it’s still amazing.

Kevin McGuire: Marge vs The Monorail

I haven’t watched The Simpsons in years, but I know that if for whatever reason I flip through and the monorail episode is on, I’ll stick around to watch it. That episode included a little bit of everything that made The Simpsons great. It had a terrific guest star in Phil Hartman, a man who was every bit a part of the show’s prime as anyone despite not being a main voice, and Leonard Nimoy showed the franchise could boldly go where no animated show has before.

The script was written by none other than Conan O’Brien, and the musical score still gets stuck in my head any time I happen to step foot on a monorail at the airport or Disney World.

David Rogers: Marge vs The Monorail

I have to go with “Marge vs. The Monorail” for the obvious reasons that some probably already stated. For me personally, this is the episode I quote with the most regularity. There’s just so many situations where “Mono means one” or “Rail means rail” comes into play. Lyle Lanley may not be my favorite one-time character, but he’s up there and we all know how catchy the infamous Monorail song is still to this day.

That being said, it was difficult to narrow it down to just one episode. My close second would be “Lisa on Ice,” “You Only Move Twice” or “Homer to the Max.”

That’s the thing with the older Simpsons episodes. There’s just so many good ones to choose from.

Matt Yoder: Homer at the Bat

Picking your favorite Simpsons episode is an almost impossible task, like asking a parent to pick their favorite child. It’s been 30 years and The Simpsons is still the television show I would rather watch above all others. It’s been 20 years since that golden age of the show and the episodes from back then are still as good and still as relevant today as they were back then.

For me, the shortlist includes You Only Move Twice, Homer’s Enemy, Lisa the Iconoclast, 22 Short Films About Springfield, and Radioactive Man.

But my choice is the iconic Homer at the Bat episode that featured an all-star lineup of guest stars from Major League Baseball helping Mr. Burns and the Springfield Power Plant defeat their rivals from Shelbyville. Maybe it’s my love of sports and The Simpsons that makes this crossover episode so special, but the show really does have it all. It bounces back and forth from the ridiculous to the heartfelt to the hilarious so effortlessly and easily that you could have a favorite moment from the episode every minute. (Mine might be Mr. Burns extolling the virtues of his first hand-picked team of ringers including Mordecai “Three Finger” Brown.)

As Mr. Burns confidently proclaims that it would take a statistically improbable number of calamities to befall his ringers, one by one they start to go down in insane circumstances. There’s Ken Griffey Jr. addicted to nerve tonic, Ozzie Smith falling into a bottomless pit, Steve Sax being put in jail, and Roger Clemens clucking like a chicken. Of course, the only big leaguer to make it to the game is Darryl Strawberry, who just happens to play Homer’s position.

Then The Simpsons delivers an ending that only they can. Mr. Burns pulls Strawberry and pinch hits Homer for him in spite of his nine home runs to “play the percentages,” which stands up today as a clever dig at some of the more trigger-happy managers out there. Of course, Homer becomes the hero… by taking a HBP straight to the noggin and driving in the winning run.

1 thought on “What really is the greatest Simpsons episode of all time?”