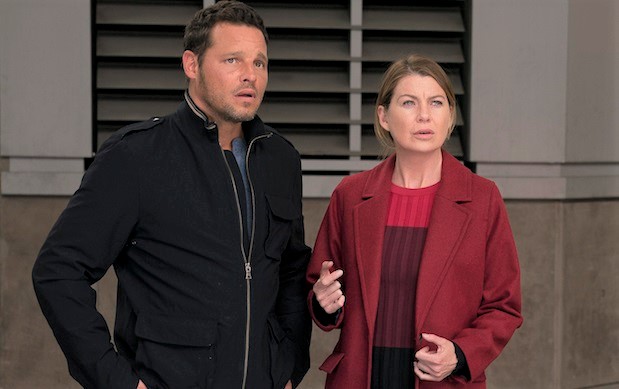 ABC’s “Grey’s Anatomy” hit its milestone 300th episode last week (Nov. 9). This struck my friend Jen and I, who regularly tweet at each other about the show that launched Shondaland, as a good time to discuss why, in the era of peak TV, we continue to watch what is decidedly not peak TV.

“Grey’s” was once peak TV. When it started, in the spring of 2005 (!!!), it was appointment viewing. It was sexy and fun and the characters were messy, in a relatable way. But it’s been 12 years since fresh-faced Meredith Grey, George Bailey, Christina Yang, Izzy Stevens, and Alex Karev showed up at Seattle Grace. Only Mer and Alex remain of that original group.

So I asked: Why are we still doing this? Below is some of our conversation, with additional thoughts on the show, wherein we discuss why we still watch, the problems with the show, the characters we like, and what we got out of its 300th (geezus) episode.

Lisa: Okay, so most importantly, there is a ton of TV out there. I’d say you and I have a penchant for bad TV (recently discussing how we missed “The Astronaut Wives Club,” of all things) so clearly we’re not in this for the greatness of it… that may have once existed, but certainly doesn’t this far in. So WTF are we still watching this show?

Jen: Honestly? I have NO clue. Yes, it can be entertaining, but more often than not it’s infuriating.

Lisa: But isn’t it sort of joy in the infuriating? Like, yes, all their decisions are terrible, but we get that about the world? To me, it’s sort of like comfort food. I don’t know about you, but around the singing episode I probably skipped a season and a half. And when I came back, I’d really *missed* very little, like an actual soap opera.

Jen: I grew up watching soap operas, so maybe this is just the modern day version — Shonda Does General Hospital. It is a comfort to know that no matter how badly I messed up, I can tune in on Thursday to see someone mess up worse. Also, I have skipped zero episodes — I always go back.

Lisa: Very much that! “Oh, my life is a mess… but not a Meredith Grey mess.” We’ll give you a completionist badge. I *get* the singing episode, of course. Have Tony winner Sarah Ramirez sing! But I just couldn’t.

Jen: I will never watch it again. I got sucked into this show because of the Super Bowl bomb-in-a-body episode. I had no chance.

Lisa: That was a fantastic episode. I mean, we’re all susceptible to Coach Taylor’s awkward smile (I genuinely can’t think of his real name right now… OH! KYLE CHANDLER!) Note: I think we can all agree that no matter what else Kyle Chandler does for the rest of time, he is always Coach Taylor.

Lisa: Seriously. Which is interesting, because that sort of led to Mer’s downward spiral to attempting to kill herself. From which she was immediately cleared to practice medicine. There are ZERO consequences for bad behavior on this show ever. Which is something we’ve also talked about: if we’re ever in a real hospital with “Grey’s” level doctors, we want an immediate transfer to somewhere where they competently practice medicine.

Jen: The Washington State Board of Medicine is seriously sleeping on the job. Not one of the doctors on the show should be allowed near patients.

Lisa: They shouldn’t be allowed near other people. They are terrible, terrible humans. Which leads into this question: who is the worst, past or present? Who is the best?

Jen: Well, Sadie was awful, but she was pretty minor. I’m going with Meredith as the worst and McSteamy as the best

Lisa: OMG, I forgot about Sadie. That was… a choice. (I had to Google because I could not remember who Sadie was, without some assistance. She was played by Melissa George and was Mer’s undergrad roommate who comes to Seattle Grace as an intern and then immediately starts an interns’ surgery club, which is basically fight club but with unqualified people doing surgery on each other. Yes, really.)

I agree with McSteamy. He was so perfect and light and wonderful. He was flawed but he sort of leaned into it, knowing he was imperfect, whereas everyone else is so serious.

Jen: And he was even a pretty good doctor!

Lisa: He came across as a totally vapid plastic surgeon and yet did really good work that helped people.

Jen: He was charming; he’s the type of man that you just can’t stay mad at.

Lisa: I think my worst is Kepner. She’s hung on for SO LONG while being not the least bit interesting or sympathetic. She’s just always whining.

Jen: Yeah… not sure who they are trying to reach with her, but I don’t mind her so much. They toned down the Christian stuff, it seems. Wasn’t she on Tinder last week?

Lisa: Yeah, I think so. It has been toned down, I just don’t know what purpose she’s serving. (I mean, really, none of them serve any purpose but at least Jackson’s pretty. And rich.)

Jen: Valid point. Any other character could fill her role, minus being Jackson’s baby mama, and even then, cutting her wouldn’t leave a void. They never see the kid anyway. Sometimes, there are too many characters for me to care about at one time, tbh.

Lisa: Oh my god, the kids! I kind of appreciate that the show knows kids aren’t the draw so they just… don’t use them. Like “Oh yeah, Mer has 3 kids… they’re fine.” Unless the kids are forwarding the story, they don’t exist. Which is never. It’s interesting, though, as we’re about to dive into the 300th ep that these idiot doctors who were babes a decade ago are now not only responsible for lives as doctors, but as parents. We’re a long way (and yet not, per last week’s ep) from sex in the on-call room.

Jen: Meredith complains about her mother, but at least Ellis brought Meredith to the hospital. 300 episodes is no small thing, especially these days. I feel like we’ve attempted to become fully functioning adults along with them through the seasons. I lived in four apartments during those 300 episodes.

Lisa: I went to and graduated from law school, got a job, and got married. Good lord. That’s terrifying to think about.

Jen: It is, actually.

Lisa: Should we dive in and see where she takes us for the 300th ep?

Jen: Let’s do this… Shondaland awaits.

Jen and I then watched the 300th episode of “Grey’s Anatomy.” (Really, that’s just such a ridiculous number; “ER” only had 331 episodes.) The episode…wasn’t that impressive. It discussed the early years of Meredith and Alex at Seattle Grace, now Grey Sloan, more than it probably ever has in the past.

The episode was nostalgia-filled, without ever using a single flashback, save for the original “sex on a gurney” credits. I didn’t like this no flashbacks choice. I would have preferred seeing baby George and baby Christina, instead of proxies who were stuck together (literally, this is a hospital where weird traumas retain some draw) after a roller-coaster accident, and, of course, are also med students at the other medical school in Seattle.

I think the actress who played not-Christina did a pitch-perfect job in evoking Christina, but it just made us realize what a hole Sandra Oh has left in the series. (And poor Lexie, Meredith’s dead sister, with barely a passing mention.) They did a good job memorializing Mark “McSteamy” Sloan, which, as Jen and I noted above, is our favorite and most missed character. The remembrance to him was so well done, we both got a little teary. And it’s one of the reasons we stick with this: every now and then, “Grey’s” will still surprise you with content that hits you directly in the feels.

Jen and I agreed that the use of music from that original season in this episode was what created the greatest sense of nostalgia for us. And not just within the show, but thinking of where we were in our lives at the precise moment when those songs were relevant. And even with the use of Season 1 music in this episode, this many seasons in, the music director is still occasionally picking out things that this middle-aged white lady wants to listen to later and seeks out on Spotify. Which is the point, I suppose. But still impressive considering just how long this show has been around.

We noted that as much as we enjoy 12 years ago “Grey’s” for being interesting and edgy in all the sex they were having, when a minor character had sex in an on-call room in the 300th episode, our logical brains wondered if the doctors were always carrying condoms in their lab coats and mentioned how unsanitary it seemed to be having quickies in the hospital. For both patients and staff. Time changes us all.

We also commented that “Grey’s” blind casting and body-type diversity continue apace, and that’s something we appreciate.

The episode relied heavily on its old tropes: misdirection as to who was injured, Alex’s long-established savior complex, Meredith’s desire to always do surgery over just about anything else, the doctors not ever wanting to go live their lives outside the hospital. (In fact, the cautionary tale of the “Grey’s” doppelgangers was “don’t ever leave the hospital, if you work all the time, nothing bad can happen.” This is patently false, as the list of terrible things that have befallen Meredith alone without her ever leaving the hospital would take a page to describe.)

But ultimately, this just felt like another episode of Grey’s and other than the mentioning of long-dead characters, didn’t feel particularly special or very Shondaland cliffhanger-like. I think our reaction to this milestone episode could best be described as “meh.” Which about tracks for our history with this show. And will not in any way keep us from tuning in next week.